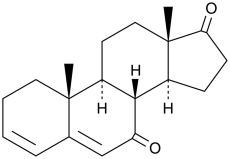 The Power Behind E-Control V3

Chlorophytum Borivilianum (extract) the roots are used traditionally in Indian subcontinent as aphrodisiac and sexual stimulant. Ethanolic extract of roots as well as sapogenins isolated from the roots were studied for effect on sexual behavior and spermatogenesis in albino rats. Administration of 100 mg/Kg and 200 mg/Kg b.w. of the sapogenin and ethanolic extract respectively had pronounced anabolic and spermatogenic effect in treated animals as evidenced by weight gains in the body and reproductive organs and histological studies. The treatment also markedly affected sexual behavior of animals as reflected in reduction of mount latency, ejaculation latency, post ejaculatory latency, intromission latency and an increase of mount frequency and attractability towards female.†
https://pubmed.ncbi.nlm.nih.gov/18412148/

Indole-3-carbinol (I3C) (a metabolic product of I3C in the gut) have been shown to improve Phase I detoxification of estrogens favoring the less potent 2OH estrone pathway. Although the 2OH estrone can also make DNA-damaging quinones, they are less adhesive to the DNA and therefore are probably only important when levels are very high (as can be seen with certain single-nucleotide polymorphisms [SNPs] of CYP1A1). These metabolites can be measured in the blood or urine to ensure that levels are low before starting I3C or DIM.†
https://bmccancer.biomedcentral.com/articles/10.1186/s12885-018-4518-z