A Guide to being a Sponsored Athlete 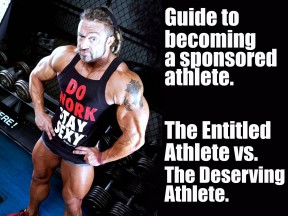 “The Entitled Athlete vs the Deserving Athlete”
“We live in an age of instant knowledge. And there’s almost a sense of entitlement to that.” – J.J. Abrams

When I think of this quote, I think of the age of instant gratification we currently live in. This is further magnified with such social networking gems as Facebook, Instagram, Twitter, Tumbler, Tout, Klout, YouTube, so on and so forth. I think of the trend (should I say “trending”?) of athletes assuming that being sponsored is something that they are entitled to, or at the very least, something they should have as quickly as they can update a status or get #Instagratification.

I see a myriad of alleged NPC superstar athletes posting up a parade of self-portraits in their bathrooms, selfies in the gym, a mid lift “pose” showing how hard they are working and last but not least… a picture of the stepmill monitor showing they have just done 1 hour of cardio and burned 890 calories… because no one in the history of all mankind has ever pushed themselves that hard before, and people MUST know. Don’t forget to #BeastMode #KillingIt #FitFam #Blessed on there to make sure people get the point!

The thing is, these athletes start to believe their own hype. They believe that because they have over 100 likes or get a few comments about how hot they are, how ripped they are, or how that is “so sick”, that they are somehow now prime candidates to be a featured athlete in the magazines, get a sweet new contract from a supplement company, or be featured in a video on MuscularDevelopment.com.

I have had people message me on Facebook, or better yet, making a post on a thread on Facebook, stating “Hey, I’d really like to be an athlete for your company, if you have any openings… hit me up!” I can’t tell you how many times I have been impressed with this! Oh wait, I can… zero. Better yet, the 6 page synopsis of their life story and what they can bring to the company. It’s like they are telling me a story I’ve seen 1000x before, but they feel they are bringing something unique.

So what can you do as an athlete to make yourself more appealing to the supplement and apparel companies? In a phrase, you need to market yourself. Let me lay it out for you simply and then explain what I mean. Here is a quick and clear of what you need.

1. A presence on social media;
2. An ability to represent yourself well in both verbiage and writing;
3. An ability to increase the ROI (Return on Investment) of the company you are looking to work with;
4. Finally, a good look/contest history/personal style.

I listed a presence on social media first, but that does not mean bombarding twitter, Facebook and #Instagram with tons of pictures and getting likes. A strong social media presence is judged by an objective scoring on how “loud” you are across the various networks. KLOUT.com is a website that can effectively tell you how dominant you are on social media. The KLOUT score is like the Richter Scale – the higher you get on the scale – the bigger the difference between the scores. If you have something in the 70’s you are really ahead of the ballgame. Don’t think of mentioning your score (or your social media presence) as an asset unless you are in the 70’s.

If I could get just 5 athletes who could speak on camera without using “Um” every other word and could write and get their point across as a Renaissance man or woman, my job would be a lot easier. Putting up a video log or “VLOG” where you can articulate your training, nutrition and a positive message to the community is a valuable asset. So is the skill set of scribing a wondrous blog for a potential company. In fact, you should start making your own VLOGS and writing your own BLOGS for you now… host them on sites like YouTube and WordPress. Establish a history so when you go to a company you have a digital resume to show them!

If NOBODY knows who you are outside of your friends… what company would hire you to be a sponsored athlete? You cannot just compete and look good. Everyone does that, so you have to stand out. Being an just an IFBB Pro isn’t as big of a deal anymore. There are many, many IFBB Pros now, especially in the physique and bikini divisions. So if you are going to talk about it, be a top IFBB Pro contender. Mentioning National Level competitor is about as useful as saying you wear Nikes.

Every company makes investments and expects a return on those investments. If you want a supplement contract for cash and supplements – what can you offer to the company to make it worth their while? I’ve had people tell me “I will compete as a bodybuilder or physique guy in return for $300 in supplements and $500 cash a month.” Here’s the thing, you are already competing as a bodybuilder and would do so regardless if you got the contract or not. What would you do for MY company? If I give you $300 in supplements, how can you get me $3000 in sales? Do you know owners or managers of supplement stores who could carry my line? Do you have an audience? Are you a personal trainer with competitors who will buy my products? Furthermore, if you HAVE all of that, do you have a history of selling supplements to those audiences? Have an argument on how you will or can benefit a company and you will bolster your stance to get signed on.

Of the least importance is how well you do in your competition. Sure, it’s a nice accolade to have on your resume, but if you can’t speak or write you are useless to a company. Let’s face it, unless you are winning pro shows, winning an NPC show, by itself, isn’t reason enough to sign you. Personal style on the other hand or having what I call a gimmick can go miles. Now, I’m not suggesting you put in dreadlocks extensions, have a sexy nickname and have an outward personality of a WWE wrestler… but it has worked for people in the past. Be your own person, don’t try to be the next Sadik Hadzovic or the next Andy Hamon… they already have a lock on who they are. Be yourself, but show enthusiasm for what you do! You could be the next bodybuilding internet superstar.