8 Myths About Meat and Health Debunked 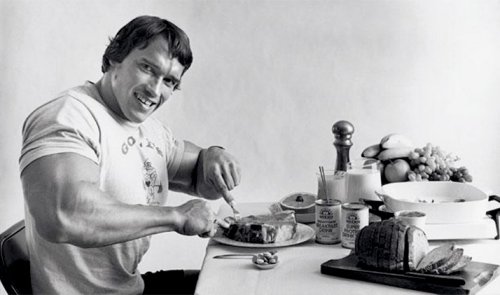 1. Meat Rots in Your Colon

Some people claim that meat doesn’t get digested properly and “rots” in your colon. This is absolute nonsense, probably invented by dishonest vegans in order to scare people away from eating meat. What happens when we eat meat, is that it gets broken down by stomach acid and digestive enzymes. In the small intestine, the proteins are broken down into amino acids and the fats are broken down into fatty acids. After that, they get absorbed over the digestive wall and into the bloodstream. There’s nothing left to “rot” in your colon. If you want to know what really “rots” in your colon, it’s indigestible plant matter (fiber)… from vegetables, fruits, grains and legumes.

The human digestive system doesn’t have the enzymes necessary to break down fiber, which is why it travels all the way to the colon.

There, it gets fermented (rots) by the friendly bacteria in the intestine, which turn it into nutrients and beneficial compounds like the short-chain fatty acid butyrate (1).

This is what keeps the friendly bacteria alive and many studies are showing that feeding these bacteria properly is incredibly important for optimal health (2, 3).

So, meat doesn’t rot in the colon. Plants do… and this is actually a good thing.

Bottom Line: The nutrients in meat are broken down and absorbed way before they reach the colon. However, fiber from plants does ferment (“rot”) in the colon, which is actually a good thing as it feeds the friendly bacteria.

2. Meat Is High in Harmful Saturated Fat and Cholesterol

One of the main arguments against meat, is that it tends to be high in both saturated fat and cholesterol.
But this really isn’t a cause for concern, because new science has shown both of them to be harmless.
Despite being seen as something to be feared, cholesterol is actually a vital molecule in the body.

It is found in every cell membrane and used to make hormones. The liver produces large amounts of it to make sure we always have enough. When we get a lot of cholesterol from the diet, the liver just produces less of it instead, so the total amount doesn’t change much (4, 5).

In fact, in about 70% of people, cholesterol in the diet has negligible effects on cholesterol in the blood (6).
In the other 30% (termed hyper-responders), there is a mild elevation in LDL cholesterol, but HDL (which is protective) also goes up (7, 8). The same is true with saturated fat, it also raises HDL (the “good”) cholesterol (9, 10).

But even when saturated fat and/or cholesterol cause mild increases in LDL, this is not a problem because they change the LDL particles from small, dense LDL (very bad) to Large LDL, which is protective (11, 12).

Studies show that people who have mostly large LDL particles have a much lower risk of heart disease (13, 14).

Therefore, it is not surprising to see that in population studies that include hundreds of thousands of people, saturated fat and cholesterol are not associated with an increased risk of heart disease (15, 16).

In fact, some studies show that saturated fat is linked to a reduced risk of stroke, another very common cause of death and disability (17).

When they put this to the test in actual human experiments, making people cut saturated fat and replacing it with “heart healthy” vegetable oils (which happen to lower cholesterol), it actually increases the risk of death (18).

Bottom Line: It is true that meat tends to be high in saturated fat and cholesterol, but this is not a cause for concern because they do not have adverse effects on blood cholesterol or increase the risk of heart disease.

Strangely enough, meat is often blamed for Western diseases like heart disease and type 2 Diabetes.
Heart disease didn’t become a problem until the early 20th century and type 2 diabetes only a few decades ago.
These diseases are new… but meat is an old food. Humans and pre-humans have been eating meat for millions of years (19).
Blaming an old food for new health problems makes absolutely no sense.
Fortunately, we do have two very large, very thorough studies that can put our minds at ease.

In a massive study published in the year 2010, researchers pooled data from 20 studies that included a total of 1,218,380 individuals. They found no link between consumption of unprocessed red meat and heart disease or diabetes (20).

Another major study from Europe that included 448,568 individuals found no link between unprocessed red meat and these diseases (21). However, both of these studies found a strong increase in risk for people who ate processed meat.
For this reason, it is very important to make a distinction between the different types of meat.

Many studies apparently showing that “red meat” is harmful didn’t adequately make the distinction between processed and unprocessed meat. Processed foods in general are pretty awful… this isn’t just true of meat.

Bottom Line: Many massive studies have examined the relationship between meat consumption, heart disease and diabetes. They found a strong link for processed meat, but no effect for unprocessed red meat.

One common belief is that meat, especially red meat, causes cancer. This is where things get a bit more complicated.
It is true that processed meat is associated with an increased risk of cancer, especially colon cancer (22).
But when it comes to unprocessed red meat, things aren’t as clear. Although several studies suggest that even unprocessed red meat can raise the risk of cancer, review studies that pool the data from many studies at a time show a different picture.

Two review studies, one that looked at data from 35 studies and the other from 25 studies, found that the effect for unprocessed red meat was very weak for men and nonexistent for women (23, 24).

However… it does appear that the way meat is cooked can have a major effect on its health effects.

Several studies show that when meat is overcooked, it can form compounds like Heterocyclic Amines and Polycyclic Aromatic Hydrocarbons, which have been shown to cause cancer in test animals (25).

There are several ways to prevent this from happening… such as choosing gentler cooking methods and always cutting away burned or charred pieces.

So the answer is not to avoid red meat, but to make sure not to burn it.

Keep in mind that overheating can cause harmful compounds to form in many other foods. This is NOT exclusive to meat (26).

Bottom Line: The link between unprocessed red meat and cancer is very weak in men and nonexistent in women. This may depend on the way meat is cooked, because overheating can form carcinogens.

5. Humans Are Naturally Herbivores and Not “Designed” For Meat Consumption

However… this is completely false. Humans and pre-humans have been eating meat for a very long time and our bodies are well adapted to meat consumption (27, 28).

Our digestive systems really don’t resemble those of herbivores at all. We have short colons, long small intestines and lots of hydrochloric acid in the stomach to help break down animal protein (29).

The length of different parts of our digestive system is somewhere in between the lengths typical for both carnivores and herbivores, indicating that humans are “designed” to be omnivores (30).

It is also believed that our consumption of animal foods helped drive the evolution of our large brains, which set us apart from any other animal on earth (31). Humans function best eating both animals and plants. Period.

Bottom Line: Humans are well equipped to make full use of the nutrients found in meat. Our digestive system reflects a genetic adaptation to an omnivorous diet, with animal foods as a major source of calories.

6. Meat is Bad For Your Bones

Many people seem to believe that protein is bad for the bones and can lead to osteoporosis. The theory goes like this… we eat protein, which increases the acid load of the body, then the body moves calcium from the bones and into the bloodstream to neutralize the acid.

There are in fact some short-term studies to support this. Increasing protein does lead to increased calcium loss from the body (32). However, this short term effect does not appear to persist because the long-term studies show that protein actually has beneficial effects on bone health (33).

There is overwhelming evidence that a high protein diet is linked to improved bone density and a lower risk of osteoporosis and fractures in old age (34, 35, 36). This is a great example of where blindly following the conventional wisdom in nutrition will lead to the exact opposite result.

Bottom Line: Despite protein causing increased calcium loss in the short term, the long-term studies show that a high protein intake is linked to improved bone density and a lower risk of osteoporosis and fractures.

It is often claimed that meat is unnecessary for health. This is actually kind of true… most of the nutrients in it can be found in other animal foods. But just because we can survive without it, it doesn’t mean that we should… quality meat has many nutrients that are good for us.

This includes quality protein, vitamin B12, creatine, carnosine and various important fat-soluble vitamins, which vegans and vegetarians are often lacking in.

Whole foods like meat contain way more than just the standard vitamins and minerals that we’re all familiar with it. There are literally thousands of trace nutrients in there… some of which science has yet to identify.

The fact is, humans evolved eating meat and evolution designed our bodies with these nutrients in mind. They are an essential part of the immensely complex biological puzzle.

Can we live without meat? Sure… but we won’t reach optimal health, making use of all the beneficial nutrients that nature has provided us with.

Although we can survive without meat, the same could be said of most other food groups… including vegetables, fruits, legumes, fish, eggs, etc. We just eat more of something else instead.

Quality meat is pretty close to being the perfect food for humans. It contains most of the nutrients we need.

There is even a study in the literature where two guys ate nothing but meat and organs for a year and remained in excellent health (37).

Of course, not all meat is the same. The best meat comes from animals raised on pasture, fed the types of foods they would eat in nature.

Bottom Line: Some claim that meat is unnecessary. Although it is true that we can survive without it, there are still many nutrients in there that are important for optimal health.

Meat is often believed to be fattening. This seems to make sense on the surface because most meat is pretty high in fat and calories. However, meat also happens to be one of the best sources of highly bioavailable protein. Protein is the most weight loss friendly macronutrient, by far.

There are also studies showing that if you increase your protein intake, you automatically start eating less of other foods instead (42).

Several studies have found that by increasing the amount of protein in the diet, people automatically cut calorie intake by several hundred calories per day, putting weight loss on “autopilot” (43).

Also, let’s not forget that low-carb and paleo diets, which tend to be high in meat, lead to significantly more weight loss than diets that are lower in meat (45, 46).

If anything, the more you eat of high quality meat (and less of other foods instead), the easier it should be for you to lose weight.