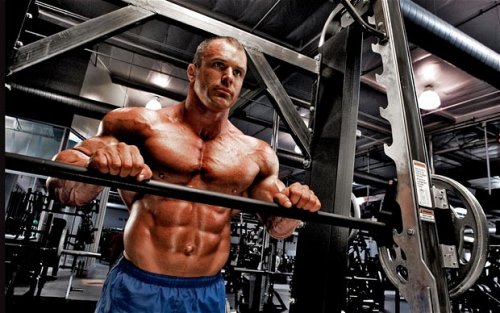 Amongst the old-school BB’rs it was common practice to “bulk-up” when attempting to gain muscle. This went on for decades, with everyone from beginners to professionals ascribing to this method of mass-gaining. It was well understood that in order to get big, one needed to eat big…and eat big they did. Despite the relative lack of knowledge available in those days, this approach allowed many to pack on muscle at an astounding rate, often with minimal and in some cases no chemical enhancement.

The off-season was ruled by a time of culinary indulgence, in which food choices were centered primarily around high protein selections such as meats, eggs and milk, with carbohydrates being viewed as less important. Still, the sheer amount of food consumed by some of these men was legendary and is no doubt responsible for birthing some of the most outrageous tales of food consumption ever witnessed by the weight training community…or any community for that matter. At times their eating habits could more accurately be described as a feeding frenzy than dinner, with one man having been recorded as guzzling down an entire tank of water—which just so happened to contain dozens of “live” goldfish. I guess that’s one way to get in your daily protein requirements, although I would be curious to know if such an event was ever repeated, given the large content of bones which had to make their way through the digestive tract.

Out of all the BB’rs who came up in the early days of the iron game, Bruce Randall was probably the most well known for his off-season eating habits. Starting at a scant 164 pounds, Bruce was able to increase his bodyweight to 192 lbs after just 58 days. Not too shabby, but nothing which hadn’t been accomplished many times before. However, Bruce didn’t get serious about his weight gain until his last year in the marines, in which he raised his bodyweight from an all too common 203 lbs to a massive 342 lbs in just 14 months. By that point Bruce was able to do the following lifts: A max-single good-morning of 685 lbs (a truly monumental lift), supine press with 482 lbs, a standing overhead press with 365 lbs for a double, a strict barbell curl with 228 lbs, ¼ squats with over 2,100 lbs.

While none of these lifts would be considered extraordinary (outside of the good morning and ¼ squat, which isn’t done anymore these days), the fact that Bruce achieved these numbers in such a short period of time while remaining 100% drug-free is truly mind-blowing (Note: This was done in 1954, prior to the advent of AAS in American athletics, which was still a couple years off). It goes without saying that of the 139 lbs Bruce gained during this time (178 lbs in total), a considerable portion of it was bodyfat. Still this does not take away from the fact that it was Bruce’s dietary habits which played the largest role in his body’s ability to add mass & strength so quickly. It should also be added that Bruce later decided to ‘cut-up’, after which he took home the NABBA Mr. Universe crown—one of the most coveted titles of his day.

So, just what did Bruce eat to achieve such rapid gains in mass & strength without the assistance of drugs? As Randy Roach, in his excellent book Muscle, Smoke, & Mirrors, recounts, Bruce would regularly consume 2 quarts of whole milk, 28 fried eggs, and half loaf of bread for breakfast alone. As a supplement to his regular meals, he would drink 8-10 quarts of milk per day, and it was not uncommon to see him fill nearly an entire cafeteria tray with rice & pork, which he would eat in a single sitting.

It is hard to equal Bruce in the eating department, but 3X World Strongest Man, Bill Kazmaier, was no slouch himself. Although recognized by the masses for achieving a level of strength previously thought unattainable, he was also known for his humungous appetite by those who knew him best. By putting in as much time at the dinner table as the gym, Bill added a staggering 100 lbs of muscular bodyweight and brought his bench up to 600 lbs within his first 2 years of training alone! By the following year and at only 25 years of age, Bill had reached a massive 340 lbs and was on par to hit a 700 lb bench press before tearing his pec during the annual WSM competition. Eating whole turkeys and other similar dietary feats was considered routine in Bill’s daily life…and both his bodyweight and herculean strength were the proof.

These days the “bulking” method has largely fallen out of favor among competitive and non-competitive BB’rs alike. Opting instead for the “lean gains” approach, today’s physique enthusiast more closely monitors his food intake than those of the former generation, which enables them to maintain a tight and hard physique year-round. With such a stark difference in beliefs among the different generations and with a much greater degree of knowledge available today, many have come to the conclusion that the original BB’ing elite were simply misguided—that such monstrous eating serves no other purpose than making it more difficult to get in shape come contest day, but is this the entire truth or is there more to the story? Well, it depends on the circumstances.

Before we attempt to answer this question, let’s first define the meanings behind the terms “lean mass-building” and “bulking”. In decades past bulking was traditionally described as a method of eating designed to add muscle mass as quickly as possible via caloric excess. Although protein foods were favored, there was little discrimination when it came to food selection and no set meal plan—the BB’r would simply eat as much as he could throughout the day. This often resulted in 1000,’s of extra calories being consumed on a regular basis. When combined with a relative disregard for the types of calories being eaten, it is not surprising that proponents of the bulking method often accumulated an unacceptable amount of body fat.

While the old-school BB’rs may not have understood the science of nutrition as well as we do today, one thing they did understand is that the body will only grow as quickly as possible when calorie-nutrient availability is optimal. If you share similar priorities in terms of maximizing growth rate, then the fastest way to accomplish this goal is to eat as much as the body can tolerate without adding an unacceptable amount of fat. Obviously, if you start morphing into a fat hog in record time, then you have exceeded your caloric surplus by too large of a margin, but why gain any fat at all? Can’t we just eat only what the body needs to maximize growth without adding any fat? Although this would be ideal, the truth is that none of us can really know when we reached this point until we have exceeded it…and the only way to know we have exceeded it is through fat gain.

Fat gain is the “proof”—the evidence that the body has been supplied with all the calories-nutrients it needs to maximize growth. In the same way, if someone never adds any body fat…or barely any, what are the odds that they are perfectly straddling that fine line between maximum growth and fat gain? Basically non-existent. In this case, the lack of fat gain experienced by these individuals is the “proof” that they are not eating enough to maximize growth. There are just too many variables involved—many of which cannot be accurately tracked due to their internal and constantly fluctuating nature—which prevent us from accurately determining our optimal caloric intake. For this reason, if we want to grow as fast as possible then some fat gain is inevitable. Now, there is no reason to completely abandon our aesthetic standards in favor of a Pillsbury Dough Boy appearance, but slow, consistent fat gain should be accepted as part of the deal when we want to pack on muscle at the most rapid rate possible.

For professional BB’rs whose livelihoods depend on placing well in competition, this is not necessarily so. In fact, such an approach is likely to be counter-productive to their goals, as many pros have already built most (and in some cases all) of the mass they will ever require, negating the need for an extreme mass-gaining diet. With competition success now being the #1 priority, the typical pro will be better served by staying lean in the off-season, as this will allow him to more easily maintain size during prep and in most cases, achieve superior conditioning. There are also certain cosmetic benefits attached to this practice, such as tighter skin and reduced stomach distension, both of which positively contribute to the BBr’s overall look. As a final consideration, a less rigorous diet also places less stress on the body in general.

Pro BB’rs, fitness models, MPD competitors, those with regularly scheduled photo shoots or other industry obligations, or anyone else who places greater importance on staying lean for whatever reason, will probably be better off using the lean-gains approach, as this will allow them to continue making progress, albeit more slowly, without jeopardizing their other short or long-term goals. In any case, the approach you take to building your ultimate physique will be dictated by your priorities. Most advanced competitors have more to concern themselves with than just growing muscle tissue and therefore, will need to ensure that their off-season plan coincides with the bigger picture. However, when it comes to the non-competitor who just wants to get big, they gave the luxury of being able to focus solely on mass-gaining and their program can potentially reflect that.

As you can see, there really isn’t a “best” way to go about gaining muscle mass. While many of today’s top coaches espouse the lean-gains approach, you should remember that they are usually dealing with top competitors—many of whom earn a living in the sport. Their situation is quite different than the non-competitor who just wants to get big. Do not just blindly follow along with the program of another because it was used by a professional BB’r. The bottom line is that each individual is unique and will need to consider both his/her short and long-term goals before being able to put together their ideal off-season plan.