Are You Suffering From Andropause? 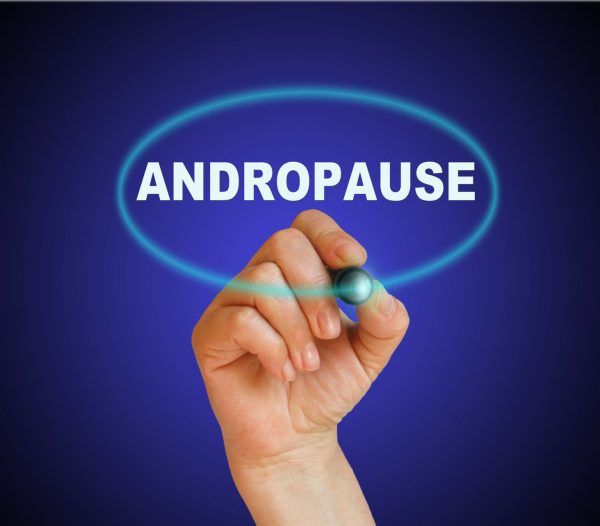 We’ve all heard of menopause, right? It’s when a woman goes through the “change of life,” meaning that she’s leaving her reproductive years behind. It’s a transition period where her body produces less hormones, causing all sorts of physical changes. When going through menopause, most women experience emotional changes as well. Mood swings are common. As men, we’ve always stood on the sidelines watching our women go through this change, feeling bad for them of course but secretly thinking, “glad it’s not me!”

Not so fast, because there’s a growing body of evidence that shows that women aren’t the only ones to go through a change of life as they get older-it seems that men do too, but instead of menopause, it’s called andropause.In men though, the change is significantly different in that our reproductive systems don’t totally shut down (whew!). What does happen though is that like women, our bodies produce lower levels of hormones-in our case testosterone anddehydroepiandrosterone. Testosterone is of course the principal male hormone. It’s produced in the testes and is the anabolic steroid that makes us men. It’s also a primary driver in making us strong and building muscle mass. Dehydroepiandrosterone is also a steroid, but this one is produced by the adrenal glands. This is actually the most abundant steroid in the body, but it’s effects on the body are somewhat different than testosterone. Dehydroepiandrosterone is also synthesized in the brain so it seems to impact neurological functions as well.

Although as men pass through andropause their reproductive systems don’t totally shut down like they do in women, their bodies can go through significant changes that are driven by the drop in testosterone and dehydroepiandrosterone levels. Studies have found that after about age 30, testosterone levels may decline an average of 2% a year in men. Once the drop in hormone levels reaches a certain point, guys start to feel the symptoms of andropause. The first medical study on male andropause was actually conducted in the mid-1940s and published in the “Journal of the American Medical Association.” Interestingly though, it’s only recently that the U.S. medical community has taken notice of this condition.

The effects of andropause include:

These are some, but not all of the symptoms that men often experience as a result of going through “male menopause.” 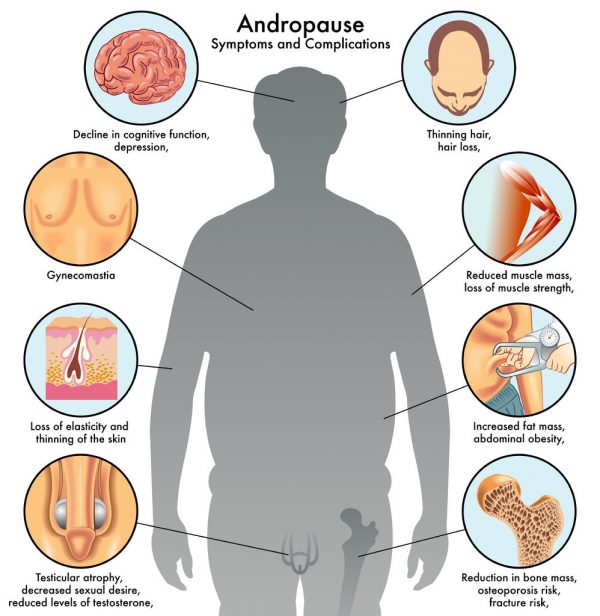 For most guys, one of the first outward signs of andropause will be an increase in body fat around the middle and in the pectoral area (man boobs). The other outward sign of the decline in hormone production is going to the loss of lean muscle mass and a reduction in strength. Lower testosterone levels can be directly correlated with decreased synthesis of muscle proteins, which results in less strength and less mass. The third sign of the onset of andropause is reduced sexual functioning and loss of sexual desire. These physical symptoms combined with the emotional ones can make andropause a very difficult time in a man’s life.

All is not lost though and you don’t have to resign yourself to going through “the change” and becoming less of a man than what you want to be. First, there are a number of things you can do right now to significantly reduce the potential impact that andropause might have on your life. One of the most important things you can do is exercise regularly and make sure that your training routine includes weight lifting. This is actually one of the most important things you can do to stimulate the body’s natural testosterone factories. A lean, muscular, active body produces far more testosterone than a lazy flabby one.

Also, watch your diet, sticking with whole grains, lean proteins and complex carbohydrates. Through in a small handful in nuts every couple days too. Avoid eating processed foods and stay away from sugar, excessive caffeine and don’t go out boozing it up every night. Be sure to get lots of rest and a good night’s sleep. It’s very important to give your body plenty of time to recover between training sessions. And here’s something else you can do and I know you’ll like this one-have sex, especially in the morning. Having sex stimulates testosterone production but you’ll pump up production even more by having sex in the morning, according to a German study. For some guys, hormone replacement therapy might be the answer. In any case, knowing the facts and being proactive are the best things you can do.

However I wouldn’t recommend that. It’s probably a better idea to try a natural testosterone boosting supplement like IronMag Labs Ultra Male Rx.

The Difference Between Steroid Abuse and HRT

There’s no getting around the fact that our bodies age. For men, as we get closer to the middle age mark, natural testosterone production in the body begins to slow down by about one to two percent each year-though this can vary widely. Around age 50 or so, about one-half of men will experience what’s known as “andropause,” which is the result of declining levels of androgen in the body. To fight the symptoms of andropause many men turn to either steroids or hormone replacement therapy (HRT).

The symptoms of andropause will vary from one man to another but may include a decrease in energy (lethargy), diminished libido or less interest in sex, erectile dysfunction (ED), muscle weakness, difficulty sleeping, hot flashes, night sweats, mood swings or depression and more. Because of the symptoms’ similarity to what women experience in menopause, andropause is sometimes referred to as the “male menopause,” although in men the reproductive system does not shut down entirely as it does in women-it just slows down.

Steroids are no stranger to the fitness/bodybuilding world but today more and more “regular guys” are taking steroids in an effort to combat the effects of andropause and reduce its impact. While legal steroids do have a place and serve useful, medically-valid purposes, they are frequently abused. Part of this stems from their widespread availability in gyms, health clubs, online from Internet pharmacies, friends and more.

Besides being illegal without a prescription, steroids-when taken without proper medical supervision-are known to cause a variety of health problems. The short-term adverse physical effects of anabolic steroid abuse are fairly well known, but the effects of their long-term use are not well-studied.

The real problems arise when steroid users become steroid abusers. They buy their steroids at the gym or from a friend, self-administering them and regulating their intake themselves, rather than under the guidance of a trained medical professional. This is a recipe for disaster. When someone buys steroids off the black market the potential for dangerous repercussions is astronomical.

First of all, when buying steroids off the black market you never really know what you are going to get. The majority of steroids sold on the streets in the U.S. come from other countries where quality standards can be very lax at best. It’s also very common to take steroids prepared for animals rather than for humans because they are usually cheaper-but also potentially very dangerous. There is also a prevalence of fake or counterfeit steroids on the U.S. black market. These can not only be dangerous, but they can be deadly as well.

Without getting into the subject in detail-entire books have been written about it-suffice to say that the list of potential side effects of self-regulated/self-administered steroid therapy (abuse) is long. Mood swings, fluid retention, thinning or loss of hair, infections, testicular atrophy and the risk of blood-borne diseases are a few of the risks. However many medical professionals state that all drugs have side effects and risk should always be compared to the potential reward. In contrast to self-regulated/self-administered steroid abuse, Hormone Replacement Therapy (HRT) is a medically supervised regimen that seeks to duplicate the body’s natural testosterone production cycles. Administered properly, HRT can bring about the benefits of restoring testosterone to its previous level, without the significant side effects or safety hazards associated with self-regulated/self-administered steroid regimens or abuse.

HRT starts with a blood test and medical examination to determine testosterone levels and uncover any potential health risks. This is an important-and necessary–step in order to be certain that testosterone deficiency is indeed the root of the andropause symptoms and not diabetes, hypertension or the result of taking certain medications.

Through HRT testosterone is administered orally, by injection or through trans-dermal systems (through the skin). A fourth method-a tablet that adheres to the surface of the gum-was recently approved by the FDA. HRT has proven beneficial to men suffering from symptoms of andropause resulting from a testosterone deficiency in a number of ways including:

These are just some of the benefits that are associated with a properly-administered, medically-supervised HRT regimen.

While many of us like to think that we’re smart guys and know what we’re doing with our own bodies, the risks associated with self-administered/self-regulated steroid regimens far outweigh any potential benefits. And in addition, the potential for abuse is great. If you think you may be suffering from andropause/testosterone deficiency, do yourself a favor and consult a qualified medical professional and investigate hormone replacement therapy as a treatment, not your friends at the gym.