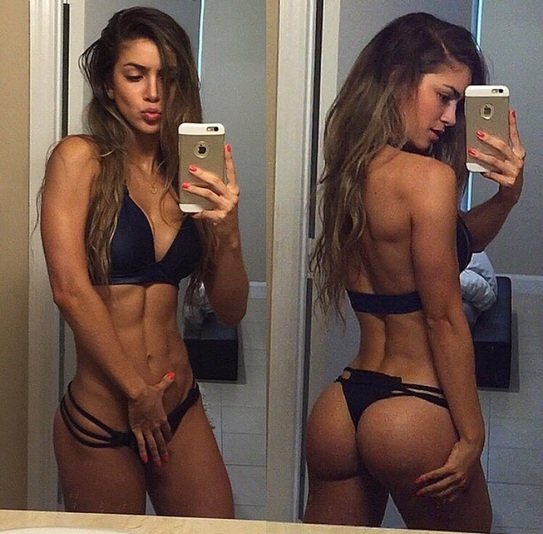 Social media can be a terrible platform for people to sit on. With internet bullies across the globe, exposing yourself and your family through the use of “selfies” can be a scary thought, sometimes even dangerous. But what if you simply don’t care? Let the negativity roll right off your shoulders. You can’t please everyone. You want to do something to keep yourself accountable for your health. And that’s exactly what one strong woman did.

When it rains it pours

Justine McCabe, like so many, was going through a rough period of her life. Her mother and husband died within two years of each other. Her mother passed away from chemotherapy complications combined with obesity. Her husband and partner in life was struggling with depression when he decided to end his life. Justine found herself in a downward spiral and found comfort in food—lots of it. In fact, she became so comfortable with food that she gained over 100 pounds. Looking in the mirror at what she had done, she decided to take action and take back her life.

The internet is full of fat-shaming individuals who hide behind keyboards and computer screens. Many of these individuals use fictitious screen names and would never say anything negative to someone’s face—they are cowards who try and act tough online to make up for their own insecurities. What Justine did is something most people would cringe over simply because they know the ramifications that could spiral out of control online. Justine decided she was going to post her weight loss journey online—more specifically, post selfies. While not every daily selfie image was put up on social media, Justine was religious about taking a daily photo of herself and looking at comparisons from previous dates.

In general, selfies are taken daily by those who want to let the world know just what they look like. Some are taken to gloat about things they have or are doing, while others simply want to show off their appearance, make a funny face, or share a moment in time. At 313 pounds, Justine was sharing her most uncomfortable moment of time, but hoping the outcome would be life changing. She mentioned that she would look at herself and notice she had lost her smile, her joy, her love, and needed to regain that. Her hope was not only to lose weight, but see her expression change as the photos progressed.

Your decisions don’t only affect YOU

What has been left out of this story thus far and a huge factor in my eyes, is that Justine is also a mother of two young boys. Not only has her decision to use food to cope damaged her life, which led her to weight gain, but her actions are also seen and felt by her sons. After the loss of her husband, she is the only parent in the household to care for the children. She needs to live for them. But she needed to want to make the change for herself.

A new chapter to write

Her selfie story started her first day at the gym. Justine took a picture to show her friends and family that she was there—and she never stopped. Her first workout was 60 minutes on the elliptical trainer. It wasn’t easy, but she knew what needed to be done. In the first 30 days she lost 30 pounds. She changed her activity levels and eating habits in order to lose the weight. She was 100% committed to taking back the life she once had. Then after another 6 months went by, Justine jumped on the scale to see a total weight loss of 75 pounds to date. Later that year she was down another 49 pounds after she decided to begin working with a personal trainer. Now, she hopes to drop another 20 pounds. Her Instagram page has grown to over 76,000 since she began. Her journey has inspired many individuals around the globe to take charge of their life and change their unhealthy habits.

It was through accountability and taking daily selfies that Justine was able to make her transformation a reality. She was quoted saying, “A little ‘secret’ I’ve come to realize. It’s NOT about losing the weight. It’s about truly transforming your life. The time is now, our tomorrow is not promised.” And she’s right. The time is now to take charge of your life. Whether you decide to take the path Justine took and snap selfies every day to compare and keep yourself accountable or by simply following a diet and exercise program daily, you need to start today. Too many people say they will start tomorrow, or next week, or next month once things slow down. The truth is, there’s never a “best time” to start exercising and changing your eating habits. You simply need to make it a priority in your life. People who say they don’t have time simply don’t find their health as a priority—it’s that simple. People make time for things that they consider a priority. What was gained from the television shows people watch 2+ hours every night which they obviously made a priority in their “busy life”. Little do they know that once their health starts failing, they will see how much free time they actually had to make a difference and be preventative. But by that time it’s unfortunately too late.

Don’t workout or change your eating habits simply because I said you should, or your friends said you should. Do it for you. Do it so that you can live a healthy life and see your kids grow up and be able to see your grandchildren. Start taking control of your life now so you have the quality of life down the road as you age to be able to do things most at that age can’t. Think about how many elderly individuals count on others to do almost everything for them. What if at that age you didn’t have to rely on anyone? And if you take control of your life TODAY you might not have to. The time is now. Right now. Make a difference in your life today to give yourself a brighter future tomorrow. Take nothing for granted. Nothing in life is guaranteed other than the fact that we were born into this world, and we will one day be taken out of it.