Young Freaks: Is It Progress or Cause For Concern? 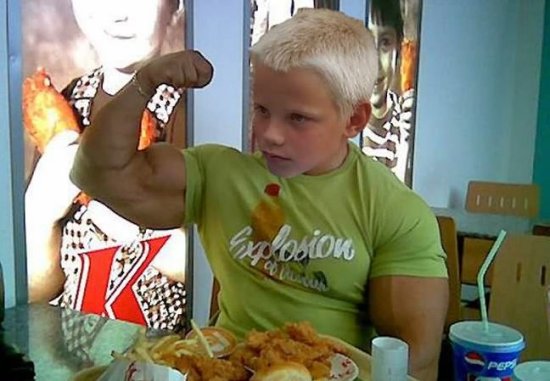 The current state of the top ranks of professional bodybuilding is a topic of hot debate lately. Consistency, quality, and the execution of events in general have been called into question. Similarly, the number of bodybuilders in amateur events seemingly continues on the path of being swallowed by overwhelming entries in the MPD and female divisions.

There is one area that is full of new life and showing more enthusiasm than previous years, and that is the junior ages and bodybuilders under 21 in general. And depending on how you look at the situation, it could be viewed as a potential return to the days of fierce young pros forging careers in their 20’s and retiring young, or a manifestation of the careless mentality we have seen online and reckless use of drugs.

I recently attended a state level show which had 6 entries in the junior class, which was age regulated to ages 18 and under. Out of the six, four of them held impressive amounts of muscle mass. Although not proportionately developed like a matured competitive bodybuilder or possessing the body control that comes with experience on stage posing, they held enough size to compete in their appropriate weight classes based on their height in the open. It looked almost as if the size had come quicker to them than they had time to adjust to, as they stood awkwardly and hadn’t figured out how to properly display what they had. This is not a knock on their efforts though, (we can see professionals act in similar fashion at IFBB contests) but rather further proves how much size they seemingly had slapped on in such a short time.

The bad news? I wouldn’t necessarily say these kids were genetic specimens in throwback fashion to the Shawn Rays and Lee Priests of the world, achieving size at such a young age. Gyno was apparent on at least half of them, and they were definitely pushing the boundaries chemically.

Is this a sign of future hope for our sport or just more evidence of it’s demise? More people are getting into fitness than ever before, but it’s hard to gauge the percentage who are passionate about bodybuilding compared to the ones who just want the instant gratification. The cycles of AAS we see being cited from people seemingly brand new to the lifestyle is alarming. Some will argue that has always been the case and people are just being more truthful now, but the purist in me tends to believe that’s not the case. In no way am I saying drugs are not or shouldn’t be part of the sport (you would have to pay me to watch a natty competition), but to see people push the envelope right out of the gate should be cause for concern. It’s one thing for genetically elite to use a little bit in the beginning, and then a lot to become the best in the world, but what happens when non-elite specimens use a lot in the beginning and have nowhere to go but up?

If anyone reading this follows the general subculture of bodybuilding on social media through facebook groups and instagram, you will see more and more young adults and teenagers redlining it on a quick path to the physique they desire. The unfortunate part of the equation is that most people in this age demographic don’t possess the foresight to take all the health precautions and preventative measures that perhaps a competitor a decade or two older would. Sure, it might be hypocritical for anyone to tell someone they are too young to take gear when they themselves are on the same amount, but how many of these kids are spending the money required to supplement with vital products to help their longevity? How many are getting bloodwork done and having it properly analyzed and DOING something about any abnormal markers? Are any of them donating blood?

It’s a difficult situation to understand. On one hand, it’s likely to breath new life into the sport and we might see a much deeper field of competition on national stages in the forthcoming years. On the other hand, if there isn’t precautions being taken, we could also being seeing a deeper field of health problems for years to come if the new crop doesn’t possess the maturity to do things right.