Did Lee Haney Retire Because of Dorian Yates? 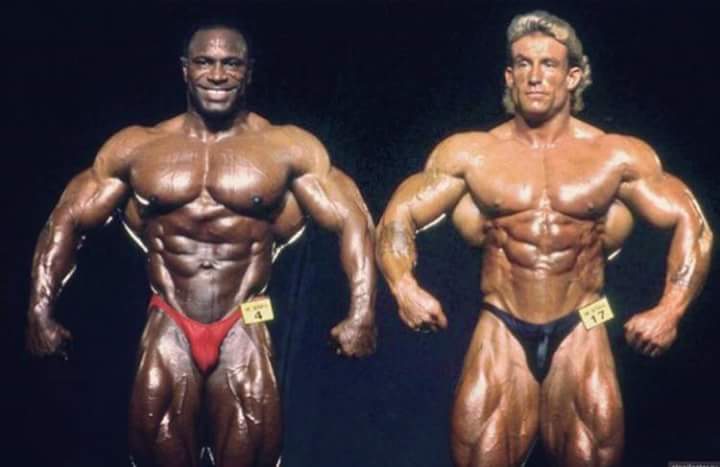 Whenever I watch Blood And Guts, I always remember the line where 6x Mr. Olympia Dorian Yates suggests that 8x Mr. Olympia Lee Haney saw some kind of writing on the wall at the 1991 Mr. Olympia, that he took such notice of Yates, that, arguably, the greatest bodybuilder of all time, decided it was nice time to hang ‘em up, to retire. That seems like a stretch, even if we’re talking about The Shadow himself. Haney, unlike most retiring Mr. Olympias, ended his career at a very young age, without any major injuries, and could have easily continued his reign by as much 2-3 more years.

By 1991, however, he really had nothing left to prove. He’d won eight titles, consecutively no less, and had truly grown the sport of bodybuilding. In fact, Haney even served in a government post. It was symbolic, but it furthered the sport. Additionally, Haney represented family values, faith, and a sincere attention to many of the values that younger generations don’t pay as much mind to. Haney was, is, and always will be, a role model for us all. But the 10,000lb elephant in the room remains, did Haney retire because of Yates?

Dorian Yates represented a new look and oftentimes that alone can create a great deal of fan interest & participation. We should also remember that this was the early 1990’s – there was no internet – in fact, I don’t even think they had beepers or pagers. People swore by the magazines and they’d race to the newsstands to get each new copy. When Yates took runner-up at the Night of Champions, that must have created unimaginable buzz, because Yates had the size to give Haney a run for his money, but he also had crazy conditioning, not to mention a very (rarely seen) grainy look about him, and tons upon tons of self-confidence. That last one is a big one. Bodybuilders, even those who work with incredible genetics and who come in perfectly dialed in, many lack that internal fire. A champion isn’t a champion unless they own the stage. A champion that’s low key, humble, and freely gives up the spotlight, will almost always get left behind. Remember how Donald Trump described Jeb Bush, he called him “a low intensity guy.” How did Jeb do? Even with that last name and having a brother and father who were president. Jeb had all the tools, but he didn’t have the attitude. Dorian, like Trump, was a force to be reckoned with. Additionally, he wasn’t from Miami, L.A., or Des Moines, IA. Yates hailed from Great Britain and if he could make such a buzz for himself in the UK, then come to the U.S. almost win the 3rd biggest title in the sport, and then get runner-up at the Mr. Olympia, then you knew you were dealing a very special bodybuilder.

There’s a good and bad to the digital age. On the one hand, people today have come to expect immediate results. There’s a variety of outlets and tons of high resolution photos circulating the net, sometimes within hours from the end of a contest. Some outlets release content as the show is taking place. In this situation, each and every athlete feels the love and fans get to see content, scrutinize every physique they choose to. The great thing about our current situation, is that we know exactly what each athlete brings to the table. Every single angle is photographed. We have videos galore. There’s an over-abundance of coverage. In yesteryear, however, there was only so much and people had to wait. There’s video, but it’s lower quality, and nowhere near as accessible – even with Youtube. Unless you lived it, unless you were up close and saw these larger than life legends in person, it’s more than possible to overlook their greatness. I wasn’t there, but I’ve interviewed enough people who were, who actually stood next to him on stage, to get a better idea.

Haney was absolutely unstoppable. His back was leagues ahead of its time. His approach to training was also unlike anything seen today. It was methodical, pragmatic, and sensible. These aren’t adjectives typically used to describe being hardcore, but who cares about hardcore, when you’re the best? The only man to ever beat Haney, was 1983 Mr. Olympia Samir Bannout. Much like when Arnold beat Zane a hundred years ago, Haney was still coming up the ranks, taking 3rd to the Lion of Lebanon. Once Haney was on, no one was going to stop him, and I don’t think Yates would have in ‘92 or ‘93. What we more than likely would have had, was another solid rivalry, as seen between Coleman & Cutler or Heath and Rhoden. Eventually Yates would’ve won, but the idea that after one, single encounter, than Yates was so good he basically ran Haney out of town, seems unlikely, but this was just one year before Yates’ own six year run. The epic showdown continues to create for wonderful discussions online, from message boards, polls, all the way to industry podcasts and video shows.

This article alone will draw a ton of feedback, because the very showdown represents the same battle of aesthetics vs freak factor that rages on today. What some might not realize though, is that in the 80’s Haney pushed a freak card of his own, but he was always able to do it – all the while – while having a tiny waist and hitting the vacuum pose. There’s a clear divide from the era up to Samir and the one which started in 1984 with Haney. In fact, there would never again be a Mr. O (Open) under 200lbs. Similarly so, when Yates started his reign, things like the vacuum pose would basically go into museums, as mass monsters couldn’t hit that pose on their best day. Nonetheless, the 90’s represented one of the most exciting, most competitive eras the sport had ever seen. It also had its fair share of aesthetically-pleasing bodybuilders (e.g. Shawn Ray, Kevin Levrone, Flex Wheeler to name a few). That having been said, I’d never be forgiven if I didn’t give my take on how I think ‘92 would have gone down.

There’s a camp that says Yates overdieted in ‘91 and that his ‘92 look would have been too much for Haney. Again, I’m not totally sure I’d agree. There’s no way Yates would have beat Haney in any pose where biceps, midsection, or waist were involved. I’d give Haney the Ab/Thigh, Front Double, and Rear Double. I’d also be inclined to giving Haney the Side Chest. Yates had insane tri’s so he’d get the Side Tricep and I’d probably give him the edge on the Rear Latspread, as well. I’d also lean towards giving Yates the Front Latspread. At the time, there was no Most Muscular, though that’d be a very interesting pose to judge between the two. Given the 7 poses that would have been used in 1992, I’d give Haney the win, but ultimately the contest would be decided on the Side Chest for me, as that would be the one spot where I could flip. Aside from poses, I would almost always give the posing round to Haney. Even at the height of his reign, Yates wouldn’t have out-posed Haney, and the posing round was most definitely scored, and very important.

To answer the question, no, I don’t think Haney retired because of Yates, and I also don’t know that had Haney returned in 1992, that it would’ve been a guaranteed win for Yates.

More importantly, what do YOU have to say on the matter? I hope you enjoyed my article for Iron Magazine. I look forward to reading your comments, whether here or wherever you may see this article.