Who Cares About Legs? 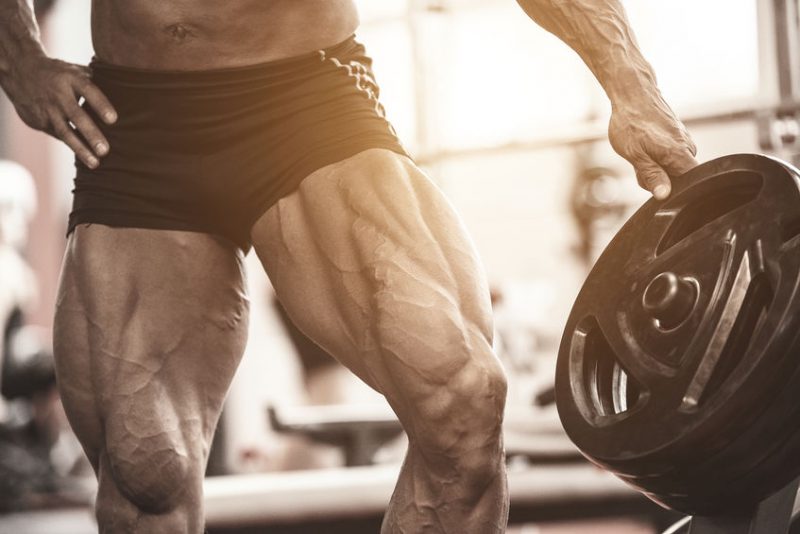 Weight-training is oftentimes about getting in shape, building muscle, and creating a great physique. Diet and supplements help along this process. Rest and hydration are also key. Now that we’ve stipulated all these points, we need to cut through the red tape and talk about the pecking order (pun intended). All muscle helps to create a physique, just like all instruments in a band, fuse together to create a sound. Muscles, like instruments in a band, have different degrees of popularity. For example, most people are obsessed with arms and pecs, you could say these are the lead guitarists and lead singers in a band. Some like delts and big backs for the V-taper look – these could easily be the drummers.

Sadly, no one cares about legs; no one ever asks an athlete to roll up his/her pants (or take them off) to show quad development in mainstream settings. Legs are to bodybuilding what the bass player or rhythm guitarist are to a band. Glutes on a guy (being looked at by a woman) amount to the popularity of a keytar player in a death metal band. Basically, legs are for the birds (no English pun intended); few care, particularly the opposite sex. This is why fewer and fewer guys get in the squat rack, fewer do hacks, and the few who do train legs, try to milk the leg press for all it’s worth. No one wants to admit it, but a lot people do in fact lift, for social acceptance. They want to be popular, they want to be desired, but perhaps most of all, they want to be respected. Big legs don’t get you respect outside the fitness industry. In this article I’ll discuss marketing, supply and demand, and the future of legs training as we know it.

I love social media and the power it has. Marketing is extremely challenging, but rewarding. A lot of people like to vilify ad campaigns and those who create them, but very seldom (if ever) does anyone tell the people what they want. Good advertising takes into account what the people want and then tries to bridge the gap between that and whatever is being promoted. The mainstream’s obsession with chest and arms is nothing new and ad and sales departments will always look for the type of model that will sell products. Take Steve Cook, for example. He’s one of the most photographed male fitness models in the history of fitness and men’s physique. Has anyone ever seen his legs, have ads ever focused on his quads? No. Everything revolves around his looks, his arms, and his chest. That’s what sells and that’s all that counts. The fact Steve hasn’t competed in forever and the fact he’s not even (truthfully) the top competitor in his division, that doesn’t really matter. He’s hands down, a top tier guy IFBB Pro League Pro, but what gets hims all the work – is the fact his physique is what people are interested in.

Placings are key, but as I always tell people, they’re not going to make you or break you in terms of work. If your goal is to be a sought after fitness model, then big legs are actually going to hinder you, more than help you. You can’t have big legs and have a men’s physique type top torso – and even if you could, that’s not going to be a marketable look for you. Big doesn’t always translate to sales in the mainstream. If Kai Greene took his shirt off in an ad for something on network tv, it would more than likely, hurt the product. I know that sounds like about garbage to us, but that’s how brainwashed the brainwashed is. They want what’s attainable, maybe a little bit more, but not much more. Even bikini competitors (on the softer side) are being called too muscular. We live in a society where it’s either obese or skinny, not much anything else. You’re either dying of gluttony or your body is shutting down because of starvation. Someone like Steve Cook breaks through those barriers, without pulling the freak card.

Supply and demand rules. It also dictates what bodies a lot of people want. For example, we all know that the rumor that too much cardio makes legs smaller. Since no one cares about legs, it might be a big reason why treadmills, stairmasters, and even stationary bikes are always in use. If people cared about having tree trunk legs, then cardio machines would essentially be collecting dust. We also know that nothing builds legs more than squats, yet most most squat racks have littered dumbbells all over around them and people get in there to do bicep curls. No one is squatting anymore. Guys who want to attract women are on the biceps and chest program. Triceps, even (which account for 2/3’s of the arm), take a backseat to bicep peaks. How many women will be as impressed by a side triceps pose as they’d be by a front double? Is it sexist, demeaning, or insensitive to point out these realities? NO, they represent REALITY.

If you had a $100k to blow on a car, would you want the high performance car that looked like a hotrod or the the one that was more complete but lacked the aerodynamic shape, contours, color and vertical doors? What’s the point of having a fast car if it’s not flashy? A complete physique is better, of course, but some people aren’t going to work at improving body parts no one cares to look at. The idea that people train for themselves and don’t care about what the world around them thinks, is (usually) pure crap. Nothing could be further from the truth, and the people preaching that noise are probably the ones most fixated on what people think about them, anyways.

The future of leg training is in doubt. You can also tell this reality based on machines gym are putting in their gyms – or lack there of. A leg press costs a lot of money, particularly to have enough 45’s to fill it to capacity. Many gym don’t even offer that device, others don’t have hack squat machines, and some don’t even have squat racks. They might have 4-6 flat benches, but nothing for legs. They may also opt against incline benches – that exercise is too hard – and most people don’t do it, b/c no one asks how much do you incline bench? Again – it’s supply and demand – and incline and decline play second fiddle to flat. Flat’s more popular, so gyms answer that demand, just like marketing does by focusing on chest and arms.

Reality is what it is. What’s your take? I’m certainly not advocating not training legs, but if attention’s what you’re after, having tear drops, ripped hams, and even donkey calves, simply aren’t going to get the phone numbers and dates you have your hearts set on. They also won’t get you fitness modeling gigs or be a deciding factor in whether or not you get cast for a commercial, movie, or (most) ad campaigns.

I hope you enjoyed this article, here at Iron Magazine. Please leave comments here or wherever you may see this piece. Thanks you for reading.