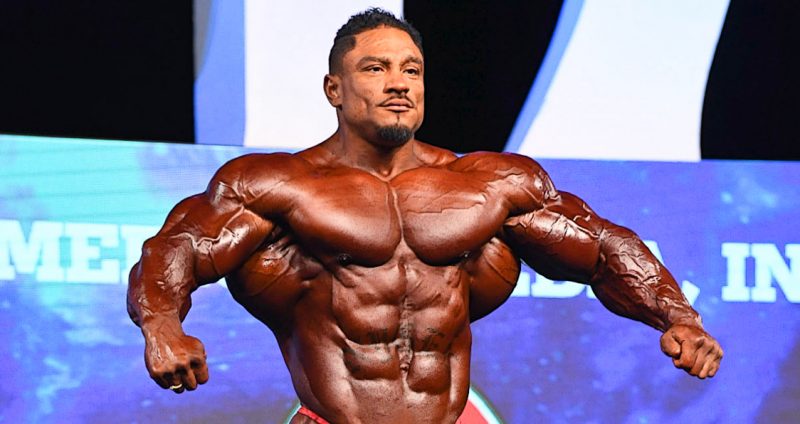 This is a very interesting topic as a couple of years ago I would have told you absolutely. However, as time goes by, I see his window of opportunity getting smaller and smaller for Roelly Winklaar. This year is a perfect example. With a weak showing of competitors (Phil was out, Ramy was out, Shawn was out), it was truly Roelly’s time to shine and take advantage of the moment and he fell way short. So short, that he almost fell outside of the top 5.

And with no disrespect to Dexter, Roelly Winklaar got beat by a 49-year-old vampire who wanted to taste blood more than Roelly. Heck, I’m not even sure he deserved to be in the top 5 at all. If it weren’t for Steve being off a little and holding some water, Roelly could have been bumped out.

At least that’s what she said. 😉 But in all seriousness, Roelly needs to go back to the drawing board. Brandon Curry trains out of Kuwait and Oxygen Gym and has made some amazing progress over the last 24 months. I can’t say the same for Roelly. What is he doing differently? Everyone who goes there sees drastic improvements but other than putting on size, Kuwait doesn’t seem to be really helping him. He comes into the Friday night pre-judging at the 2019 Mr. Olympia holding a film of water and while he tightened up a little for the Saturday night show, the package he brings just isn’t going to cut it. Too little too late. Everyone understands and sees the wow factor of how big Roelly Winklaar is but the bottom line is that no one cares anymore because he never comes into the Mr. Olympia show in shape. Now, I’m going to put this out there as many of you may be thinking “Matt’s just hyper-negative of Roelly.” No, I’m truly not, in fact, I WANT him to be Mr. Olympia. I think he has a good personality and he loves his fans. You don’t see him talking trash, he simply puts his head down and goes to work — which is part of the problem. Heck, he took home the people’s champ award last year. Everyone wants to see the best from Roelly but it’s as if he can’t get out of his own way and that getting smaller isn’t something he’s willing to do in order to come into the show diced.

With him not actively talking trash or creating drama, he should be able to fly under the radar and get the job done to come into the Mr. Olympia and steal the title from just about anyone on the stage. But that has yet to happen. We never know what Roelly Winklaar is going to show up each year. He has the opportunity to have a productive off-season and being that he doesn’t need to qualify for the Olympia should allow him to utilize a longer prep to really make the changes necessary to come into the show tight with crazy definition and separation.

It is my opinion that Roelly tries to come in as the biggest freak each show. And while that does have some advantage, the show is really won off of conditioning these days — something Roelly is inconsistent with. In order for Roelly Winklaar to win the Mr. Olympia contest, he needs to downsize. Now, I understand that’s his signature. Being the biggest freak on the stage draws eyeballs to your physique. However, when you don’t bring the conditioning, all of those eyeballs can see you’re holding water and aren’t exactly lean enough to be a contender.

Will New Competitors Block His Chances?

Look at Hadi Choopan. The guy is a beast for his size. Had he walked into the 212 looking that crisp he would have won. I believe that had he entered the 212 and had Flex Lewis also competed that he could have actually dethroned Flex. But I feel he and Hany Rambod made the right decision to put him in the open with the rest of the big boys. And surprisingly, Hadi held his own and I personally thought he had a good chance of winning the whole thing which I was speaking with Hany about on Saturday morning of the show. Overall, Hadi had a bigger payday being in the open division.

Is Conditioning the Only Thing Holding Roelly Back?

The simple answer is, YES. He’s already MUCH bigger than the other competitors but his lack of muscle separation and feathering is apparent. Now, he did improve his midsection which I was very critical several years ago, so I must give him props for that. The next step is etching out the detail of his physique. If Roelly could nail his conditioning I would put him up against anyone and it would be lights out (including Phil and Shawn).

Listen, I don’t have a crystal ball and I can’t predict the future. What I can predict is that if Roelly Winklaar doesn’t change something soon, he’s never going to raise the Sandow trophy up in the air and be the last man standing on that Olympia stage. And that… would be a shame.