Is Phil Heath the Next Kai Greene? 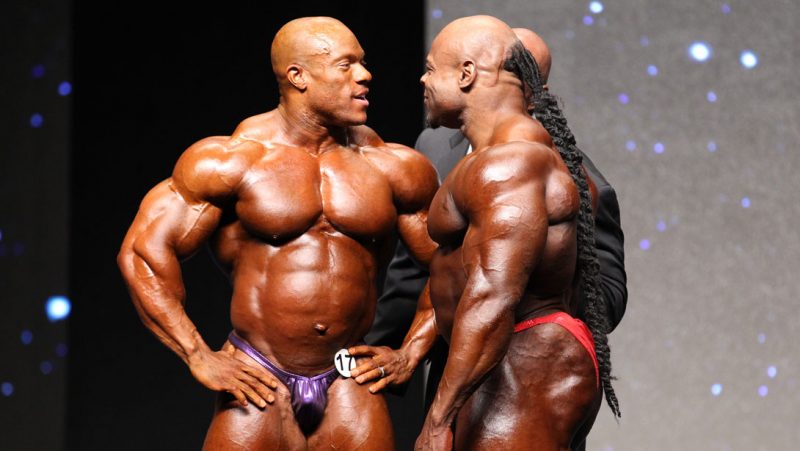 Yeah… you read that title right. Here’s the problem I have with Phil Heath. Ok, I have many, but the main one as of late, has been the vagueness in his comments. Is he doing the Olympia or is he not? What’s up with all the dodgy answers? The Olympia is the biggest contest in bodybuilding. The defending champion remains banned. Kai has not received a special invite. Big Ramy is not doing the contest. At a time when the event could really use a major feather in its cap, Phil is playing Kai Greene.

Do you remember those old Olympia press conference videos whenever they’d ask Kai a question? He’d take forever and ever and ever, spouting all kinds of mumbo jumbo, to ultimately not give a definitive answer. Not only did that make Kai the butt of many jokes, but whoever told him that crap was profound, thought-provoking, or eccentric, sailed him down the river, because all it made him sound like, was foolish. Now, 7x Mr. Olympia Phil Heath is engaging in the same elusive, vague, hot air hype.

Phil was not a popular Mr. Olympia. To most he was considered arrogant. He blocked everyone who criticized him. He blocked me for supporting Shawn “Flexatron” Rhoden too loudly. I even followed up with him on Twitter, thinking we were cool, but I remained blocked, and he’s ignored me to my face. Mind you, I’ve met him many times before and we were good then, but since I became a loud Rhoden fan, I was done. I don’t dislike Phil as a person, I just grew tired of his antics.

If Phil does want to do the contest, he should just say so. I also disagree with some of my peers, in that Phil will NEVER be considered an underdog, even after last year’s loss. People still see him as a champion that was full of himself and while he’s tried toning that down, it’s still there. He also did that cheesy interview with Patrick Bet-David, which I guess was also part of his PR makeover. I thought the interview was comical. As much as he tried, Phil is Phil, he’s the guy who upon winning his last year, nearly walked into traffic berating Luimarco. Now granted, Lui is an _____, but he’s a media personality. What Mr. Olympia wins the biggest show in the world and the only thing he can think as he walks off, with his sheepish entourage following behind, is to talk shit into a cell phone at a Youtuber. Also, who can forget Phil whining on and on because Kai signed as Mr. O another year – demanding that Greene recognize his alleged wrongdoing. Look, it’s all the same to me. Whether it’s Brandon, Dexter, or Shawn who beat Phil, that’s great, but I certainly won’t be rooting for The Gift. I wish him well, but I’m not going to be a hypocrite. The sport has moved on.

Could he still win? Of course, but even asking/answering that question means to fall for the trap. Why even bother? Do we know any more now, than 3 months ago, 6 months ago, or even the day after last year’s Olympia? No, we sure don’t, so why not just get over it already.

Reposting suggestive posts, using memes, dodging questions and/or waving off questions – is WEAK. Do we want someone who half-heartedly wants to be the best bodybuilder in the world – or – do we want a Brandon Curry or Shawn Rhoden busting their butts in the gym, being ambassadors, and keeping their eyes on the prize? Look at Dexter Jackson!! Every Mr. O is AUTOMATICALLY QUALIFIED, but he still went out there and held off a super impressive Luke Sandoe and WON HIS WAY INTO THE 2019 OLYMPIA!! Now compare those guys to a guy who can’t even tell us whether or not he’s going to compete, less than SIX WEEKS from the contest. Wtf is so cool about that? It’s weak – totally and undisputedly – WEAK!

Also, Phil wasn’t edged out last year. He was annihilated. Shawn did to Phil what the U.S. did to Panama in 1989.

And if you think Brandon Curry, who’s looking like a FREAK, Shawn Rhoden who continues to train full blast with the HOPE he’ll be able to compete, and Dexter Jackson lookin like the Dexter of old again, are just going to fall back for this 7x winner to reclaim what they’ve been fighting for their whole careers, you’re nuts! Right now, there is no defending champion, no “knock out the champion to win” game plan. If Shawn can’t compete, THE TITLE IS VACANT; PHIL DOESN’T WANT ANY PART OF THAT, trust me! It’ll be AN ALL OUT WAR for the title and he’s just not hungry enough. The guy can’t even decide if he’s going to compete!!

There’s two ways to look at everything – I’ll give you that. You could look at it as Phil has beat everyone who will be fighting for the Sandow in less than 6ks, BUT, he beat them once upon a time, that doesn’t mean he’ll beat them NOW. Keep that in mind. The Brandon Curry Phil beat years ago, is not the Brandon Curry who won the 2019 Arnold Classic and is not the Brandon Curry the entire world has dubbed the #1 contender to the title. His physique is INSANE, but Physique aside, Brandon has a fire in his heart that he has never had before. You don’t just get in the way of that. Some guy who can’t decide if he wants to compete and who’s reposting Nick Strength and Power’s posts for hits will take the stage and not know what hit him!!

If Phil concretely announces he’ll compete, then maybe I’ll soften up on him a bit. I DID like him up until 2016. We had no issues. I wrote favorable articles about him, I even have photos with him. I first met Phil in Michigan in 2007 after he won the Ironman. I was a Phil Heath fan, but he’s rubbed a lot of people the wrong way. I find this latest phase of ambiguity, particularly annoying – can’tcha tell? I don’t think I’m alone in that, either, I just write articles and do videos, so maybe my voice is a tad bit louder.

What’s YOUR take? Will he compete? Do you care?