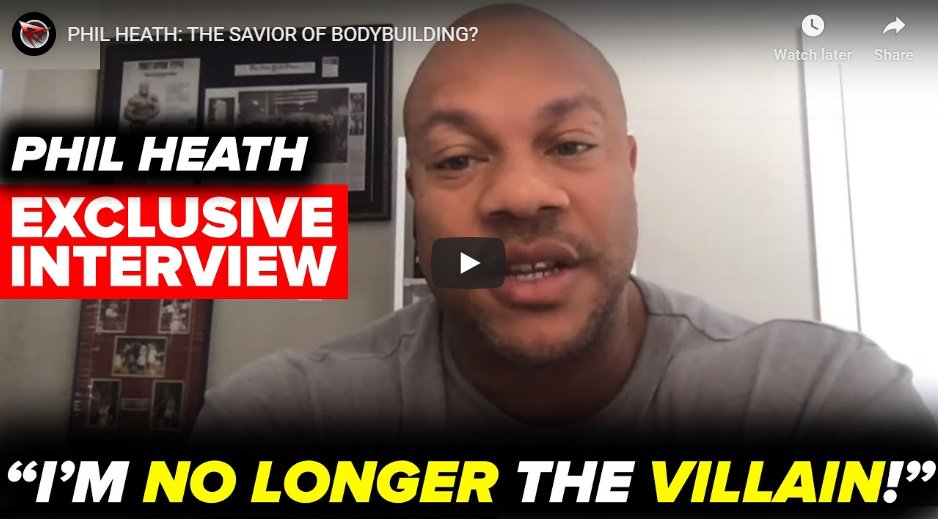 Phil Heath may not think he’s a villain, but if the shoe fits… When this video came out last week, it really bothered me. I get that Dave Palumbo wants to put out tabloid-type content, break all the rules, and try to get as many hits as possible, but this video is really too much. The title alone, Is Phil Heath the Savior of Bodybuilding, is an insult to the entire sport of bodybuilding.

This interview was also a huge insult to reigning Mr. Olympia Brandon Curry and not so much by Palumbo, but by former Mr. Olympia Phil Heath. Phil hasn’t changed, despite his many attempts at PR makeovers; he remains as pompous and narcissistic, as ever.

Further, this video was also a huge insult to 2018 Mr. Olympia Shawn Rhoden and not so much by Heath, but by Dave Palumbo, who for the second time, strongly implied Rhoden’s guilt in the pending criminal case. On a recent video, aimed at exposing Bob Cicherillo, Palumbo made light of Rhoden’s two polygraph examinations, saying any seasoned bodybuilder could take drugs to beat the test. On this video, Palumbo stated that Rhoden got himself in trouble. This is the second time Palumbo, who works closely with Rhoden’s coach Chris Aceto, has put his beliefs that Rhoden is guilty, on record.

The truth of the matter is, bodybuilding is going strong, and the current crop of champions have incredible camaraderie and good sportsmanship. Shawn, Brandon, Dexter, Roelly and WIlliam all have a great relationship with one and other. These guys are all top champions and they all support each other. Phil is the odd man out. Shawn has NEVER undermined the victory and/or reign of Brandon Curry. William Bonac went on record to defend Brandon’s Arnold Classic win, earlier this year. Also, all these guys look up to Dexter Jackson, who in turn has guided these young guns in the right direction. An example of this, is that all of the top guys believe in Roelly and believe he’s going to be back, in top form, in no time. When one champion hits a road block, they all rally for that guy to get back on track. They don’t tear the guy down, like others do…

Phil was not a well-liked Mr. Olympia; you won’t see the fans circulating petitions for him to come back anytime soon. No one cares about his cookie-cutter supplement line, either. No one talks about Phil. Sadly, many of us are subscribed to RxMuscle and we have to see these titles, from time to time. I’ll admit it, I like Rx and I like a lot of Dave’s work, but the work I don’t like, sometimes makes my blood boil. And maybe that’s the point. Any reaction, is a good reaction, right? Well, I’ll leave that one for you to decide.

The truth is, Phil Heath is not Kai Greene. If Kai so much as says the word “Olympia,” the world of bodybuilding comes to a dead halt. Kai was always far more popular than Phil – it was never even close. Shawn and Brandon have gained substantial fan bases, largely, as a result of putting the fans on pedestals. They love the people who buy the tickets to shows, who buy the supplements, and who support the sport. Both Brandon and Shawn have given me interviews for StrengthAddicts.com & they have done so because they see how much I love the sport. I don’t care if you’re a champion bodybuilder, a rockstar, or a movie star, if you treat your fans like gold, they will be with you, forever.

Bodybuilding is also a sport that’s all about attaining damn near perfection. You have to really get into the zone, really believe in yourself, and not be phased by anyone or anything. It’s very easy to become a narcissist and humility becomes a highly, rare commodity. Ronnie Coleman was amazing to his fans, but in no way, shape, or form, humble. Yes, he dropped to his knees and prayed, yes he loved the fans, but humble, he was not. Brandon and Shawn are humble and the fans love them for it. Look at Dexter Jackson, he doesn’t ever say he’s going to go in there and win. It’s always about being the best he can be, having fun, and doing well. The fans adore The Blade.

That being said, I’m all for a little trash talk, here or there, leading up to the contest, but we’re in late November. The next Olympia is nine months away!! To trash talk the reigning Mr. Olympia now, is far more personal. Also, the title of the video is beyond stupid. When I showed it to a multi-Olympia champion, he laughed and was convinced Phil paid Palumbo for the wording. It’s patently absurd that one of the least popular, most disliked Mr. Olympias of all time, would somehow be the savior of the sport.

If Phil wants to advertise on RX, at some point, there’s far less ridiculous ways of doing so. When I looked at that title, over Phil’s mug, the first word that came to my mind was “buffoon.” Surely, that’s not the kind of marketing Phil’s after.

Also, for as much as he may say “no disrespect” to the athletes or that in his absence the current competitors “don’t have a rabbit to chase,” it speaks volumes about Phil Heath’s true mindset.

Lastly, Phil Heath is no one to guide the top crop of athletes, either. That’s what we have Dexter Jackson for, and Phil, you’re no Dexter Jackson.

I hope you enjoyed reading this article, here at Iron Magazine. I look forward to reading your comments. Please don’t forget to use discount code IML15 to Save 15% Off at IronMagLabs.com – including the new CBD Gummies!!!