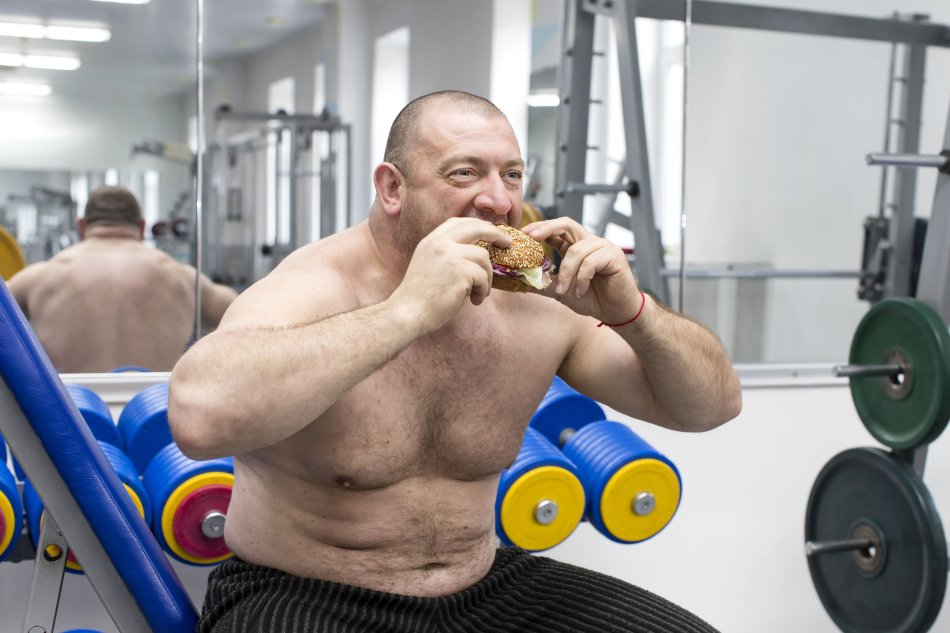 Here’s what you need to know…

The rules of off-season bulking used to be simple: Eat every two to three hours and eat until full. While “clean” foods like chicken and brown rice were the ideal, no one was docked points for sneaking in a pizza during the post-workout “window of opportunity.”

As long as the number on the scale was growing, that was all that mattered. Scale weight became the metric by which you judged the success of a bulk.

It usually wasn’t a pretty process. Let’s say you decided to bulk up to 250 pounds by Christmas. Pants getting tight at 235? Get stretchier pants. Can’t fit into your suits at 240? Make every day casual Friday!

The idea was to just keep eating. When the scale says 250 pounds, you win.

But did you really win? You gained 30 to 50 pounds in four or five months. You might have a bigger bench and squat. You might also have chipmunk cheeks and a low back that barks even when you do a single rep of tying your shoelaces.

But are you any better after an all out bulk? No. There are seven reasons why:

Building muscle – actual, contractile muscle tissue – is a painstakingly slow process for any lifter past the beginner phase.

For an experienced lifter, a gain of 1-2 pounds a month of pure muscle would be excellent. It adds up to 10 pounds or more in a single off-season. However, only a scant few bodybuilders can gain muscle at such a rate, and 10 pounds is a far cry from the 40 or 50 pounds you slapped on during your bulk.

When you bulk up and body fat levels rise, you can gradually decrease insulin sensitivity, which can impede muscle growth. Insulin is actually a signaling protein for both muscle and fat cells to utilize amino acids and glucose.

Ideally, insulin-sensitive muscle cells will readily absorb glucose and amino acids when insulin “signals” them to open. With increased body fat, though, comes increased levels of insulin, and this can desensitize muscle cells to insulin’s signaling effects.

If you decrease insulin sensitivity, your muscle won’t use glucose and amino acids as efficiently, and since it’s metabolically less expensive to store fat, your body will convert more of the excess calories into body fat.

The more overweight you are, the more you change your physiology to favor fat storage over muscle recovery and growth.

This physiological phenomenon where protein synthesis is inhibited and fat storage is elevated is referred to as anabolic resistance, and it’s the last thing you want as a bodybuilder.

The fatter you get, the more likely it is that any excess nutrients you eat are being stored in your butt and gut – not your quads and biceps. And, the less likely it is that your training is leading to any actual muscle growth.

Of course, there are always outliers. I know guys who can gain 50 pounds in an off-season and just get bigger all around. Exceptions don’t make rules however, and simply because the top guys can “get away” with a bulking strategy doesn’t make it a sound option for the majority of us who are less genetically gifted.

Past a certain body fat point, you’re simply accelerating fat storage. The average bulker will store most of his fat in just one unsightly area, like the belly or love handles.

Not only is this unhealthy (fat around the abdomen is directly correlated with heart disease and hypertension), it can lead to the creation of new fat cells that make it even harder to diet down once bulking ends. This process is called adipogenesis, and it occurs during periods of intense weight gain and caloric surplus.

When someone is doing heavy-duty bulking, the excess calories all get eventually converted to glucose, which is essentially sugar. Glucose gets used by both muscle and fat cells for energy usage and storage.

But when glucose levels are continuously high, and you have more than you need for just your muscles, all that excess glucose will be stored as fat. This is why hard and fast “dirty” bulking rarely leads to large increases in muscle.

Over time, as bulking is repeated, you’re actually fattening up the same parts of your body. This makes for a total bitch of a diet. If it’s already hard to whittle away at that one area, adding even more fat there means you should prepare for 12 weeks of hell.

Even worse, the higher your body fat levels climb, the greater the possibility of it leading to anabolic resistance. Getting that stubborn area down will likely hurt other areas too, and actually make them appear emaciated. Consequently, it can negate any muscle gains.

Ectopic fat storage makes matters worse. Because the body is being flooded with excess calories, glucose, and triglycerides, it’ll begin storing the excess not just in adipose tissue, but in the muscles themselves.

This is called intramuscular triglyceride storage. This contributes to dirty bulkers who get a soft appearance to their muscles.

You’ve likely seen the occasional bodybuilder who got huge in the off-season but somehow lost all his soft gains when he dieted back down. Ectopic fat storage is only partially responsible for that happening.

Getting fat over and over again can make getting leaner more difficult each time.

If you get too fat and then have to kill yourself to diet down, the body will hang onto fat that much harder the next time you diet.

This particular phenomenon is somewhat related to the metabolic damage concept of reducing basal metabolism over and over again to the point where weight loss is nearly impossible and weight gain can be caused by even the slightest of calorie surpluses.

While metabolic damage is often associated with female competitors, male bodybuilders can experience the same effects, but to a very different degree.

This will make it harder for him to lean down for each contest, and each time he bulks up he’ll be less and less likely to put on any new muscle. He might not be experiencing metabolic damage in the classical sense, but metabolically he’s causing a lot of things to go wrong.

7 – You Probably Can’t Get Away With It

What the absolute top guys do is often the result of what they can get away with because of their genetics and drug use. It’s not necessarily a model for everyone else to follow. If you want competitive longevity, consider a more conservative approach.

Bodybuilders have bulked up and cut down for decades. This includes more than a few Mr. Olympia winners. It would be silly to say the approach doesn’t work because it clearly has.

But what you don’t hear about are the thousands of guys who bulked up, got too fat, messed up their insulin sensitivity, and never reached their true potential in either size or conditioning.

Consider also the guys that started out with a bang and looked amazing in one or two shows, but were never able to repeat that level of conditioning or fullness again.

Knowing When to Stop

The decision to bulk or not boils down to knowing your body. You need a calorie surplus to build muscle, and it’s hard to eat just enough to build muscle without some fat gain. But gaining five pounds of fat to gain one pound of muscle is a bad idea.

You’re more likely to lose that pound of muscle because of trying to diet that five pounds of fat off.

There’s no reason for most guys to get above 12% body fat. Personally, I prefer to stay under 10%. It will depend on where you start to lose insulin sensitivity – you’ll know you’re there as pumps will decrease and your muscles will start looking soft. If that happens, take it as a sign to end your bulk.