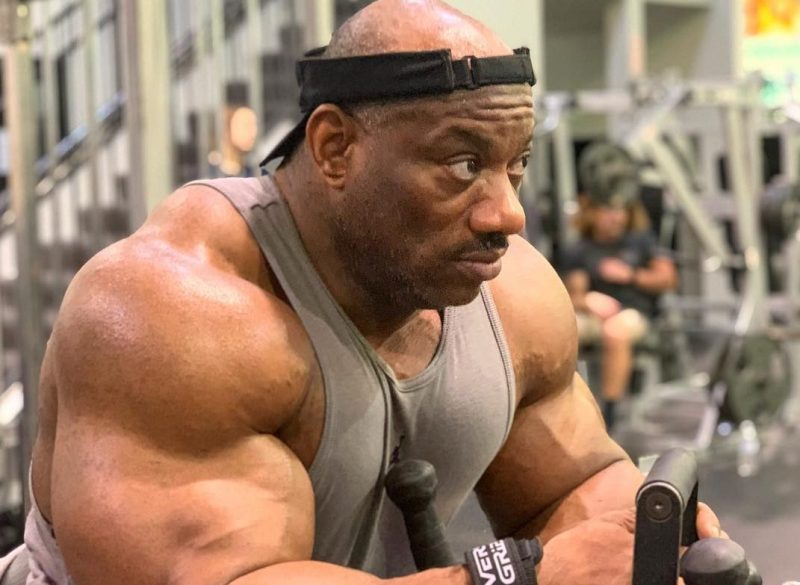 Of course no one wants The Blade to retire – like ever!! He’s the last remaining link between the 1990’s and the current era. He’s a former Mr. O, who after his decisive win at the IFBB Pro League Tampa Pro, is a strong candidate to break into the elite of the elite, the Olympia Top 3. Any man in that ultra-competitive group, could walk away with the Sandow. Dexter doesn’t play the mass game, he’s not a crazy poser, and he doesn’t get carried away with talk – not on the message boards, not at the Olympia press conference, and not on the stage.

His professionalism is as sharp as his physique. The media shows him great respect, the fans are in awe of him, and his contemporaries hold him in the highest of esteem. Dexter has won every title, been featured on all the magazines (in their heyday), featured on countless films – he’s achieved it all. As any great champion, there does come a point in time when retirement is contemplated and should Dex win his second Sandow (his 30th consecutive pro win), I can’t think of a better time and a better way, to retire.

I think a very important distinction to make here, is that retirement shouldn’t be associated with quitting. A lot of people look down on hanging ‘em up in bodybuilding. For many fans, retirement either means you’re sidelined by injury, you’re no longer competitive, or you’ve given up on the sport for something else. Ultimately, no one really retires on top and that very concept is lost upon many, even many diehards. I think a lot of enthusiasts have grown to see their idols as superhuman, as somehow above the aging process, above exhaustion; they see quitting as weak. That reasoning is flawed. What does Dex have left to prove? If he won the O, maybe he could win another Arnold, then retire – but why? When you’ve won every show there is to win, what’s left? Why keep going?

Another argument might be, if he’s still in great shape and he’s still winning and making money, why quit? This is actually a very good point; however, why push his body to the extreme into his 50’s? What is the point? I think if he wants to go on – fine, but for the fans to demand it, it’s selfish. That goes for the press too. Many of the best writers today, don’t want to see Dexter go; in fact, they believe that it’s only fake fans who would go for such a thing. I think it’s a blessing The Blade doesn’t have any injuries and has had such a great run. He may very well go on another 3, 5, or more years, but that should be entirely on him. When he guest-posed at Jack Titone’s St. Louis Pro, the fans roared when he hinted at retiring, no one wanted it. And it’s not like the fans were politely saying no, they were screaming at the top of their lungs!! If and when Dexter does retire, it’ll really be the end of an era. When you stop to think about, he’s been with multiple generations, as a driving force in the sport. That being said, even if Dexter decided to stop competing, it’s not like he’s going to disappear from the scene. Just take one look at Jay Cutler. The guy is more active now, than just about any active competing IFBB Pro. Also, his fanbase, earning potential, and relevance hasn’t skipped a beat!

One last argument, is one I’m really not a fan of, and that is, just to see how long Dex can go on. Wtf is that? We’re talking about a great champion, a legend – but for many, The Blade is pushing the card; he’s staring age right in the face and laughing at it. For many folks who want to see Dexter go on battling into his 50’s, they just want to ultimately see how long he can on top. They want to see if he’ll top Beckles or Vince Taylor. The truth is, and reiterating my first point, Dexter has already long achieved what no other pro champion has. What else does he have to prove?

Now here’s the big question, CAN HE WIN in 2019? YES, HE CAN. There is no man on that stage that Dexter hasn’t defeated before. His size, vascularity, and condition in Tampa, also cement the point that we’re not talking about a nostalgia act. The Blade is sharper than ever, qualified to compete with a win, and arguably was so good that he (perhaps) kept big names like Big Ramy from swooping in for an easy Olympia qualification. At 100%, no one – and I mean no one – is taking Dexter for a ride. At 100%, he can win, and that does not require anyone else being off, injured, or ill. If Jackson can come in, in his signature form, full of spirit, and ready to battle, he’ll emerge victorious in 2019. And if that happens and he wants to retire, I don’t think there’d be any better way or place than there. To win the Sandow, to receive the top honors, and to speak directly to the fans – there and all over the world – is the way to go. Dexter MORE THAN DESERVES to retire HOW HE WANTS TO!!