Was There Hunger in Hungary? 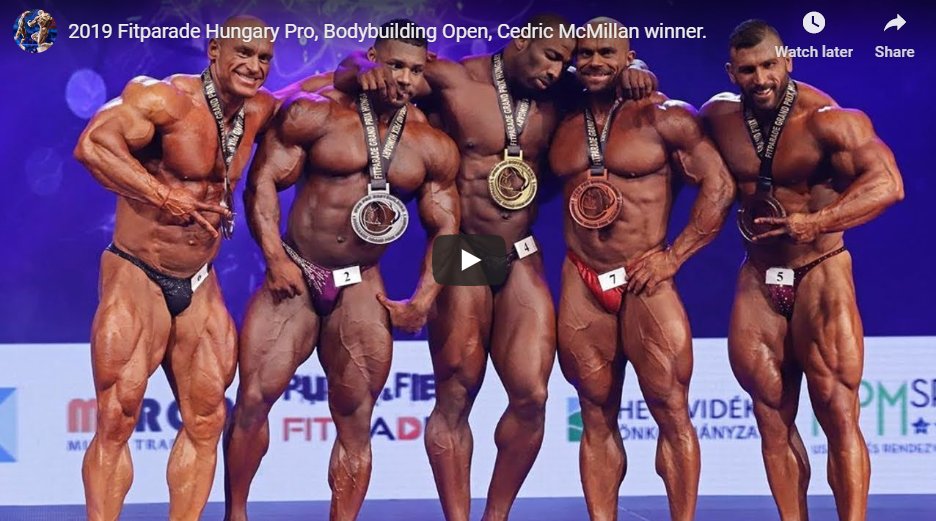 This past week’s IFBB Pro League Hungary Pro brought out some big names in the sport, like Cedric McMillan, Nathan De Asha, and Maxx Charles; however, for a contest where competitors could snag an early qualification for the 2020 Mr. Olympia, I was surprised that many more athletes didn’t show up. When you think about it, 2020 will be a lot like 2019, where the title may change hands again.

Unlike some of my contemporaries in the bodybuilding press, I don’t think Phil Heath will come back. Yes, he’s in great shape. Yes, he’s making guest appearances. Yes, he’s talking like he’ll compete, but so what? How’s Phil’s demeanor any different than that of Kai Greene for the last half decade? That’s a gimmick, it’s hardly evidence of a comeback. Also, what about Shawn Rhoden? Do we know, with any certainty, that he’ll be back next year? And how much longer can Dexter Jackson, conceivably, compete at the top level? What if Roelly can’t turn it around and what if another top guy doesn’t show? Brandon, on the other hand, is a formidable champion, but he’s not invincible. I’m sure Brandon will undoubtedly improve and bring something impressive for 2020, but the dominance factor isn’t there yet. Yet, is such an important word. Although we have a new champion, nothing is cemented, so every top athlete looking to have a shot, should be taking every last opportunity to qualify, but that wasn’t the case last week. Cedric won out of the guys there, the European fans got to see a great bodybuilding show, and now we have one more qualified athlete for the biggest contest in the world next year.

Cedric McMillan is a great champion; I don’t want to take anything away from him. That being said, I know what he’s capable of and I expect a lot from him. For many, myself included, this guy could be a Mr. Olympia, if only he really wanted to. He’s also known to be Arnold’s favorite, at least no other bodybuilder has inspired the same reaction out of The Oak since the year he took Top 3 and the following year, where he’d win the Arnold title. Even the year Cedric won, he only really faced a somewhat on point Dallas McCarver, but he was nowhere near as good as the year he battled with Kai Greene. Just qualify that last statement.

Cedric was able to push Kai Greene, who was at 100%, all the way to the wire. That’s a huge achievement. Very few guys could hang with Kai, much less get him to fight to the extent that McMillan did at that Arnold. That being said, some guys hit their peak but once. I think that year, that show, where Cedric battled Kai, was his absolute best. I haven’t seen that version of McMillan since. Even when you look at the year he won the Arnold, he wasn’t at his best, much like for this win in Budapest. At the end of the day, all that matters is if you’re the best on the given day. If you’re the best among the group you compete against, you win, that’s pretty much the end of the story. That being said, the fans deserve to see top athletes at their best, for every show. It’s a little disheartening when fans don’t get that.

Historically, the European tour was a series of shows after the Olympia, where fans could see the top guys in pretty good shape. There was a very real sense of camaraderie and competitiveness; however, we didn’t see that in Hungary last week. I am glad Nathan was able to compete, after being sidelined from the big show, but the quality in terms of condition just wasn’t there. In fact, some big names from the sport’s past, have even argued that conditioning wasn’t really all that evident at the big show this year, either. It’s just one of those years, it seems, but will the Hungary show set the tone for 2020 as well?

The athletes and contests aside, the fans deserve more. Fans are the ones who make the shows possible. In America, the fans can have their pick of amateur and pro shows. They’re all over the place, as are guest posings, seminars, and festivals. Bodybuilding has always been very strong in The States, but when it comes to overseas, there was always much less access. We’ve seen the sport really change in that regard, with far more contests and appearances. One thing that hasn’t changed is the rockstar feel. When it comes to Europe, the bodybuilders get mobbed. In India, Kai Greene’s first visit looked like the first time The Beatles visited America. He was mobbed, there were billboards everywhere, and throngs of Indian dudes were waiting to give The Predator high-fives, get autographs, and just see a glimpse of one of the world’s greatest bodybuilders. Kai, unlike some of his contemporaries today, is always in great shape. That may be a reason why he’s always been so popular. Kai preps for appearances the way guys should be prepping for their contests, today. When the fans wait all year, save their money to buy tickets, and finally get to see the stars they follow on social media and in the magazines and these guys don’t look like much, that doesn’t do much for the sport. It’s also a little disheartening when the Top 6 in the world are absent. What you end up having is second and third tier guys in less than stellar shape. When you look at it like that, it’s hardly going to get anyone excited.

In the end, the Hungary Pro was a great show, but it certainly left something to be desired. I think anyone who asks for a special invite next year, should be asked why they didn’t do this contest? Quite frankly, I feel that special invites should be done away with. I think if we only had a handful of opportunities to qualify, that’d be one thing, but with the amount of shows and opportunities today, it simply makes no sense to me why top guys should get a chance to bypass the process.

What’s your take? What did you think of the Hungary Pro, the results, and where do you see bodybuilding for 2020?