We’re With You You, Nathan De Asha! 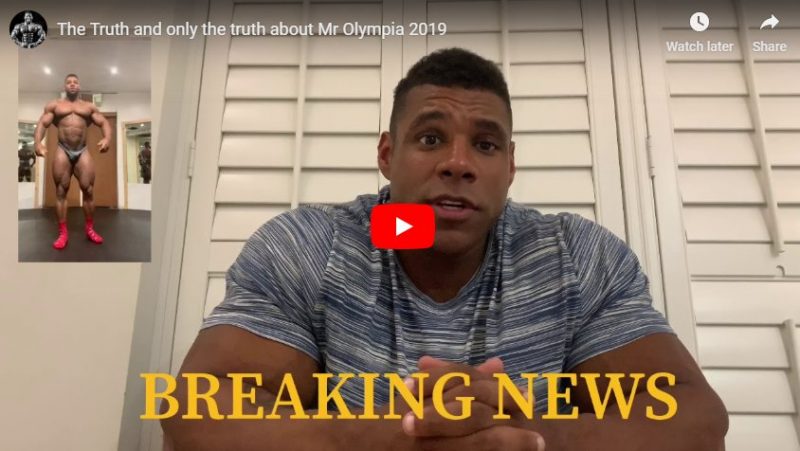 He was ready, sharper than ever, and poised to go all the way. Could he have won the Olympia? He absolutely would’ve been a name to watch!! I think he would have been a serious contender for the Top 6 and when you’re talking about The Superbowl of Bodybuilding, that group of six men, represents a group of guys, who any one of which could conceivably walk away with the Sandow. What separates 2nd from 3rd or 5th from 6th could be microscopic; in fact, sometimes, having heart and the will to win can push you up a placing or two. It’s really that close!! Sadly, Nathan De Asha aka The Prophecy finds himself jammed up with a case in the UK, that will keep him out of the 2019 Mr. Olympia, but he didn’t keep the fans in the dark as to why.

Nathan, who thinks the world of his fans, let the world know why he’d miss the Olympia in a very candid video released on his official YouTube channel. You can tell just how much he wanted to compete, because he was even looking at flights that would get him to the Olympia and back in the UK for trial. The times would have been so close that the chances of De Asha missing court would’ve been very high. I mean think about it, how many times have your flights been delayed? What’s that? The plane needs to be cleaned? That’ll easily add an hour. There’s a storm? Maybe the flight gets delayed 3hrs. What if your bags get misplaced? There’s a million different scenarios that could have thrown a monkey wrench in the itinerary. Sometimes a plane is fifth in line to take off or it lands on time, but has to taxi around for half an hour to find an open gate. These things are very common, so even if you can find the right flight times, it’s a huge gamble to expect everything to move along perfectly. No one can blame Nathan for not wanting to miss a court date, especially one where sentencing would be on the table. As he pointed out, anything even remotely reminiscing absconding could be very detrimental to the final outcome of the proceedings. Nonetheless, the fact he was even trying to travel, shows just how much he cares. Most guys in this situation not only wouldn’t have tried making the trip possible, but most certainly wouldn’t have made a video trying to explain the situation, either. Also, you could hear the sadness in his voice, but you have to respect him for setting the record straight. He even made a point to stress that this was not a visa issue. This type of release is exactly what’s become necessary in the paparazzi-dominated bodybuilding media where rumors and fake news dominate what most fans read.

The last thing I’ll say about Nathan’s video is that he’s also making this very tragic situation into a learning experience not only for himself, but for his many fans around the world. I think a lot of times people can be a little naive in the fitness industry, and this extends to the biggest stars as well. This business is very tough and there’s a lot of hustlers and just downright dishonest people. I don’t want to speak directly to Nathan’s case, because I don’t know all the details, but just from watching his video, it really seems like he was taken advantage of and couldn’t see the big picture at the time.

I also don’t know what the legal system in Britain is like and while I’m very happy that it doesn’t seem like he’ll be doing any jail time, I wouldn’t be surprised if Nathan was prosecuted a little bit more harshly because he’s a big name bodybuilder. This disproportionate treatment wouldn’t just be for physique-based athletes, rather, for any high profile people. It’s sad to say, but we oftentimes think celebrities get treated differently, in that they get more favorable treatment and lighter sentences. That’s certainly one possibility, but there’s also the possibility they get the harsher side of things than say, everyday people. I’m more inclined to believe things are done more so in the latter than the former.

With regard to the federation, the promoters, the press and the fans, it appears everyone has been very understanding, especially given De Asha’s video. I would also hope that his sponsor(s) stay by his side. Just one look at his physique, taken in conjunction with his very impressive contest record, we know that 2019 might have been a truly defining year for De Asha, but hopefully 2020 will be as well. There’s no question he’s a hard worker and no question he’ll be back!

For me, covering my first Olympia, this is definitely a sad moment. I’m seriously bummed out, especially because I’ve interviewed Nathan before, and I think really highly of him. That being said, you live and you learn, and I know we haven’t heard the last of The Prophecy!!