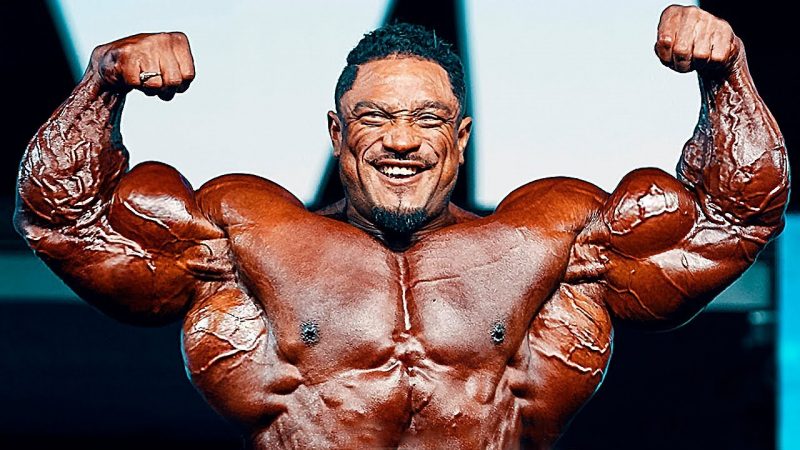 First and foremost, everyone knew my prediction for this year, the defending champion repeating and Curry at runner-up. Although that seems highly unlikely to be the finishing places now and given some additional facts, I may have to revisit my prediction. Now, in the absence of the reigning champ, I’d normally put Curry in the winner’s circle. Understand, that I always said Curry would push the defending champ to the limit and possibly edge him out.

That being said, I’d be remiss if I didn’t at least consider Roelly Winklaar. To be totally honest, he’s a freak, and he’s a freak that’s done very well for himself on the pro stage. Did his outing at the Arnold shake a lot of people’s faith in him? I think that’s undeniable. I still commend him for getting on stage, despite having a stomach virus in Nepal the week prior and having a knee issue (what exactly is the issue, is something few are familiar with). Winklaar got his start with the legendary trainer simply known as “Grandma,” moving from coaches until he found the perfect match, and despite a horrific motorcycle accident some years ago, he’s pushed himself to the point of being one of the best in the world. In fact, when shots and videos of him back at Oxygen Gym in Kuwait surfaced, they sent shockwaves throughout the fitness industry. There are guys who do very well there, guys like Brandon Curry and up until recently Big Ramy. For others, it’s not their cup of tea, but for those who (I feel) can devout themselves entirely and dive into the program, I think many have seen real improvements. In Curry’s case, he’s had a whole new career as a pro. With the recent content in question surfacing and folks on the message boards going crazy over it, it’s most definitely created a lot of buzz; however, many of the biggest names in the bodybuilding press aren’t exactly jumping for joy. Many are dragging their feet and holding off from including Winklaar in their Top 3.

Handicapping contests, particularly the Arnold, and most especially, The Olympia, have become very much accepted litmus tests for real experts in the industry. Everyone wants to have the accuracy of a Lonnie Teper, but few are ever consistently as accurate as he is. None of these talking heads want to go out on a limb. Even though, you’d think predicting last year’s second runner-up to win this year, is hardly a gamble.

Here’s the deal. There’s always been the folks on the message boards who are basically, very easily impressionable. They’re good people, but for the most part, they don’t go to contests, they don’t understand just how keen the eyes of the judges are to the mandatory poses, and they also don’t understand that despite how high the resolution of photos online may be, no matter how lifelike and perfect 4k-8k video may be, it’s not the same as being there in person. I don’t want it to seem like I’m lambasting only those on the boards, because you see the same issues with people looking at shots on social media and especially on social media apps. The worst is when you have a bodybuilder showing off parts of their physique, and worst yet, alone.

There’s no harm in posing for a photo and it’d be super bizarre for top guys just to get together for a progress selfie; however, the point still needs to be made. If you have a Top 6 guy posing for a shot, even before their Olympia prep has started, they’re going to look super impressive. And that’s because, even on their worst day, these guys look 10-30x better than everyone else – that’s why, they’re THE BEST! That being said, what they show is also key. Most guys will show arms, maybe delts, the real daring type might show abs, but very, very few are going to show quads, hamstrings, or even back. They will show you their dominant features and they will usually be alone. Sometimes, lighting and other special effects, like shadows and filters may be employed. Assuming a competitor is on point, I’ve also seen it where they fade by the time they get to the contest or fade among the other top guys. So, while I’m super impressed by the new shots and video of Roelly at Oxygen, I’m still taking it with a much bigger grain of salt than most.

Roelly had a huge outing at last year’s Olympia, with a Top 3 finish, earning the People’s Choice award, and steadily moving up the ranks over the years. Could he be the next Mr. Olympia? Absolutely, but right now he’s been relegated to a second tier by many media outlets. I’m also not sure who is predicting former Arnold champion William “The Conqueror” Bonac to win, either. It seems that most are automatically looking to Brandon Curry (my pick to win) and/or hoping that absent champions like Phil Heath or (the real absent) Kai Greene might reemerge. With Big Ramy also out of the contest, seemingly because of a shoulder issue, but more likely due to sour grapes over a bad placing last year, having left the Camel Crew, and with a leading role in a movie with Mike Tyson, the 2019 Olympia is pretty much wide open. Could a dark horse take it? Could a longshot come out of nowhere? These are all very good questions.

I, do, believe one good thing has come from Roelly’s Arnold debacle, and that’s been the fact he can fly under the radar for this year’s Olympia prep. When I saw him and interviewed at Jim Manion’s NPC Pittsburgh Championships, he looked very big, very hard, but he was also totally covered up. I know he guest posed, but I didn’t see that. He assured me he was in his best shape, injury-free, and ready to go for 2019. If that’s the case, this guy will fight like it’s World War 3 – that you can count on!!

I’m curious, what’s your prediction for the 2019 Olympia with regard to The Dutch Beast, Roelly Winklaar?