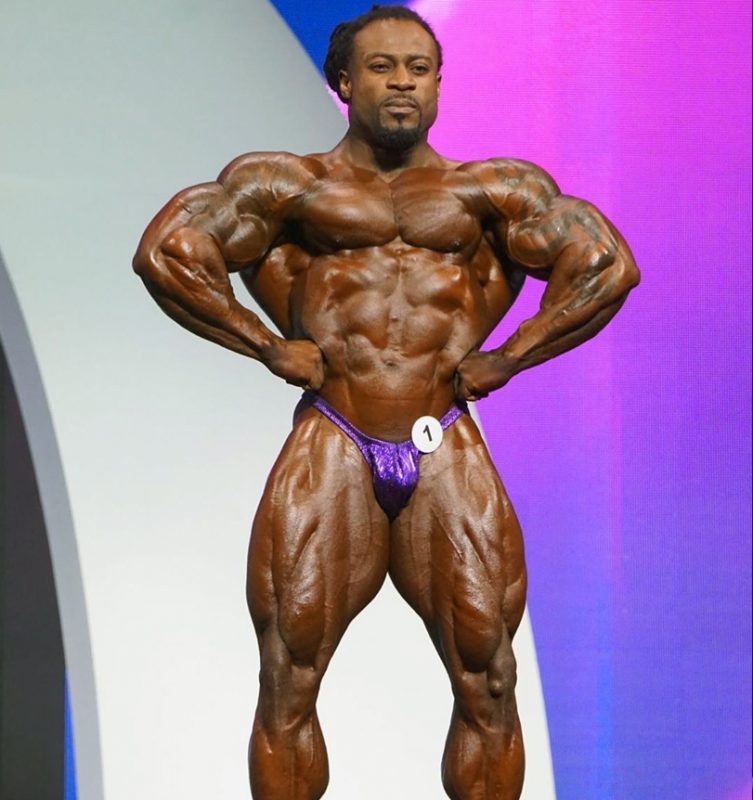 First and foremost, let’s qualify the title statement. Bonac wasn’t “all alone” at the 2019 Mr. Olympia, but that line deals with a bit of taunting by Olympia emcee and Bodybuilding Hall of Famer Shawn Ray, who couldn’t help but asking The Conqueror about his “Instagram Movie.” Bonac was totally caught off guard, much like a deer in headlights, when Ray asked him about the IG piece. He hadn’t a clue, nor did many of the other panelists. To put things into perspective, the press conference this year had been very goodnatured, it went very easy on any controversey, and without saying it was boring, I will say it was very PC.

Shawn had other plans and when he elaborated a bit further, you can see Cedric McMillan calming Bonac down, Brandon Curry laughing, and the audience most defintiely at the edge of their seat. The truth is, Bonac didn’t just break ties with his longtime coach, Neil Hill, it was a very public, very dramatic break. The Conqueror complained of athlete/coach splits that saw him having to fork over as much as 40% of his prize money and basically making the case that his coach wasn’t even as engaged as in the past. The truth is, the break made headlines, with all the big names in the bodybuilding press, from Dave Palumbo all the way to Ron Harris weighing in. Youtube sensation Nick’s Strength & Power, as well as other Youtube notables like Nick Trigili weighed in as well. By the time just a couple of days had passed – absolutely everyone – knew what had happened. So, when Shawn asked about it, then pressed on for a second round, it was very interesting to see Bonac totally deflect the question. He answered on some level, but it wasn’t what Ray wanted.

The truth be told, we often see Top 6 Olymians as being inextricably linked to their coaches. We, as media and fans, believe that coaches and camps are imperative to an athlete’s success on stage. Perhaps it’s the romance of the whole thing, perhaps some of us want to look at bodybuilding like boxing, or better yet, like the Hollywood version of boxing. The movie Rocky resonates with many of us. Maybe of us want to think of a William Bonac like a Rocky Balboa and as Neil Hill as a younger, hipper, Micky. Whatever the case may be, it’s ultimately the bodybuilder who trains, eats, takes supps and dries out. It’s ultimately the athlete who has to be on stage, nail the poses, and battle it out at the posedown. Nonetheless, many of us thought that Bonac would be at a severe disadvantage without Hill. It’s interesting, but I thought the same thing, subconsciously, and when Shawn asked those questions, I couldn’t contain myself. You can probably even hear me on my video. I rarely, if ever, let my emotions be documented in my coverage, but the same way Ray caught Bonac off guard, I think he caught me off guard as well. I know that after the press conference, I had to make a point to tell Shawn that that question was so on point and also so out there, that it truly made the whole press conference memorable. I honestly couldn’t recall a single question, answer, or story from that whole press conference, and it was barely just a week ago. That being said, I can remember Shawn’s question and the awkwardness it created like it happened ten minutes ago. I suspect I’ll be able to remember Shawn’s question next month, next year, really forever. I’m not saying that it was the best question, but man, did it throw a monkey wrench into the whole process!

So was Shawn, right? Well, to be fair, Shawn didn’t say he thought Bonac wouldn’t do well. That’s important. He simply asked, in a lighthearted way, how Bonac felt being at the O without a coach.

So how did Bonac do? What’s very interesting is that Bonac could have won the Olympia. The same guy he battled with, down to the Top 2 earlier this year in Columbus at the Arnold Classic, would be the same guy he’d end up battling it out with, at the Top 2, for the Olympia. The Conqueror took runner-up, his highest placing ever, at the Superbowl of Bodybuilding – and he did it without an allstar coach. He did it without any actual coach. That’s huge!!

Could he have looked better? Absolutely, but he totally disproved the notion that an athlete at that level cannot self-prep. While he wasn’t there alone, and had an entourage there with him, he basically prepped himself. I don’t think anyone said William was robbed or Brandon didn’t deserve to win, but everyone believed Bonac was deserving of the #2 spot and totally, without a doubt, beat Iranian sensation Hadi Choopan. This placing in Las Vegas makes Bonac’s future quite bright, as he could very conceivably win the title in 2020.

I think it’s awesome how things played out, but you gotta wonder what Neil Hill is thinking? You gotta also wonder if other top guys might have a try at prepping themselves – not to mention keeping that huge chunk of their prize earnings!! More importantly, what do YOU think?