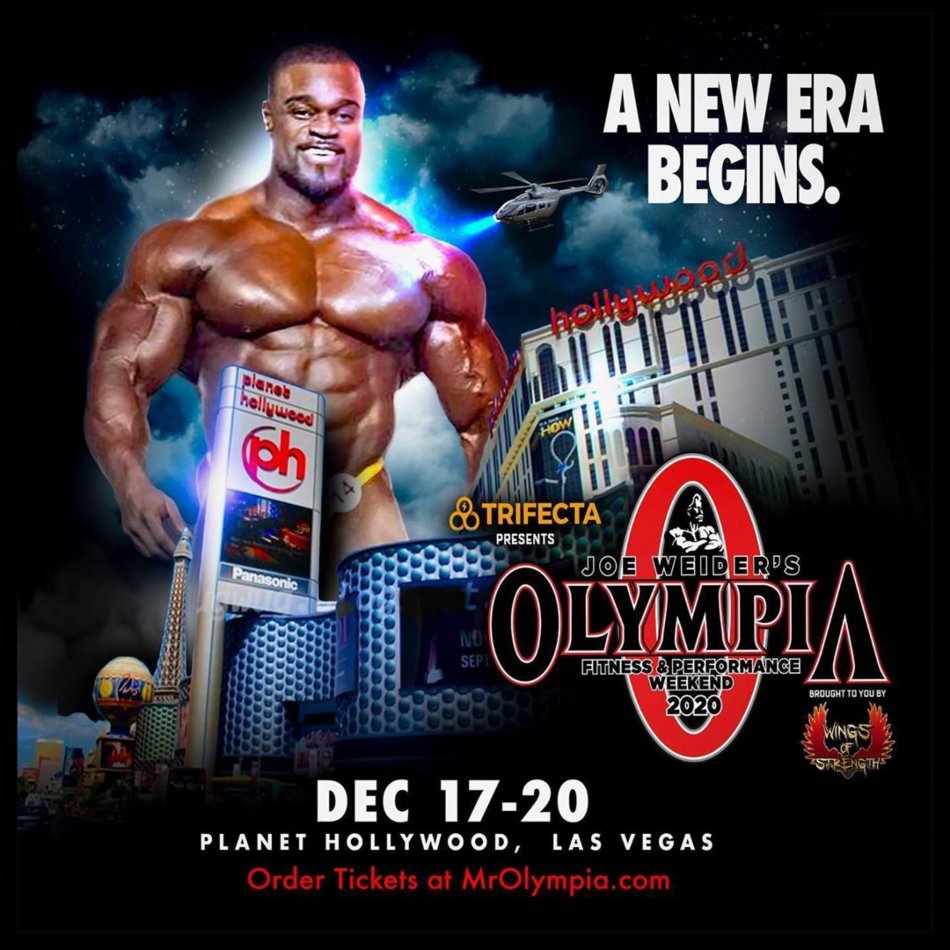 First and foremost, let me just say that the old Spanish saying, “no hay mal que por bien no venga,” (there’s no bad that won’t bring good) rings true. We’ve had a horrible 2020 as a result of the COVID19 pandemic. The coronavirus left gyms closed indefinitely, it resulted in the cancellation of the largest fitness expos in the world (i.e., The Arnold Sports Festival), and it was the direct result of countless contests being either cancelled or postponed. One of the biggest and most hyped contests of all, The Rock’s Athleticon in Atlanta, GA, was postponed to 2021.

With everything that was going on, with people forced to social distance, many being laid off or forced to work from home, the chances The Olympia would happen started looking bleak for many. I always knew the show would go on, especially after I interviewed my good friend, Chief Olympia Officer Dan Solomon. Dan is the type of guy, who if life gives him lemons, he’ll make lemonade. That’s the kind of guy you want at the helm, someone who isn’t going to complain and fold under pressure, but really shine. I was also confident the Olympia Weekend would in fact happen because the contest changed hands. Nothing against David Pecker and AMI, but that’s a huge company, where bodybuilding is just one of many assets. Fitness was also not a key moneymaker for them, either, it was just one of many. When Wings of Strength mogul Jake Wood bought the event, I knew the Olympia would happen. With that said, there’s a big difference between it simply happening – and – it truly being a new era.

There’s a lot of pieces at play here. For starters, when Dan Solomon sold Digital Muscle to Jake, that was the first step in my opinion. DM is unlike any other website in the fitness industry. If I had to compare it to any other, I’d be inclined to say Generation Iron, but that’s not entirely accurate, either. Digital Muscle is a bodybuilding hub and Dan realized his vision by recruiting some of the biggest names from the print era, to collaborate with him, digitally. The page has always put out cutting-edge content without falling prey to a lot of the industry pettiness and squabbles. Solomon has always looked beyond that. He’s not interested in the he-said/she-said because it’s a never-ending war. There are plenty of sites who have hung their hat on gossip, fake news, and fueling the rumor mill. While they get hits and they can sell advertising, at the end of the day, they’re not really building anything. They’re paying the bills, but they’re not growing the sport. Between his role with Digital Muscle and the major motion film, Bigger, Dan put himself on the map. Once Jake bought DM, IFBB Hall of Famer “Sugar” Shawn Ray was put at the helm. Dan moved on, reaching a pinnacle in his career, as Chief Olympia Officer. Less than a year later, Digital Muscle has continued upping its game, and now, Jake owns the biggest bodybuilding contest on Earth.

It’s all about building, making moves, and growing the sport. The new graphics are fire. You can tell that a lot of time was invested – from the conceptualization to the execution. They picked great photos, they worked on the wording, and now these images will create a level of hype that will fuel us for the next six months. To see 7x 212 Olympia Showdown Champion James “Flex” Lewis (aka The Welsh Dragon) on stage against 2019 Mr. Olympia Brandon Curry, that’s got blockbuster written all over it. The fans want to see 2018 People’s Champion Roelly Winklaar back!! They want to see the return of Hadi Choopan.

The thing is, each division has a roster of real superstars, but bodybuilding reigns supreme – as it should! What I love most about the new direction, is the fact that everyone who’s involved loves bodybuilding. This isn ‘t just another way to make a buck and the fans are thought of at every turn.

The fact the new venue is at the heart of the Las Vegas Strip is huge!! The Zappos Theatre is a new, updated, and state of the art venue. The host hotel has been totally renovated, the rooms are beautiful, affordable, and contest-goers have a million things to do, just walking out of the hotel lobby. Nothing against the old venue, but when the Olympia left the Mandalay Bay for The Orleans, I highly doubt that that move was one that was made with the fans or competitors in mind. Nonetheless, the old venue gave the sport some great memories. The fact there’s a new era, doesn’t mean the old wasn’t great, but we sure can use a change, as well.

One other, big plus for the 2020 event is the return of Women’s Bodybuilding and from a recent episode of Digital Muscle, it seems that 10x Ms. Olympia Iris Kyle may be returning. How huge is that?!? Jake Wood is directly responsible for the renaissance of muscular women and women’s bodybuilding through his Wings of Strength empire, but Iris has been the one superstar notably absent from the Rising Phoenix events and the World Championships. The fact there’s any possibility she’d return to the Ms. Olympia stage is unreal. At 150lbs ripped and symmetrical, Kyle would be very hard to beat. In fact, the only woman who ever did beat her, was 2005 Ms. Olympia Yaxeni Oriquen. Yaxeni is also expected to compete. Much like Men’s Bodybuilding, the Women’s Bodybuilding stage will have so many different things going on – from its return, to the showdown between generations, to which ladies will make that Top 6 and posedown for the world!!

212 Bodybuilding is another nail-biter, with a new champion in Kamal El Gargani, the expected return of The Boston Mass, Jose Raymond, the undeniable ascent of The Giant Killer Shaun Clarida, and a whole roster of veteran competitors, giving 110% to win the title than Flex Lewis held for seven consecutive years. You also have the heir apparent from 2019, Derek Lunsford, very much ready to vindicate himself after 2019.