A VALUETAINMENT EXCLUSIVE: DEXTER JACKSON TALKS HIS NEXT MOVES 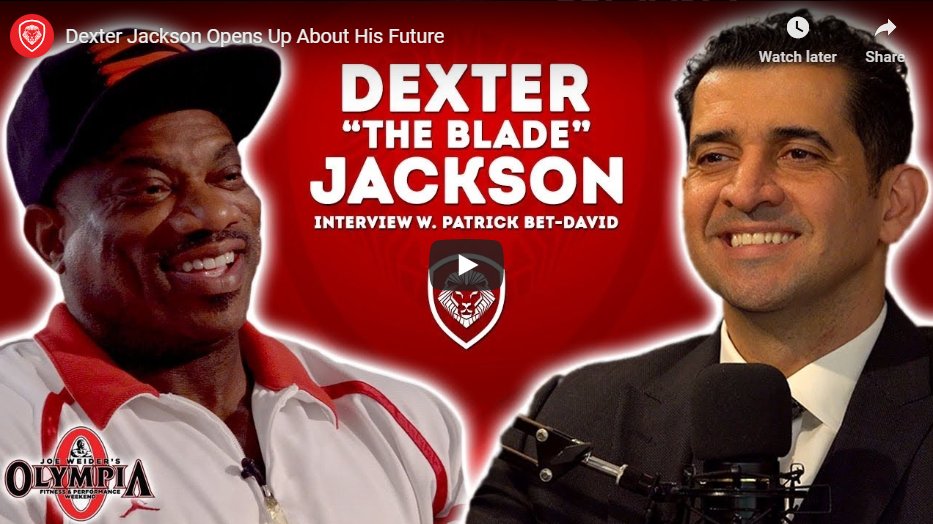 I need to hand it to Patrick Bet-David, he’s putting out some amazing bodybuilding content lately with some really good interviews with top bodybuilders and asking some really deep questions. On the latest installment of Valuetainment, Patrick sat down with Dexter Jackson and spoke about his career, his future, and the reasons behind his retirement from bodybuilding.

It’s Time to Move On

When asked how he knew it was time to move on, Dexter Jackson mentioned that he could probably go on for another 10-15 years if he really wanted to. His body is still holding up, he’s maintained and improved upon his size, and he’s still making the top five in all his competitions. Yet, he mentioned that there needs to be life after the sport of bodybuilding.

Dexter has been going at it for so long that he feels his worth value in the industry may go down if he doesn’t act soon on some business opportunities that have been presented to him. He mentioned that he will be launching his own Dexter Jackson Signature Series line of supplements along with some other business opportunities that he doesn’t want to disclose just yet.

While business is clearly on Dexter’s mind, he mentions that there are some tricks and tips he has that he’ll unveil once he retires. One of these tips he mentions is a gut health product he has been using that is medically prescribed and not over the counter (OTC). It’s claim to fame is not only does it help with gut health and digestion but it can also help shrink the intestines and reduce the “bubble gut” that is seen on bodybuilding stages these days.

Should Dexter Jackson be correct with this medication he is taking for his gut, it could change the landscape of bodybuilding and bring it back to the tight midsections we were used to seeing in the yesteryears. This will enhance the overall physiques of competitors and the aesthetics the sport demands.

Patrick Is Looking Out for the Competitors AND the Sport

I want to throw it out there and say if promotors of the sport want to increase their value and prestige, they may want to consult with Patrick for some ideas. Pat brought up a really good point when discussing the Olympia and what athletes have to show when they win the Mr. Olympia title. Patrick asked Dexter Jackson what you get for winning other than the money. What do you have to show? Dex said a Sandow trophy on the mantel. This wasn’t good enough in the eyes of Patrick.

Patrick brought up the point that when you win the Super Bowl, World Series, or NBA Championship, athletes and coaches are awarded a nice diamond ring. Not just any ring, a huge ring worth well over $10,000. Why does this matter? It matters because it brings attention to not only the athlete but the sport and achievement. You get to walk around proudly wearing the ring and it becomes a conversation starter.

The Olympia should also look to implement this into their show. Let the winner get a nice ring that opens the dialogue of “this ring represents my Olympia win and puts my name with all the past winners and legends in the sport.” In my opinion, it’s a great idea and one that should be considered.

One thing that may surprise some people is how humble Dexter Jackson is. When asked the obligatory question of “who is better” he was very politically correct with his answer. He mentioned that it’s not about comparing body parts but who has the better overall physique and look. He said he doesn’t sit there and sulk over not winning a show and said he respects the decision of the judges and that’s why they are there – to judge what THEY see.

Dexter also mentioned that bodybuilders come to him for advice and he doesn’t hold back being brutally honest with them and that the athletes know his response is coming from a good place and that what he’s seeing and saying is truthful. For instance, he thinks guys like Sergio Oliva Jr., Patrick Moore, and Steve Kuclo have the potential to do some serious damage in the sport and even one day become Mr. Olympia.

And when asked about other competitors in a one-word answer, unlike some of the other bodybuilders who have been interviewed by Patrick Bet-David on his YouTube platform, Dexter had only nice things to say about all of them – including Shawn Ray who was extremely critical of Dexter Jackson in the past.

It’s Time to Focus on Family

Dex has been in the game for a very long time and the sport is incredibly demanding and can take a toll on any type of family life and marriage. Dexter mentioned that his fiancé, Gail, has been extremely supportive and has allowed him to move out to Los Angeles to train under Charles Glass for many years and that it’s time to put her and his family first. I think that’s incredibly honorable of him to say and want to do. As he said, he could probably go another decade in the sport and still make a good living from doing so if he wished.

Dexter Jackson will go down in history as the winningest bodybuilder to ever walk this earth. This achievement is something I don’t ever see any other bodybuilder beating. At the age of 50, Dexter Jackson is doing things guys more than half his age can’t achieve. I tip my hat to Dex and wish him nothing but the best in his retirement. Until then, I hope to see him get the nod and his hand raised a couple more times.