ARNOLD’S RECOVERY – ONE FOR THE RECORD BOOKS! 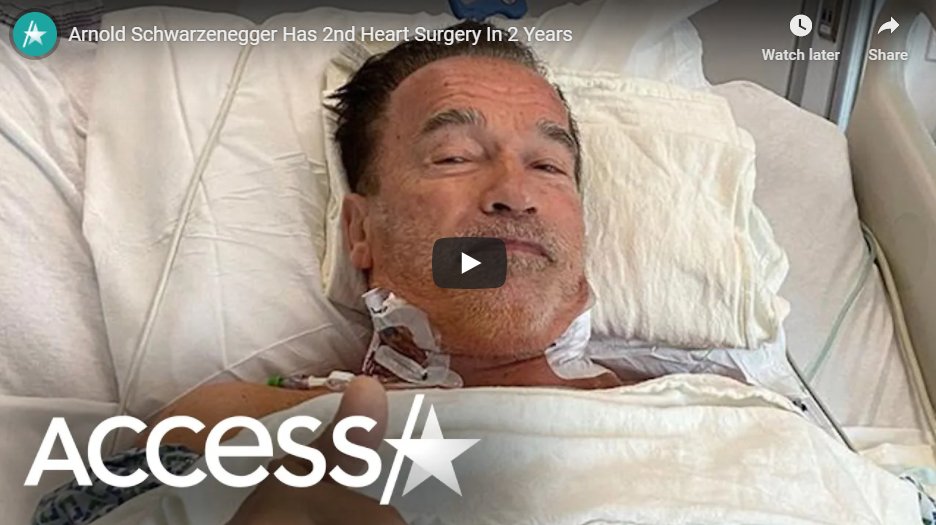 Bodybuilding fans all around the world are extremely happy to hear news that Arnold is making a quick recovery after his second heart valve surgery at the world renowned Cleveland Clinic. Health and well-being have always been very important to the 7x Mr. Olympia, movie star, and elected official. The truth of the matter is that guys from The Golden Era of Bodybuilding have lived long and lasting lives, largely, because they took care of themselves.

We recently lost bodybuilding and wrestling star Ric Drasin and not too long ago, the sport was dealt a massive blow with the loss of 2x Mr. O Franco Columbu. With that being said, both Drasin and Columbu lived well into their seventies and both were in top shape. That says a lot.

We have guys in the bodybuilding world, today, who are having major health issues in their 40’s and even as young as their 30’s. Arnold has always championed the cause of having blood work done, checking blood pressure, and eating right. This is why Arnold was tapped by The White House in the 1980’s to be the face of fitness for the American people. When it comes to being an ambassador of bodybuilding to the world, Arnold has always lived up to the title. Very few fitness celebrities travel as much as he does and/or keep up with as many appearances. What’s crazy is that people half his age, would be hard pressed to have as much energy and heart.

The Oak comes from a different era, from a different country, where he had to work for everything he ever had. Arnold’s work ethic is the same in all roles whether competitor, movie star, or elected official. This was Arnold’s second heart valve surgery and it was a huge success. In the days following the procedure, Arnold was out and about in Cleveland, taking selfies at historic places and taking in the sights. Just this week, he was back home in California, on his bike, exercising!! When it comes to the sport of bodybuilding, no one will ever play the role that Schwarzenegger plays and here’s why.

Bodybuilding fans really run the gamut. Not all the fans keep up with the sport. Some love the look of the bodybuilders, but they don’t necessarily know the difference between the amatuer and pro ranks. They may not know what all goes into getting a pro card or even what goes into a prep. Some know that, but don’t know who the reigning Mr. Olympia is. This information can be accessed so easily by visiting any website on their smartphone, but they just may not have the interest in finding out said stats.

As someone who’s been doing Youtube since 2008, I always read the comments on my videos and try to respond to quite a few. Over the years, I’ve come across notes from people from all over the world, where they just discovered the movie Pumping Iron and here they are 30 or 40 years later, asking who I think should have won – Arnold or Lou. They want to know what Arnold is doing these days, they want to know what movies he plans on doing, or what his diet looks like, today. Mind you, my channel is about bodybuilding, but not about Arnold.

To many fans, there’s simply no difference. Arnold is bodybuilding and everyone else in the sport, is simply just copying him. I don’t know that that’s accurate, but I do think every bodybuilder and physique-based athlete has been inspired by him on some level. No one man has done as much for the sport as Arnold. Even Ben Weider, who founded the IFBB, and Joe Weider, who founded the media behind the sport, pale in comparison to what Arnold has achieved. Further, it makes perfect sense why Joe picked Schwarzenegger to carry the sport forward. Joe was a visionary and saw into the future. What Joe saw, is what we, as fans, see.

As fans, it makes us happy that Arnold is taking care of himself and doing whatever is necessary to be with us for as long as possible. That being said, if there was a way to measure public opinion and the general mood in the sport, it’d be pretty safe to say, that the image of Arnold in a hospital bed, with tubes and IV bags around him, take a toll on the morale of the sport. The Oak could have done cardio at home, but taking a bike ride, was far more about the fans than it was about the exercise. He wanted to be seen, photographed, and videotaped. It’s important that he be seen and heard from, otherwise fans would be all over social media and clickbait “news outlets” in our scene would start speculating. They wouldn’t weigh in with positive commentaries either, they’d all but have The Oak dead and buried, if it meant them getting more hits. Great writers like Peter McGough and Ruth Silverman are few and far between these days. Journalistic integrity in bodybuilding media circles has become a scarce commodity. To the outsider, maybe Arnold just needed some exercise, but there’s far more to it, as far as I’m concerned.

I really hope that Arnold sets an example that today’s competitors follow. There’s so much that goes into being healthy. Whether it’s physiological or psychological, athletes today need to do whatever it takes to lead quality lives. If a competitor looks healthy, but is falling apart emotionally, they should seek medical help for that. If a competitor looks healthy, but is suffering from renal issues, they shouldn’t “toughen it out,” only to succumb to lifelong complications that could have dire consequences, years later.

A lot of the biggest stars in fitness, bank on a feeling of indestructablity that’s so common with youth. People think they can beat their bodies up while they’re young and everything will get sorted out in middle age. That might work for some, but others never make it to find out. The truth is, competitors eat and train in ways that separate them from the mainstream public. They take powerful supplements, sometimes at alarming dosages, and many times indefinitely. Guys in Arnold’s era openly admitted to using AAS for contests, but they weren’t on them year-round. Nowadays, a great many competitors marvel at the concept of post cycle therapy because they simply never come off. Not only don’t they ever come off, but they don’t let up on the dosages, either. Imagine the state of their internal organs. And worst yet, there’s competitors who discover competitive physique-based sports later in life so they’re not just beating up their bodies in the 20-30 age range, but well into their 40’s, 50’s, and beyond.

I’m not here advocating natural bodybuilding or living off wheatgrass, but I am here to say that more athletes should look to Arnold when it comes to prioritizing their own health and well being. The stage will be there when you’re back to 100%. You won’t lose all your muscle if you take a break from the sauce, either. You only get one life (that I’m aware of) so make the best of it. Train with sense, eat with sense, and take care of yourselves. Look at Arnold and everything he’s accomplished. When you think of someone that’s 73 years of age, do they look anything like Arnold? When I think of 73, I don’t think of someone that looks like Schwarzenegger! And his look, his energy levels, and his work ethic can’t be attributed to supplements. It’s a mindset, it’s way of life. His healthy is #1 and so should yours!