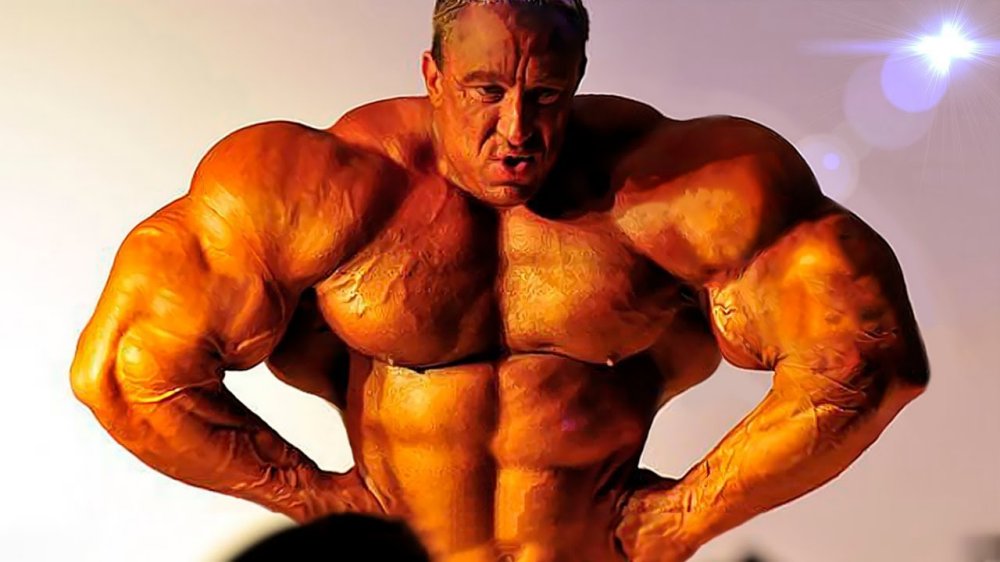 If you loved bodybuilding in the early 2000’s and you loved to pysch yourself out before, during, and after lifting, then chances are you loved Das Freak, the German Beast, Markus Ruhl. This was a legit a mass monster – still is – and he trained like a monster. From the early 2000’s till right around when YouTube became a staple in 2008/09, Markus went totally viral. Ruhl lifted insane poundages, dressed like a meathead, and didn’t give two shits about political correctness.

He’d light up a Marlboro in the parking lot – and he’d inhale – and just didn’t care. He ate big, trained big, he was a blue collar bodybuilder with a thick German accent and he never pretended to be someone he wasn’t. What would have been the point of that? He was German and proud. He spoke German, whether he was in Germany, America, or Timbuktu!! His haircut was that of a freak’s, his mannerisms were all about No F*cks Given and he carried that demeanor with him – on and off the stage.

In 2003, he won the prestigious NOC (Night of Champions), stopping a very impressive Bob Cicherillo. This was probably the best Bob would ever look and many had him winning the contest, but not the judges. This was back when bodybuilding was about freakiness and guys were chasing mass monsters like Jay Cutler and reigning Mr. Olympia, The Big Nasty, himself, Ronnie Coleman. Guys like Nasser, who dwarfed then-mass monsters like Dorian, were still kickin around the pro circuit. What’s crazy about Markus, though, is he dwarfed Coleman. How many guys could do that? And Ruhl wasn’t fluff. When I say he dwarfed Coleman, he outsized him with dense, hard, ripped muscle. It may not have been pretty, but it was muscle alright, you could take that all the way to the bank!!

Bodybuilding was different back then. This was a time that doesn’t really get talked about too much because it wasn’t the 90’s, but it also wasn’t the 2010’s. The magazines were still doing pretty well, running parallel to the net. You had Muscle Mag, Iron Man, plus MD, M&F and FLEX. These publications still sold out and most had issues with 200-300 pages. The net was active, but magazines were still king, and so much so that Weider and MD would oftentimes try to sign the best athletes and keep them all to themselves.

In these day, a Pro would get paid for working or not working. If the magazine needed them for a shoot, they’d get paid. If they weren’t needed that month, they’d still got paid because no one else could use them. Although this restricted when and where athletes got press, I think everyone was happy – namely those signed. Having a guaranteed income allowed for competitors to focus on what mattered – training for competitions. Guys like Ruhl always sold w/e they promoted, that’s why he was always good to go.

When it came to Ruhl, you didn’t need a lot of special effects, he was it. Take the video where him and Simone went food shopping. Here are these two people, in love, and jacked out of their minds, walking around with their little shopping cart buying yogurt, oatmeal, and paper towels. They pass by mainstream people, dressed casually, just running errands and here come these two meatheads in cut-up, faded shirts, like they just literally left the gym – and they prolly had too. It’s not they were perfecting a look, they just didn’t give a f*ck. Who were they looking to impress? They were running errands just like anybody else. They weren’t looking to broadcast their physiques, but they certainly weren’t about to hide them under layers and layers of clothes, either.

Today, bodybuilders want to look GQ, they want to dress to impress, and almost be Hollywood. And that’s fine, but it all should have a place, in my opinion. Look good for the finals, out to dinner, or at a club or charity benefit, but to always look like you just had a haircut, like your clothes have never been worn, and like you just got off a makeup artist’s chair – men and women – who are you fooling? It’s ok to be sweaty, dissheveled, and look like you’ve been through a war. It’s like fitness stars don’t even perspire at the gym anymore, it’s like they could walk through a hurricane and their hair would stay perfectly in place.

Most of you are way too young to know about the original series Hawaii Five O, but here you had these guys in suits, with perfect hair, flying on a boat at like 50 knots and their hairdos didn’t move, nothing went flying in their eyes, they were totally just chillin. That looked SOO Fake, but hey, that’s TV for ya. Now, for the record, I’m not saying bodybuilders who look GQ in the gym are fake, but it’s not as exciting. The weights are real, the energy expended is real as well, but the viewers get shortchanged. Athletes shouldn’t lift for attention, but I’m talking about when recorded. If even for a staged effort, look meat and potatoes, pretend if you must!!

Guys like Markus Ruhl trained like lunatics, barbarian style, with the cameras rolling or not and that’s why people in 2020 are watching their videos from 2002 because they miss that today. Whether it was Ronnie saying “ain’t nuthin but a peanut” or “lightweight baby” or it was Ruhl or it was Nasser being his usual self, that’s missing today. This era also had JOJ and Branch, just killing it in the gym, with massive dumbbells, chains, in the sweltering Texas heat.

Today, it’s air conditioned gym, high-end bottles of water, and designer-only attire. Back in the day, I’d watch youtube videos while I trained, I wouldn’t even listen to music. If the workout videos had music, then great, but I watched my favorite bodybuiders train because they motivated me to get through my sets. I wasn’t watching them to learn how to lift, I was watching them because of all the heart they had. Today, things are way different. That’s not to say they’re not as good, they’re just different.