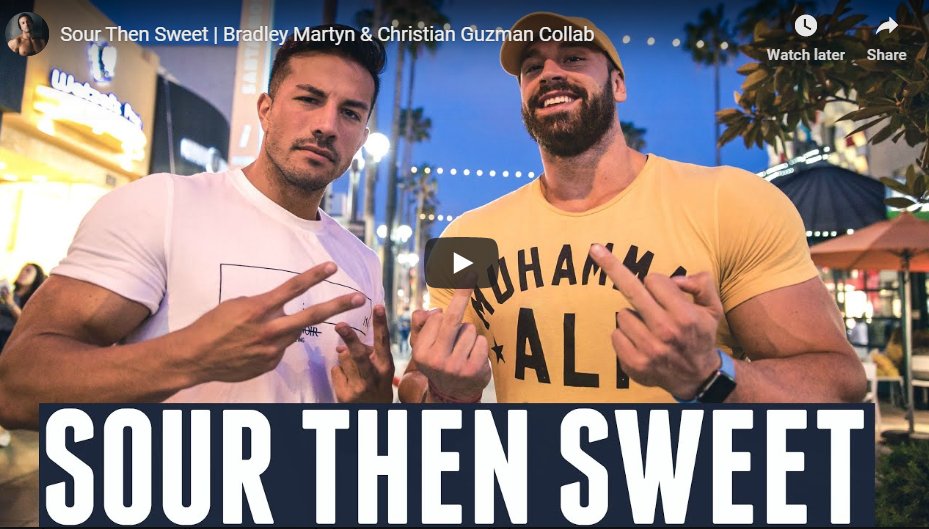 We live in a world where you don’t need to be born with the last name Kennedy or Rockefeller to be considered famous. Today, all you need is social media and a camera. Now, in the past, I’ve done several articles on influencers in the fitness space and broke down the good, the bad, and the ugly, but today I want to applaud the success and hustle of two fitness influencers in particular – Bradley Martyn and Christian Guzman.

I’m going to preface this by saying I’m not friends with either of these guys, I’m not being paid to talk about them, and in fact, I’ve never even spoken to either of them in my life and they wouldn’t know me from a hole in the ground even if they saw my name and picture. That being said, I respect the grind and hustle of these two.

You’re One Piece of Content Away from Blowing Up

No one picks up a camera and takes photos or videos and is instantly a professional. It takes upload after upload. Photo after photo. Video after video to get good at what you do. And if you record videos for YouTube, you can’t be shy in front of the camera. Bradley and Christian have focused on simply putting out the best content possible to grow their own personal brand which then allows them to utilize their influence to build actual businesses.

The fact is, we are all just one video away from blowing up – the key is to simply keep producing content that brings value and/or entertainment and let the market decide if your content is worthy or not. The next piece of content we post can gain us 100 followers or 100,000 followers. At any moment a piece of content can go viral – sometimes with no rhyme or reason.

Gone are the days where you need to step on a bodybuilding stage to make a name for yourself in the industry. Now, social media can make anyone a star and even bigger than the icons we see gracing the stage every year. Not to mention being able to make more money from their influence online than many of today’s competitors. While both Bradley and Christian have competed in the past, neither has reached IFBB Pro status to date. That’s not to say down the road they won’t try, but if I were a betting man, getting their pro card isn’t on either of their radar.

Take a good look at both Bradley Martyn and Christian Guzman. Both own gyms (Zoo Culture and Alphalete Gym), both own clothing lines (Zoo Culture Gear and Alphalete Athletics), both sell personal training (BMFIT and CG Fitness), and both have a line of supplements (Origin Supplements and 3D Energy Drink).

Most influencers put all their eggs in one basket, whereas Bradley and Christian have multiple streams of income. And we haven’t even talked about their YouTube revenue. Not only can Bradley Martyn and Christian Guzman make six-figures from the ads that run on their YouTube videos, but they are both able to promote their businesses on the platform to create even more revenue (which is smart to use as leverage and marketing).

In terms of net worth… according to WealthyPersons.com, Bradley Martyn is worth around $2 million and WealthyGorilla.com says that Christian Guzman is also worth around $2 million. All things considered, especially at their age, that ain’t too shabby. They both seem very money savvy and are leveraging their money to be used in assets that generate revenue (businesses).

Christian Guzman has come out within the last few weeks saying he’s under contract to build what he is calling AlphaLand – he’s also documenting it on his YouTube channel if you cared to follow along. Christian has found a huge building that will house all of his businesses under one roof while creating a fun and entertaining environment that everyone can enjoy. He said the only thing he can compare his vision to would be Rob Dyrdek’s Fantasy Factory – which if he can create such an environment, I absolutely would want to go see it.

And while we are on the topic of Rob Dyrdek, he had a television show that followed him round in his Fantasy Factory and showed what his life looked like while having fun at work. It’s not out of the question to see something similar coming from Christian Guzman with his AlphaLand. In fact, it would be a cool documentary serious that I feel many people in the fitness industry would be interested in watching (at least I would). It could be put out on Netflix, Amazon, or YouTube TV?

What Does the Future Hold for These Two?

It’s fair to say that Bradley Martyn and Christian Guzman are two incredibly successful businessmen in the fitness space. Each has flourishing businesses and it’s my opinion that they are only scratching the surface of what’s to come. Both, while they like to have fun, are brilliant business owners who see an opportunity in the space and take off running.

I wish them both continued success and maybe one day I’ll make a trip out to each of their facilities to check them out and possibly sit down and talk business. Keep your eyes and ears open though, as I feel both may also be working on some other projects that they haven’t yet told us about.