BRANDON CURRY: THE MR. OLYMPIA FOR THE NEW DECADE 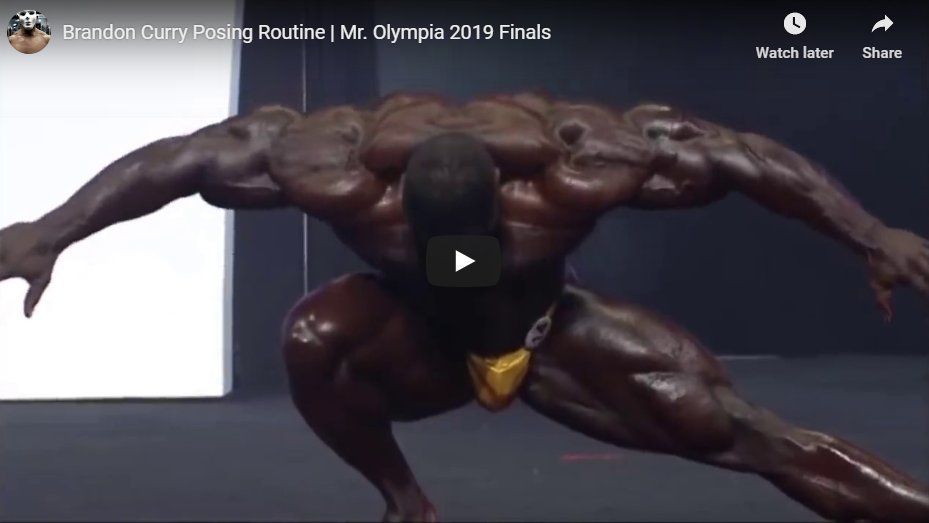 When you’re dealing with the best athlete, of any sport, you’re dealing with someone who’s given their absolute all, who truly strives for excellence, and will not quit in the face of adversity. In physique-based sports, the single, undisputed, best competitor of each and every division, must win at the Olympia level. There is no other contest, anywhere, that can bestow that distinction. With bodybuilding, the best in the world is Brandon Curry. As the winner of the flagship division, he’s not only the face of bodybuilding, but he is the face of all physique-based sports throughout the world. This is a very important responsibility that he has lived up to fully, from even before Day 1. Other champions, in other eras, can hardly say the same.

For years, this sport has had champions whose only interaction with the fans has come through articles they wrote in magazines and competing once a year. They didn’t go on tours, they didn’t participate in seminars, do in-store appearances or even attend major fitness expos. For many, once their business obligations were met, they disappeared. Some didn’t even resurface to train. One Mr. Olympia trained in his own basement gym. If fans wanted to see him, see how he acted, how he trained or maybe just to hear his voice, they have had to buy his DVD. Could you imagine that today? Other champions were more vocal, but again, largely through their contractual commitments (DVD’s, magazine articles, work for their sponsors) only. What’s even crazier though, is that many years later, we’ve come to find out that many of the articles we read in the magazines, were actually written by staff writers and editors – not the champions we looked up to so much. So imagine that! Even that fleeting link between champions and fans, wasn’t even real. So I ask you, were these legends of yesteryear really growing the sport?

A new era started in 2018 with the upset Shawn “Flexatron” Rhoden delivered upon 7x Mr. Olympia Phil Heath. He nearly beat him in 2016, but as the old belief goes, you can’t just beat a Mr. Olympia, you must knock him out. And knocking out Phil, is exactly what Shawn did; however, Shawn’s reign was cut short and for most of 2019, Brandon stepped up.

What does that mean, exactly?

When the news broke and Shawn had far bigger fish to fry than being bodybuilding’s top ambassador to the world, the throne became somewhat vacant. The only way someone is the best in bodybuilding, is by winning the Sandow, but long before earning that distinction, Brandon was already making the rounds as if he were the sport’s chief ambassador. This wasn’t to undermine Shawn and, in fact, I think Shawn appreciated it. Other past champions, like Phil Heath, could have stepped up, but they didn’t. Brandon toured the world, met with fans, and carried the flag. He’s the kind of champion bodybuilding needs. He’s not a self-serving person, he’s not fueled by the pursuit of money or fame, he’s a blue collar champion, a working man’s champion. Brandon, like Shawn, really turned a new page.
Brandon didn’t have an easy amateur career and he didn’t win show after show once turning pro, either. In fact, there was a pivotal moment in his career. When he went to Kuwait and linked up with Abdullah Al Otaibi and the Oxygen Gym community, everything changed for him. He went from having a struggling pro career to an amazing one. Nonetheless, the fact he struggled for years, earned him considerable credit as a guy who really paid his dues. Then in 2017 everything changed, with three key wins, 2018 saw him break into the Olympia Top 5, and 2019 saw him win the Arnold Classic!! Yes, he’d go on to win the Olympia in September, but from early May to that point, the sport needed a leader, and he took that role 110% as his own. That’s very noteworthy.

Once as champion, the work continued, but on a much more intense level. Brandon continued to strengthen ties to the fans, through extensive travel and appearances, but much like Lee Haney, he continued to share other aspects of his life. Curry is a good husband, father to his kids, and pillar in the community. The fans have a real role model to look up to; it’s not only cooking meals and training in the gym. There’s a lot more to this champion. Unlike many of his predecessors, Brandon doesn’t use his title or fame to brag about material possessions, the accumulation of wealth, or to sing his own praises. He’s not in love with himself, he can accept criticism, and he’s not the type to lose his temper. His work includes coaching sports, speaking to everyday people, and working with global sponsors and small businesses. He’s also gone into business for himself, co-owning one of the most state of the art gyms in the country. That, too, is a great quality to promote – entrepreneurship.

The key to growing the sport isn’t necessarily anything that’s physique-based. That may seem a little bizarre, considering that muscle is what most people see first and it’s probably what most people want to gain for themselves, but has muscle made bodybuilding a household name, as of 2020? It takes more than that. Entertainment is also important, but even when you put everything into that alone (e.g. the WBF), that’s enough, either. What’s needed is a new kind of champion and that new kind of champion will help mold the new kinds of pros needed. Every single IFBB Pro League Pro should be an ambassador, each pro should strive to narrow the gap between them and the fans, and each pro should want to promote positive things (e.g. healthy relationships, family, honoring their word and taking pride in themselves and their work).

Unlike other champions who have had to deal with the usual nonsense, from hostile media outlets to trolls on social media, nothing could prepare a champion for the Covid 19 pandemic. With contests cancelling and postponing left and right, gyms closed throughout the world, and both competitors and fans dealing with a myriad of emotional issues due to lay-offs, stay at home orders, and social distancing, Curry stepped up. From IG Lives (which have spread like wildfire), to collaborating with contemporaries and legends from yesteryear, to reposting stories and interacting with the fans, Brandon has set the bar high. He showed everyone else what needed to be done; he took the initiative because he’s Mr. Olympia. No champion in the history of bodybuilding has worked as hard and as consistently, as our current champion. For anyone to say that Brandon doesn’t have the personality or the charisma to really grow this sport, simply shows just how out of touch with reality they are.

With regards to fitness, Instagram is king, and the IG Live has become an increasingly significant social interaction tool. It cuts out the large media outlets, making it a very direct, very personable interaction between the star and the fans. This is a feature that Brandon pushed very hard from the very beginning of this nightmare. As a result of doing his own Live’s and joining with others on theirs, the champ shined the light, and now the sport has a direction. Could you imagine where we’d be if we had an absent Mr. Olympia? Where would we be, if today’s champions only cared, if they were being paid to care? It’s a different era, a far better era!!

What’s also very telling, is you’ve read a whole article about Mr. Olympia Brandon Curry, and you haven’t (nor will you) read about what his physique will look like and/or how much muscle he will have gained. We’re not talking about condition, symmetry, or posing routines. We’re talking about the best bodybuilder in the world, leading the fitness industry through one of the darkest hours in history. We are very lucky, very blessed, to have Mr. Olympia Brandon Curry.