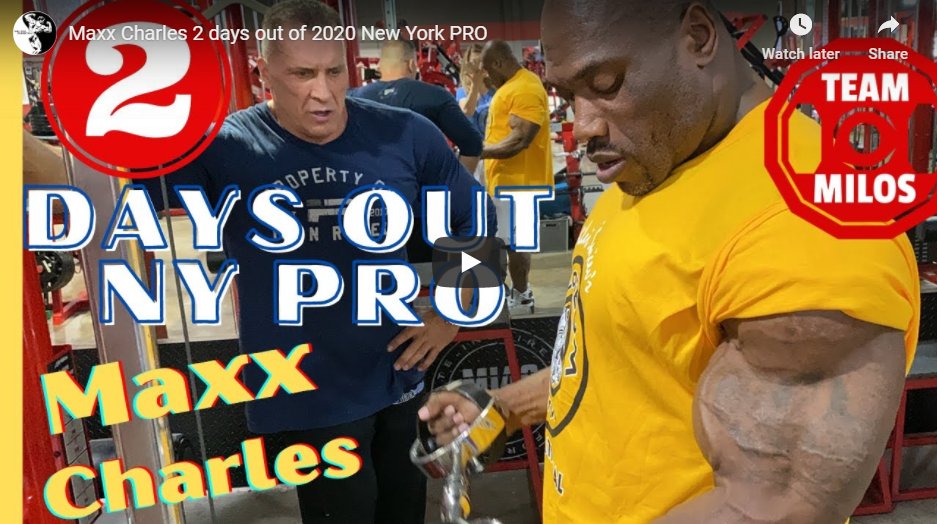 It seems that The Destroyer has really paid his dues over the years, competing at multiple contests – nationally and internationally – and taking respectable placings. Just this year, he cracked the Top 10 at the Arnold Classic, took Top 5 at the NY Pro (where many fans, myself included, thought he should have placed much higher), and just took 2nd place to Antoine Vaillant at the 2020 Muscle Contest California.

Just last week, when I posted a video to social media speaking to my hopes that Charles make it to the Olympia stage, he commented that he was poised to doing just that. Now, unlike other outlets, I could spend the whole article crying over placings, but that’s not what this article is about. This article is about a real fighter, a guy with a will to see his goals realized, a competitor with an indomitable spirit and a qualifying system for the Olympia that should be revisited – especially in a year like 2020.

His placings are great, but unless he wins a contest outright, he will have to continue accumulating points and hoping he gets enough to earn him a spot on the most prestigious stage in physique-based sports. I know a lot of guys would frown on qualifying through points, but you all know where I stand on that. I don’t think it matters how you get there, as long as you do.

At the end of the day, no one goes back and asks, “gee, I wonder how Mr. Olympia qualified to get to the show.” That being said, qualifying by points isn’t pie in the sky, either. It’s far from it, actually. You may be in the lead today, take a much needed break for the O, and before the deadline hits, find your lead has dwindled and you, actually, came up short for qualifying. I have a feeling Maxx will keep competing until he wins a contest or the deadline falls.

Maxx is a fighter – that’s a statement I can’t say enough times and that’s why I think so much buzz is being generated over him. There’s competitors who basically walk into a contest and with minimal effort, get wins. I don’t think the fans look at those guys with much interest. Take life, who doesn’t struggle, who doesn’t come up short? It isn’t so much about winning. Winning is nice, making money is too, but what defines you as an athlete, as a worker, as a man or woman, is what you do when all your hard work and all your sacrifice isn’t enough? A lot of guys complain, other guys quit, but only those who are really hungry, go on. Sometimes, something better comes along, but ultimately, you either reach your goal or keep trying.

Bodybuilding has got to be one of the most difficult sports around. No other sport is as subjective, at least not to this extent. There’s sports like boxing where you definitely scratch your head at some decisions; but even boxing, if you knock someone out and they ain’t movin, you beat em!!

In bodybuilding, it’s the absolute extreme of subjectivity. I don’t normally have a major issue with judging because I know how much training and oversight is involved, but there are decisions where I just don’t understand what they were looking at. Maxx at the NY Pro, for example, made little sense to me; however, you can always apply Bob Cicherillo’s coin phrase, “it’s all about apples and oranges.” You can be the absolute best orange – you can be orange, round, ripe, etc, but if the judges are looking for an apple, then you’re SOL.

2020 has certainly been a year full of challenges for us all, but for guys like Maxx Charles, it’s just par for the course. When the gyms closed, everyone assumed that all the pro’s had places to train. That’s an assumption that truly didn’t apply to all. Most people really don’t know what these great champions had to do in order to keep training. For lifestyle lifters, everyone was going complaining on social media and message boards, but imagine how high the stakes were for professional physique-based athletes, with contests on the horizon, and prospects of qualifying for the Olympia. This, again, is why bodybuilding truly is one of the toughest sports out.

When gyms closed and things got iffy, every single major league sport, one after the other, called their seasons quits. In bodybuilidng, promoters, much like competitors, simply refused to give up and they went on. And not all shows happened. In fact , a great many were postponed and canceled. What does that do to a top tier competitor? You have training, meals, and gear, not to mention posing and all the psychological preparation that’s entailed in putting 16 weeks of hard work into looking perfect for a few minutes on stage. To then have the rug pulled from under you can be catastrophic; nonetheless, most of the pros just brushed it off and kept going.

I have no doubt Maxx will get to the Olympia, but what bothers me is that all those guys trying to get there by points, may very well burn out come the Olympia. It’s one thing to do a lot of shows in a year, but it’s quite another to do a lot of shows in a two month window, then take 4-8 weeks “off” while also trying to regroup and bring the very best, possible, for the biggest contest in the sport. There’s only so much the body can take and I, personally, would like to see some of the real fighters, like Maxx Charles take benefit of a special invite, should they just miss the mark by points.

Yes, it’s the Olympia, and no, not everyone should get a spot on that stage, but 2020 has been the year from hell. If ever there was a year where the special invite could be used, for more than one athlete, this would be it. I’m not saying invite everyone, but guys who have done 3, 4, 5 contests from the Tampa Pro on, should certainly get a second look. While those qualified can eat, train, and go at their own pace, these other guys trying to win or accumulate points are competing in masks, posing in front of empty venues, and rolliing with all sorts of punches. There has to be a better way of doing things and if 2021 is anything like 2020, hopefully the way folks qualify for the O gets revisited. All in all though, I have zero doubt that Maxx Charles will be on that Olympia stage, but hopefully he doesn’t have to compete all the way to the deadline.