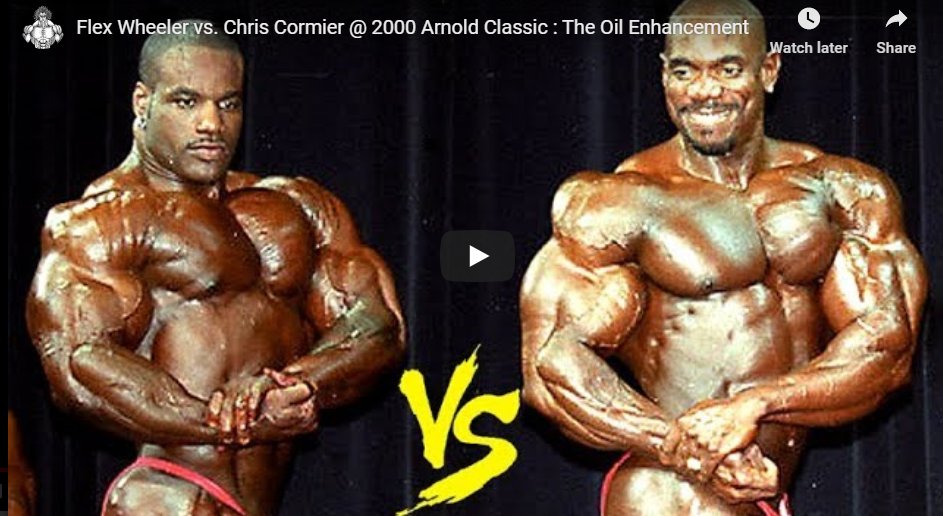 Bodybuilding is a sport all about comparisons. The judges scrutinize physiques and oftentimes comparisons are necessary to determine placings. There’s guys who excel with shape and condition, others push the mass card, and some are such great posers, they can hide any flaw and still seem perfect. The media also loves to compare competitors, as it provides them with article ideas and program bylines to run with. But the folks who love to compare the athletes the most, would have to be the fans.

Whether it’s fans talking at a contest, on the message boards, or throughout social media, comparisons are at the heart of most discussions. We’ve heard it’s not good to compare eras, but fans of each time period think theirs was the most demanding, theirs was the most cutting-edge, and theirs was the most classic. The truth of the matter is, the 1990’s were pretty darn special for bodybuilding. There was so much going on at the beginning of the decade, its middle, and definitely at its end. What’s interesting about today’s article, is that unlike comparing bodybuilders from today versus yesteryear, we’ll be talking about two legends who basically competed together, while both were more or less at their prime. What’s even more noteworthy is that this article was inspired by a comment made by 2008 Mr. Olympia Dexter “The Blade” Jackson in his interview with Patrick Bet David at Valuetainment. In that video, Jackson asserted that Chris Cormier, aka The Real Deal, could have been better, had he given 100% of his attention to bodybuilding, than The Sultan of Symmetry, Flex Wheeler. Bet David was stunned, but why?!?!

It’s interesting, because there are a lot of similarities and contrasts between Wheeler and Cormier. Chris was a fantastic bodybuilder, living in Venice Beach, CA, and getting a lion’s share of the media. Most younger fans today associate him as the King of Max Muscle, probably because his videos chillin on the couch went viral then and today; however, he battled against the best of the best on stage. He was Top 3 at the Mr. Olympia, he won the Ironman Pro 4x, and he was even offered the chance to train with 6x Mr. Olympia Dorian Yates in the UK. That last note really made the rounds, becoming almost fitness industry folklore, because Dorian believed he could help Cormier win a Sandow. If anyone could push Cormier to the max, it was believed to be Dorian. That being said, you probably wouldn’t think that a guy with a resume as impressive as Cormier’s would need anyone pushing him, but that was also the running theory on him – and not just him.

People always talk. The fans mean well, but often say things that make little to no sense. One of the most commonly heard criticisms of both Cormier and Wheeler, was that they didn’t give it 100%. That was a point made by both fans and media. Still, that doesn’t mean anything. Media is also notorious for making silly statements, whether it’s in hopes of drawing hits, magazine subscriptions, or simply because they may not know any better. However, when champions like Dorian Yates, then, and Dexter Jackson, today, echo those sentiments, then it’s definitely food for thought. Still, I’m not totally convinced, either.

When Gregg Valentino used to do programs for IronMag TV, he’d often talk about when Dorian Yates went out clubbing in NYC; he often talked about how much The Shadow liked to party. If Dorian had a social life and won six Sandows, then could partying really have stopped Cormier? That’s the part with the whole “they didn’t give it 100%” argument” that I don’t quite get. What could they have done differently? Trained more, lifted heavier, ate more and/or dried out more? Then again, maybe the level of partying that Cormier was allegedly accustomed to, was far more intense or often, than Dorian’s. I can’t say for sure, simply because I wasn’t there, but Dexter was. Not only does he know, but he’s tight with Chris, and when he made that statement at Valuetainment, it was most certainly not a dig, if anything, it was a compliment. What I found very bizarre, is that Bet David had to ask Dexter a second time. It’s almost as if he needed to be absolutely sure that The Blade meant what he said. That part, I thought, was a little weird.

If Chris Cormier, at 100% in his prime, stood next to Flex Wheeler, at 100% in his prime, I would have to see them hit each and every mandatory pose, before I could even consider picking the winner. I’d have to judge their transitions, really look at their abdominal sections, and maybe ask them to hit the mandatories for a second time. I don’t think it would be an open and shut case for either of them. That opinion may not be shared by most, but that’s my God’s honest opinion. I just don’t see Cormier as being at any substantial disadvantage next to Wheeler.

Chris had the structure, the muscle, and ability to really entertain an audience. The guy had real personality and in bodybuilding that’s huge. If you don’t have a sense of humor, if you don’t live life to its fullest, then you’re boring. Who’s going to want to read your interview? Who’s going to want to cheer for you from the audience? I don’t care how impressive a champion’s physique is, if they have nothing else to offer, they’re not going to be a draw. The fans loved Cormier, then and now, because he had the great physique, but he was also someone that people could relate to, and someone people wanted to emulate. Still, I don’t think he’s held in the same regard as Wheeler. I can’t really put my finger on it, but Bet David’s reaction to Dexter’s assessment speaks directly to it. It may have been weird to watch, but it’s a sentiment that is shared by many bodybuilding fans.

One reason why, for many, Flex would be the obvious choice, is because I think he actually got closer to nailing his 100% best. I don’t think he ever quite got there, but he got pretty close. Like I’ve always said, had I been a judge, Wheeler would’ve won the Sandow in ‘98, but that wasn’t even his best look – crazy as that may be. In fact, Ronnie often says, Wheeler was the best competitor he ever faced!

That ‘98 Olympia was Flex’s to lose; the whole world looked at him as the heir apparent. Maybe he’s earned some sympathy points for that defeat. Also, Wheeler was able to bounce back from a near-fatal car crash in the early 90’s. I know for a fact that the fans have a world of respect for that. Look at Roelly Winklaar’s motorcycle accident some years ago. When he got to the gym, he gave it his all, and reclaimed his career – that’s straight out of the Flex Wheeler playbook. It’s that heart that won him the NOC and four Arnold Classic titles. Even when he was diagnosed with kidney disease, the guy kept competing and kept placing very well, so I think people’s recollection of Flex as a fighter against all odds, may also contribute to why so many would pick him over Cormier, almost without thinking about it.

Again, if both guys reached their true potential, both at their prime, I just don’t think there would be a clear cut winner. That being said, I guess we’ll never really know, but the debates are part of what makes this sport so much fun. In fact, I’m conducting a poll at @StrengthAddicts on Instagram on this very matchup, even as I write this article. I have periodically checked my phone to see where the vote’s are at and it’s pretty much a tie. Flex has maintained a slight lead all throughout, but it’s, at best, a razor-thin. That says a lot; it’s really anyone’s guess. I mean how do you compare two physiques at their best, without even having a single photo of what their best truly looks like? That’s the argument at the heart of this article and why it’s also so frustrating, because both of them could have been Mr. Olympias!! This is almost akin to those apps that predict what people will look like in their old age. At best, it’s just a guess, with a lot of imagination, and that’s ultimately what a hypothetical comparison is.

So, I’ll ask you, the readers, because your opinion is the one that matters most. Who do you have winning? Both at 100%, both at their prime, and both standing side by side in front of you? The Sultan of Symmetry or The Real Deal? There can be only one winner, so, who wins?

I hope you enjoyed reading my article, here, at Iron Magazine. I look forward to reading your feedback in the comments. I suspect the vast majority who cast a public vote, will feel the need to accompany that vote by an explanation. Like I said, this isn’t as cut and dry, black and white, painfully obvious, as some would have you believe. Then again, maybe it is, for you.