DAVID HENRY COULD BE THE SHOCKER IN ORLANDO 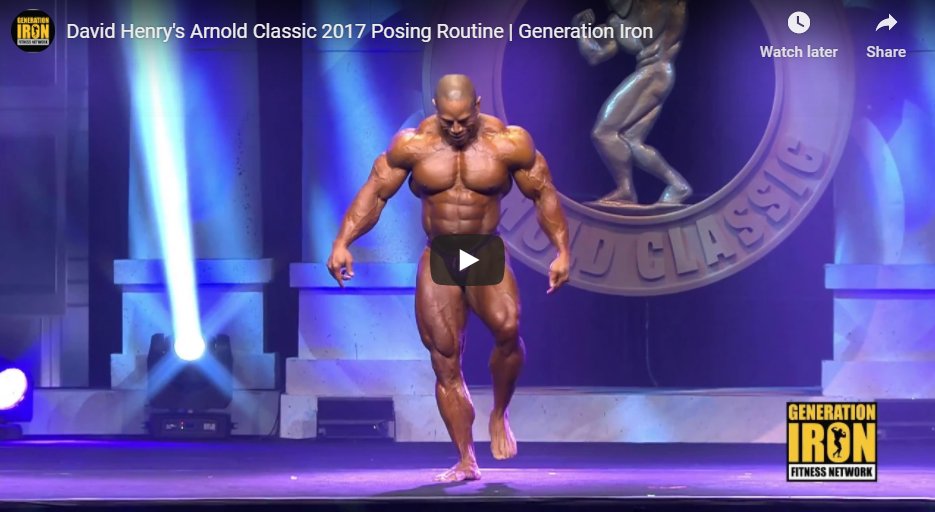 When it comes to superstar bodybuilders, you don’t get much bigger or respected than IFBB Pro David Henry. For years, he battled at the Open, he rose to the top of the 202, and then continued his dominance into the 212. I’ve met him many times before and I have a huge amount of respect for his physique. He’s more low key and not as chatty as others, but he’s 100% a bodybuilder’s bodybuilder.

His back has been compared to that of G.O.A.T., Ronnie Coleman, and he’s gone the distance with some of the best physiques in the history of the sport. He’s shared the biggest stages in the world with legends like Kevin English, Jose Raymond, and 7x 212 Olympia Showdown Champion James “Flex” Lewis. Over the years, he’s continued to maintain his muscle mass, symmetry, and balance. Much like Dexter Jackson, age has had no effect on Henry’s physique. Further, he’s also been able to make key improvements to keep his look up to date with what the judges want year-to-year and he’s seen his place in the pecking order change.

At one point in time, the mere mention of his name, inspired fear in the hearts and minds of his fellow competitors. Commentators and handicappers would give him the win, almost without thinking, because he was just that good. Interestingly, he never stopped being that sharp, but he started getting less and less love from the media. Some might argue, for whatever reason, the judges didn’t focus on him as much, but that’s totally debatable. Judges are often blamed for everything from questionable scores to the price of rice in China. They’re only human and they have to make tough calls, with just seconds to work with. I think we can all agree that these folks (who don’t get paid by the way) have their work cut for themselves. That being said, David’s place in the sport has changed and how he’s adapted to that reality, is part of why he’s developed such staying power.

In 2019, no one cared about David Henry. No one cared about Shaun Clarida, Eduardo Correa, or even Kamal El Gargani (who’d go onto win the title). That year was all about blowing Derek Lunsford up. I think Jose Raymond and Nate Telow hit the nail on the head in how they discussed what the media did to Lunsford, on their podcast. Anyone who gets thrust into the spotlight, will enjoy it, and try not to lose their mind, but he Derek was getting so much press, that when he didn’t score the win, the whole industry turned on him. I remember seeing eating a meal, after the O, looking totally defeated, and almost sullen. I thought to myself, “what’s he got to be sad about, he took 2nd,” but that’s just how hard the powers that be in the press pushed him. So with that context being thoroughly articulated, a guy like David Henry had to work just to get noticed – forget about being looked at as a potential competitor to get a top placing. When I approached him at the Olympia Meet & Greet, there wasn’t a single media outlet there. 5-10 years ago he would have been hard-pressed to get in a word in edgewise with all the reporters bombarding him for requests for photos, interviews, or to talk “off the record.”

Folks, bodybuilding is not purely about muscle. It’s just not. You can choose to be a purist and subscribe to the fiction that only the best physiques win, but this sport is also a popularity contest. There are trends, just like in music, fashion, or food. I can’t say the judges respond directly to the whims of what’s in or what’s not, but the fans wield a considerable amount of influence insofar as what direction the sport goes in. Where it gets a little dicey, is that many of the so-called fans, don’t know a thing about bodybuilding.

The sport’s media plays a very important role, as well, particularly social media influencers, and to a lesser extent sponsors. I don’t know what happened, but all of a sudden fans started talking less and less about David Henry, his placings started to suffer more and more, but the quality of his physique was always consistently top notch throughout the entire process. Some guys living in that reality might be very tempted to quit, but he didn’t. He went from being a top dog to a guy that was all but ignored. I don’t know what kept his head in the game and I don’t know how or why he did it, but he never pulled back.

What can you say about a competitor who was on top, but now is not. A guy who gives his all, almost knowing for a fact he won’t get looked at like he deserves and it’s almost more likely that hell will freeze over than him winning the 212 Olympia Showdown or the 212 Arnold (before they scrapped it). We can sit here and talk about bodybuilding motivational videos and killer soundtracks to lay over them, but if you ask me, David Henry has more motivation than most guys I’ve come across in this industry. In 2019, he even went out and won a contest post-Olympia, simply to remind the world that he was still firing on all cylinders. And in addition to his physique and his work ethic, he’s also the gel that keeps the 212 going. What do I mean by that?

On a recent podcast I did with Charles “The Tank” Dixon for StrengthAddicts.com, he said that David is the bridge between the old school guys and the young guns. He keeps everyone united, which is a key component of The 212. Unlike Men’s Physique and Open Bodybuilding, the 212 has always been like an extended family. In my opinion, the media may have tried to mess that all up by pinning guys against Derek in 2019, creating a lot of unneeded tension. I, myself, know that I was overly critical of Lunsford in 2019 and most of it wasn’t of his doing. Again, if you haven’t listened to The Boston Mass Podcast with Jose Raymond and Nate Telow on this point, I highly encourage you to. That being said, David is integral to the division staying true to its roots and promoting a real sense of unity. In a lot of ways The 212 is a throwback to the way bodybuilding used to be in The Golden Era and that’s why so many fans love it.

When it comes to physique, you know David will bring his best – like he always does. The question is will the media give him attention? We already know that they won’t. Will the judges really look at him? That we don’t know. Do the judges read my articles and keep up to date with what the bodybuilding media is saying? I’d say they do. Again, I think it’s all relative.

Guys who are talked about, guys who get a lot of applause, and guys who are constantly mentioned by handicappers and influencers, tend to get looked at more. If you disagree with me, then you disagree, but I think everything factors in, when looking at the big picture. After all, we are talking about a subjective sport and judges are human – last I checked. If my article can help David in any way, it’s my pleasure, because he’s the kind of guy who truly deserves a second and third look. Move him to the center, compare him to the industry favorites, and watch the crowd go nuts!! People would lose their minds if David Henry looked like he’d be in the Top 3, battling with Shaun and Kamal, holding his own, and each of these three guys pushing each other – even for a single, early callout. That’s totally out of all of our hands, except for a panel of every important people.