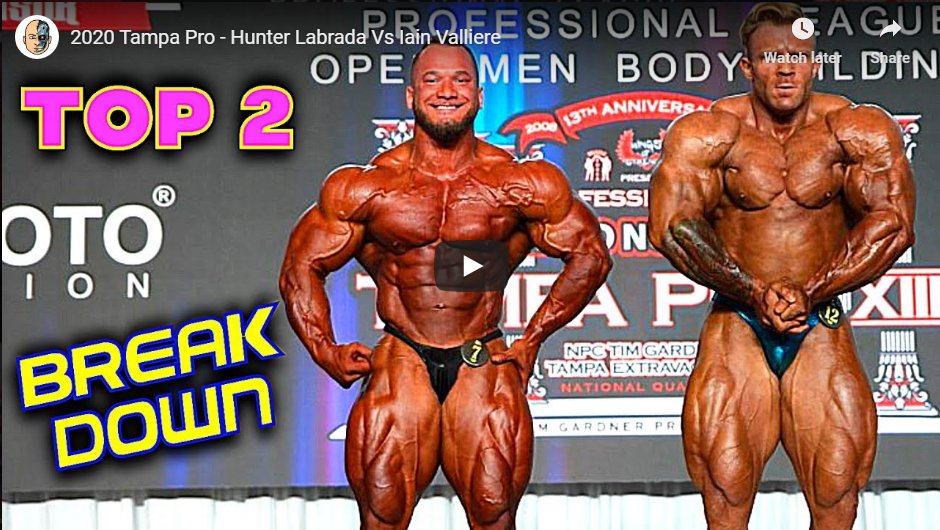 The rivalry between Hunter Labrada and Iain Valliere was set the moment the placings were announced at the 2020 IFBB Pro League Tampa Pro. There was a lot of build-up leading to the contest, as fans all over the world had been typing away on the message boards. Some of the sports most outspoken bodybuilding pundits had also weighed in, but in the end, the only opinions who ultimately count, are those of the judges.

Although Hunter clearly won the prejudging, I think it’s pretty fair to say that the gap narrowed, considerably. There were other factors at play, for example, we’ve seen a lot of showdowns between Americans and Canadians. Both countries have healthy rivalries in hockey, basketball, and especially in bodybuilding. But don’t just take my word for it, just look at the ultra-competitiveness of NPC and Canadian Physique Alliance athletes as they prepare to hit the stage at the 2020 NPC North American Championships in Pittsburgh.

When it comes to Iain’s look in Tampa, there seems to have been an issue with water, as substantiated on a great interview conducted by Dave Palumbo, with Iain, for Rx Muscle. Without throwing shade at Dave, if there is any kind of rivalry to be exploited, Palumbo is the guy to do it. I found the interview to be factual. For example, I had no idea Iain traveled alone to Tampa, which to me seems kind of bizarre, but let’s not forget the times we’re in. Travel restrictions are very intense so the fact Valliere was even able to hit the stage was a triumph in and of itself. The Canadian superstar reflected a great deal on all aspects of his presentation, even comparing the look between Liquid Sunrayz and Pro Tan. For those not in the industry, talking tans can be pretty ballsy, especially when opting for one giant for the other. Tanning experts might try to shift the blame onto the athlete, but all in all, not all tans work the same for all athletes. That’s just something that needs to be recognized. What I found, particularly, unusual about Iain’s post Tampa comments, is that he was purportedly done for the year. I think anyone who takes 2nd at an IFBB Pro League contest should keep going. I would love to see the guy on the Olympia stage, but even after watching this interview, there’s still a lot of questions that were left unanswered.

Dave Palumbo even said it, Ian has an Olympia-level physique, but also pushed the idea that Valiere could make more money being another a Youtuber than an active competitor. Although Palumbo insists, he wasn’t trying to convince the Canadian champion out of competing, it sure sounded like it to me. From citing his decision to drop out of med school, to citing the pressure Luke Sandoe was under, Palumbo seemed to be pushing Valliere to do “what made him happy” and it almost seemed as if the implication was for Iain to quit competing.

It’s clear Valliere is upset losing to a kid who just two years ago won his pro card at the NPC Nationals. I’m sure there’s a temptation to undercut Labrada’s win because of his last name, his father’s accomplishments, or even the fact Hunter is American. The fact is legacies have it harder than just about any competitor. They’re constantly in the shadow of their superstar parents and they oftentimes have to fight harder than most, just to get noticed.

To say that Hunter “looked like a child” next to Valliere in certain poses, whatever the context, is patently absurd. Palumbo didn’t correct the comparison and was very supportive of his guest, in easily winning the NY Pro. Dave is a great interviewer, but he’s also a terrific bullshitter. I don’t want to imply that Iain can’t win a contest, but for Palumbo to say it that boldly, as if the NY Pro was the Mr. Mayberry contest, that just sounded a bit squirrely to me. Tampa is, arguably, the 4th most important contest, with NY being the 3rd. Ian almost won Tampa and took a respectable runner-up, even though he was flat and his tan was a little off. That being said, Tampa was a battle, and NY would be as well.

What happens if Dexter Jackson decides to throw his hat in? What if Big Ramy jumps into Tampa? What if Cedric wants to do the O. Does a 100% Iain beat a guy like Ramy, a guy like Cedric, or a guy like Maxx Charles or Akim Williams at 100%? I don’t know. I honestly don’t know. Therefore, Palumbo was way off to say Iain could win NY with the level of confidence and ease that he did.

Again, that’s not to take anything away from Valliere, but lets be real, here. I’m glad to hear he’s committed to competing again because after Tampa, I read several reports that he was done for the year and I was disappointed by that. The guy is on the ball and he’s hungry – which is awesome, but Dave is nuts. He’s got Iain doing the Spain show, prepped by Dorian, he’s got him doing the NY Pro and winning that easily, and he’s just pumping this guy up on air. The truth is Dave is a great bullshitter; he may not know if he’s on foot or horseback, but he knows how to sell whatever it is he’s saying.

The bigger question is what do you, the Iron Magazine readers, think? Could Iain win the NY Pro, the Chicago Pro, or the Spain contest? How close was the Canadian giant to Hunter Labrada? If he’d filled out better and his tan had been better, would these two factors have changed the outcome in Tampa? In my opinion, Iain could win, depending on who shows up. I don’t think he beats some of the guys who typically place in the 6-8 spots at the Olympia. I also don’t know that a few carbs and better spray tan would have flipflopped Valliere and Labrada at Tampa. That being said, it was very close and it was a fantastic contest. Do I think Iain could best Hunter in the future? Absolutely. I just don’t think it was that close in Tampa.