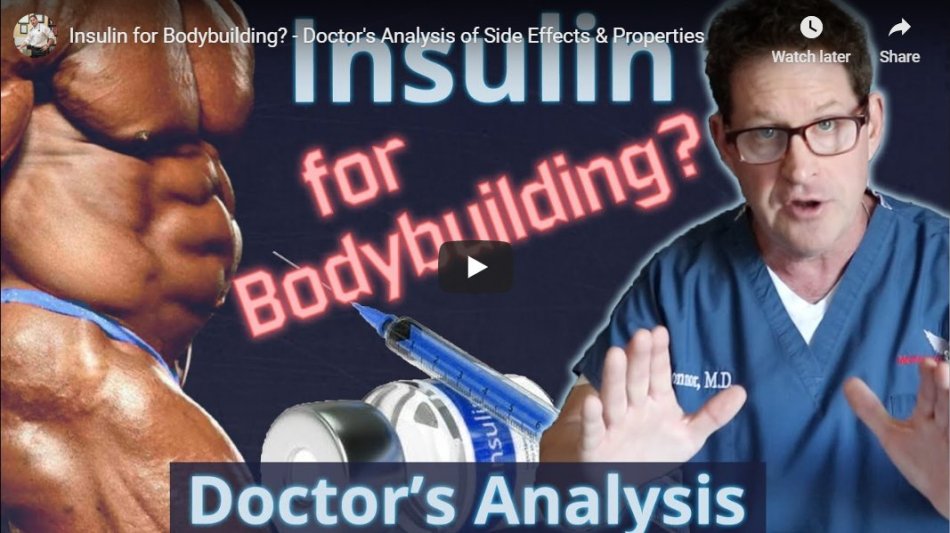 The mere mention of insulin in the sport of bodybuilding brings a ton of reactions. The vast majority of people know to stay away from it. While it’s far more anabolic than testosterone, if it falls into the wrong hands, the risks are far greater than pretty much any substance used in the fitness industry. The only other class of compounds that are remotely as dangerous, would be diuretics; however, those are usually used during the final hours of peak week prior to a contest.

Insulin, other hand, is oftentimes used and abused during off-seasons, building phases, and even during contest prep. A lot of guys (and more muscular women) require it to build size. As with any compound, I’ve been told by competitors that the body builds a tolerance, whereby users require greater amounts to get the same desired effects. The fact insulin is used throughout the year, at varying dosages, and the fact it’s legal in many states, makes the danger far greater.

When it comes to gear, I can say that I’ve never heard of anyone who’s died as a result of using anabolic steroids. In fact, the first thing that comes to mind when even contemplating this notion, is John Romano’s voice on that special with John Stossel, where he asked the question, “where are the bodies?” It was classic Romano and a very telling openended question. While some people with preexisting conditions or a family history of such have been adversely effected by gear, no one that I’m aware has actually died as direct result of them. Romano, nor anyone else, would be able to shoot off the same question about insulin. Slin can directly lead to death, has directly led to death, and is without a doubt one of the most dangerous substances in the fitness industry.

Nothing puts on size faster than insulin. I’ve seen guys add all kinds of weight to their physiques, even at the cost of losing their lines, compromising their symmetry, and developing a very unappealing puffy look. Why would anyone want that? Well, everyone in bodybuilding wants to be bigger. Size is king and it’s something everyone is after. Mass monsters get a bad rap because they’re viewed as putting more emphasis on density than on cuts and separation, but the truth is, even smallest guys with the best lines, they want size, too!! Everyone wants size!

Apologists will argue that insulin, like antying else, used in moderation and implemented during strategic times of a mass-bulding phase can contribute to gaining quality muscle. For many guys, in particular, the combination of gear, hardcore training, and shoveling in the calories simply takes too long. They want to put on crazy size in record time. If bodybuilders weren’t in a rush to get bigger, stronger, and freakier, then most would stay natty indefinitely.

The bottom line is you can get pretty gnarly with just food and training, but you have to be ready to wait for many, many years. That’s a big misconception with juice. Not all guys who get on the sauce do so because they couldn’t realize the gains naturally, rather, they just don’t want to wait. This is also why insulin is so sought after, because it might take years of juicing, lifting, and eating to put on the kind of size that only a few cycles of insulin would. The guys who want to be the best, are some of the most impatient characters out there!

Patience is a virtue, but anything done in haste comes with consequences. The abuse of insulin, at the very least, can and has made perfectly healthy individuals into diabetics. There’s a whole slew of potential risks, including heart attack, stroke, eye complications and kidney issues. The worst risk is death and I’m afraid to say that insulin is rumored to have been the main culprit in many bodybuilding star’s demise. It’s rumored to have cost one promising champion’s life not too long ago.

When it comes to insulin, it’s often said that it must be followed up by huge amounts of carbs, simple carbs, in order to gain size and give the insulin the ability to counteract the sugar. If this key step isn’t followed and/or not followed in time, it’s been said that users may get more and more tired, succumb to taking a nap, and slip into an insulin-induced coma. This can and has resulted in death.

Insulin is seriously not to be played with and this is why so many people run for the hills whenever it’s mentioned. Nonetheless, a great many swear by it and insist that so long as you know what you’re doing, you’re ok.

What’s interesting is that before the mid 1990’s no one ever used insulin the way it’s used today. Some have said Dorian made it big, others credit Dan Duchaine, and others look to some of the most inflential coaches of the era. The bottom line is, insulin hit the scene and never left. Despite its very serious potential consequences, it’s used and abused.