IRANIAN BODYBUILDER JAILED FOR QUESTIONING THE CLOSURE OF GYMS 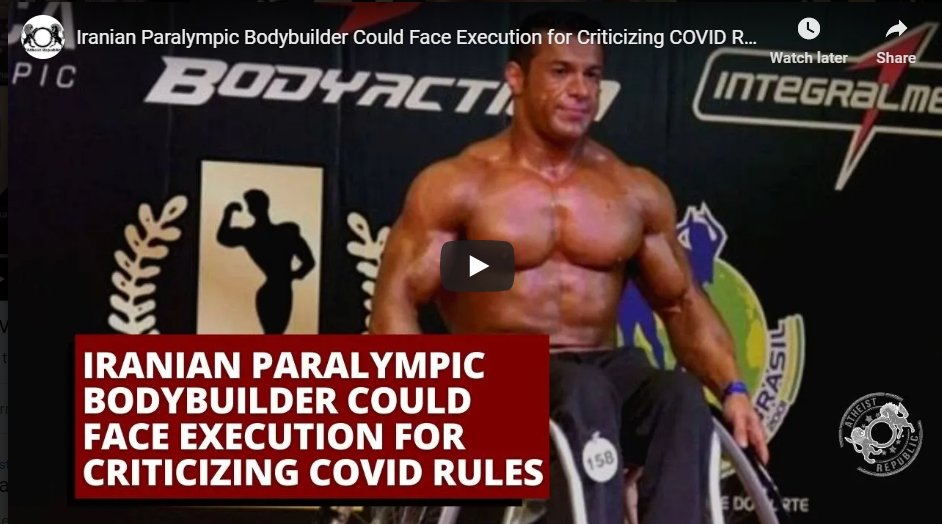 Just when you think COVID restrictions and the mainstream media couldn’t get any more ridiculous, an Iranian bodybuilder by the name of Reza Tabrizi has been arrested for questioning the closure of gyms. No, I kid you not.

Here in the US, we have the ability to speak freely about things on our mind and the things we disagree with (unless you’re Facebook or Twitter, and then they’ll censor anything and everything you say that doesn’t align with their agenda – shot fired). However, our same 1st Amendment right (the freedom of speech) does not exist over in Iran, which can lead to a jail sentence and even death.

Do Not Pass Go… Go Directly to Jail

A simple Instagram post has landed an Iranian bodybuilder in jail. Yes, you heard that right. Reza Tabrizi posted on Instagram that he felt it was hypocritical to close down gyms over COVID, yet shrines remained open. Not only was he thrown in jail, but they are calling for his execution over his post.

In the Instagram post, Reza said, “Why are gyms closed during COVID-19 pandemic but religious shrines to remain open. After all, does the virus discriminate based on the location?”

His arrest took place at his gym, where Iranian police put him in the back of their vehicle and escorted him to jail while a mob in the streets witnessed the entire event take place. The mob in the street then decided to break in and destroy his gym after the police pulled away.

An official with the Iranian regime said Reza posted a “threatening insult Instagram account and thought that in the country ruled by our religious beliefs he could do any damn thing that he wants. Thanks be to God he is now behind bars.” For us Americans, this is absolutely insane even to fathom. A person has an opinion of how things are being handled yet could face death for merely making such a statement.

I fully understand that certain countries have a different set of rules, but death? Do you know how many death sentences I would have for openly disagreeing with what the government has done over the years, especially this year in regard to the unlawful lockdowns and stay-at-home orders? Heck, we’d all be facing multiple death sentences for the things we’ve said.

They also reported that an Iranian wrestler was hung a few months prior after protesting against regime corruption. Clearly, this isn’t uncommon over there.

After doing some investigative work, I found that out of 179 countries in a group deemed as “free,” Iran was 175th in terms of freedom of speech. That’s pretty crazy to think about. Iran cracks down hard on journalists and media, which are repeatedly targeted.

Their goal is to shut down any group who speaks negatively about the regime or who acts out against them. They also do not allow anyone to get an education if their political views do not align with that of the regime. Ultimately, the regime wants to silence the press and has even opened fire on protestors who wish to make their voices heard.

A slight sidebar, but think about China. They have no social media, and the government tells them whatever they want the people to hear. They are incredibly strict in China, even more so that in Iran. But look at what’s been going on lately here in the United States. The “media” is the one creating the storyline for much of the violence, protests, shootings, and COVID coverage.

Everything you watch or listen to from the media these days is nothing more than doom and gloom. Who do they tell us is here to save humanity? The government – which is laughable at best.

The government can’t even get along between party lines of democrats and republicans, yet they expect us to believe the narrative they are feeding the media? Guess who controls the media? The government. So, what makes you think that we should believe anything the media is telling us?

We all have a right to our opinion and have the ability to speak freely and openly about it. If you ask around, no one agrees with what the government has been doing when it comes to shutdowns and telling us what we can and can’t do. As Americans, we’re free. Yet, the government wants to restrict everything we do and, unfortunately, many are abiding by what they say here of late. Why is everyone all of a sudden sitting down and just taking it?

Can you imagine what would happen if the government started prosecuting Americans for the things we all said, did, or didn’t do regarding COVID? We are now looking at restrictions that do not allow us to move freely from state to state. If I (who lives in PA) wants to see family in a different state, I would need to get a COVID test and show it’s negative within three days of returning just to be allowed back.

Listen, I feel bad for this Iranian bodybuilder. I really do. In fact, I feel bad for every human being on this planet who does not have the right to speak freely about any topic they wish. It seems like a human right everyone should have, regardless of where they live. But I digress.