IS PHIL HEATH FINISHED? WAS HE “GIFTED” 3RD PLACE AT THE OLYMPIA? 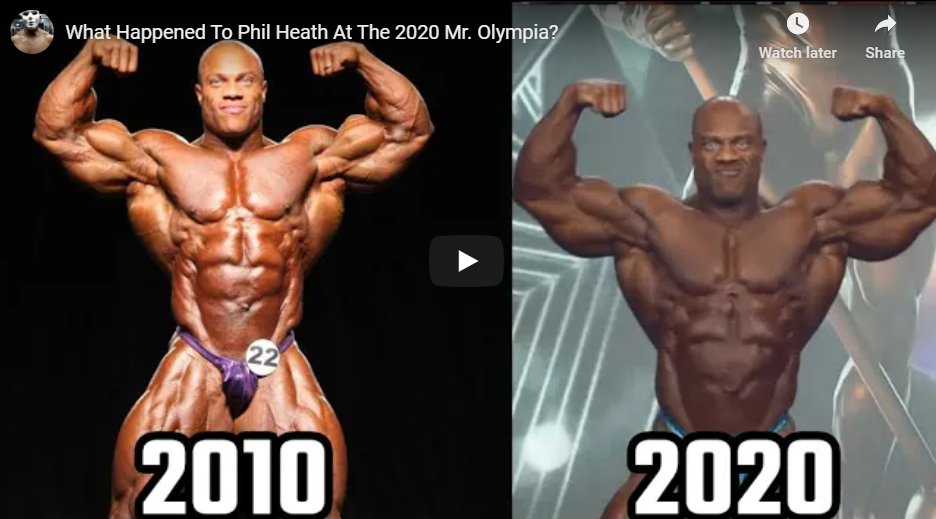 The 2020 Olympia was full of excitement. We had a new location, a new date, the return of Phil Heath, Brandon Curry back to defend his title, and a Big Ramy telling everyone that “Winter is Coming.” What unfolded at the Olympia was nothing short of amazing. Fans cheered from their seats, watch parties online had people posting their excitement, and at the end of the night, we had a new Mr. Olympia champion crowned.

With so much buzz surrounding the return of Phil Heath, the fact that he was working on a documentary with Dany Garcia and her production company, and the lack of progress pics from Phil leading up to the show, everyone had Phil Heath winning his 8th Olympia title as a sure thing – including myself. All Phil had to do was fix his stomach. Just that one thing! But things didn’t play out that way, and many thought Phil was “gifted” a 3rd place finish. Are they right?

Two years ago, Phil Heath took an “L” at the hands of Shawn Rhoden. Little did we know months later, Shawn would be spun up in some rape allegations that would have him miss the next two Olympia competitions, not to mention every IFBB show since. Phil took a year off to fix his hernia issues and watched from the sideline as Brandon Curry took home the Sandow trophy in 2019. There was much speculation of whether or not Phil Heath would even return to the stage after taking that much time off. But he did. The question becomes, “Does he now regret coming back?”

I don’t think there was any doubt in Phil’s mind that he wasn’t going to walk into the 2020 Olympia and tie the record with eight Sandow’s. What we saw during pre-judging, as well as the night show, left many of us questioning if Phil will even come back. It was clear that Phil was nowhere close to his best (actually, far from it), his midsection was NOT fixed, and his conditioning wasn’t anywhere close to many of the other competitors on the stage.

Between poses at the Saturday night show, you could see Phil was physically exhausted. Between poses, he had his hands on his hips, he let his midsection go, and his legs were relaxed. No one else on stage let themselves go the way that Phil Heath did. Personally, I think he WAS “gifted” 3rd place. I think Hadi Choopan had him beat in just about every pose. I looked at the HD photos that were posted, and it’s clear as day that Hadi was on point while Phil did not look like the Phil we were used to seeing on the Olympia stage.

There was so much talk that Brandon Curry didn’t really earn his title because he didn’t beat Phil, well, not only did Brandon bring it and beat Phil this year but so did Big Ramy. So, what does that say about Phil’s physique? The fact of the matter is, Phil is nowhere close to being where he was when he had his winning streak. And as I mentioned, I thought even Hadi beat Phil, which would have pushed Phil back to 4th. I’m not sure what Phil Heath is going to do moving forward, but it could be time to hang up the trunks and focus on his businesses and future. There are even rumors that Phil and his long-time coach split prior to the Olympia, which could be why Phil looked off from what we are used to seeing.

Even Jay Cutler knew when the writing was on the wall that his time was up. Even Dexter Jackson, who held on for many years, decided this was his last Olympia. I’m not so sure that even if Phil came back, he could ever win the Olympia again. Brandon, Hadi, and Ramy would all need to come in off in order for Phil Heath to win #8. Ramy literally dwarfed Phil along with the rest of the lineup and definitively won his first (probably of many) Olympia titles.

You would assume this would be a given, but Phil Heath hasn’t always taken a loss or even criticism very well. When he lost to Shawn, he didn’t believe he truly lost and mentioned that even if his stomach wasn’t on point, the rest of his body was good enough to win. His mentality was that everyone was against him, he’s the villain of the sport, and he thought everyone wanted to see him fall. I guess we can agree to disagree on that point. The judges want to see a complete physique, which he hasn’t brought in his last two appearances.

At the athlete press conference, Phil mentioned that he’s done messing around, and he’s ready to take his title back. He said everything that the people wanted to hear, only he didn’t deliver. Maybe he was still in his acting persona from working on the documentary?

Knowing Phil’s past with YouTubers who called him out and how he reacted following his loss to Shawn, I fully expected to see Phil Heath lose his shit when Bob Chick called his name for 3rd place. Instead, Phil took his medal, held his check, and smiled. To be honest, I was so confused at what I was watching. His reaction made me wonder if the blacked out and thought the next name called was for the winner. But Phil Heath took his placing like a true professional. Granted, I wasn’t backstage or in his hotel room following to see what unfolded, but it seemed like he was okay with the placing. Maybe he knew he was off and was beat?

All Things Must Come to an End

I’ve said it before, and I’ll say it again – I mentioned that if Phil Heath didn’t win this year, he would retire. And right now, I fully believe that. For starters, he has nothing left to prove. Phil will go down in history as one of the greatest bodybuilders to ever step on a competitive stage. For years, his physique was untouchable. But all good things must come to an end, and if he can’t fix his stomach issues as well as his conditioning, no one trains to take 2nd place.

I can’t see Phil accepting the fact that he’ll never win another show or ever be crowned Mr. Olympia ever again with the new blood in the sport and the takeover of guys like Big Ramy, Brandon Curry, and Hadi Choopan. Phil doesn’t need the sport anymore. He’s done it all, proved all his doubters wrong, and can leave the sport with his health and focus on his growing businesses.

While I’d hate to see Phil Heath retire, but the passing of the torch is inevitable in all sports. And it’s time for that torch to get passed onto the next generation of great champions.