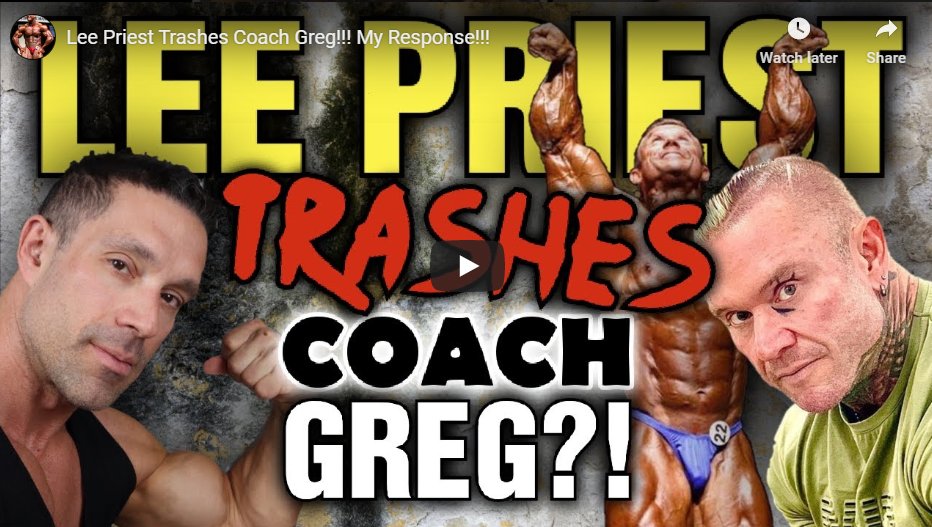 Lee Priest has been pretty angry lately. First, he feuded with Masters Mr. World Robert “Bob” Cicherilo, next he battled with industry leader Generation Iron, and now he’s embroiled in a battle with legendary Canadian bodybuilder Greg Doucette. The issue that’s caused the riff is dirty bulking. Lee, who was considered a top bodybuilder about 10-15 years ago, was well known for ballooning up to nearly 300lbs. He loved his KFC fried chicken, biscuits drizzled in honey, and pretty much anything he could get his hands on. Lee would get humongous, but his logic was, by bulking to these heavy numbers, he’d gain muscle in the process of losing all that fat. The reality is, dirty bulking is, largely, considered broscience, meathead logic, and otherwise totally bunk by most contest prep coaches.

Top natural pro’s, also, highly discourage the tactic because they insist it’s far harder for the drug-free athlete to lose the amounts of fat Lee would gain. Assuming the advice was given to enhanced competitors, there’s still no real science that supports the notion of eating everything in sight for a period after a contest, then dieting hard, to ultimately improve a physique. If anything, such a macro rollercoaster could cause metabolic damage. The fact is, even if a competitor is able to accomplish top honors and major wins in their career, that does not make them authorities in preparing others for the stage. In many ways, by Priest making points relative to gaining muscle and/or to contest prep, even if said strategies worked on himself, he’s opening himself up for criticism. When fans of professional gurus bring these points to them for assessment, they may very well lambaste the source. The fact is, science does not support Lee’s style of dirty bulking, and no one, today, advocates that type of off-season eating, either. Now that being said, maybe Lee didn’t expect his statements to be screenshotted and presented to a guru, but he should’ve known better. That sort of thing is very common in today’s social media world. Whether the person who did it was trolling or whether they sincerely wanted answers, Priest must know that whatever he says, can very well make the rounds.

I know a lot of people think I have it in for Priest & Palumbo, but once again, let me set the record straight. Dave Palumbo gave me my first break. I wrote some really good articles for RxMuscle and went on to write 80 episodes of Muscle In the Morning. I think Dave is a great broadcaster, a great writer, and I recognize he’s an excellent contest prep guru. Some have said his ketogenic diet hasn’t worked for them, a couple have complained of metabolic issues, but overall, he’s helped countless to get nationally qualified, get pro cards, and even helped countless [superstar] lifestyle clients. If Dave advocated a muscle-building theory, I’d have no issue with him doing so. Lee Priest, I also like, but to my knowledge he’s never been a coach and quite frankly, I don’t think he’s qualified to be giving out advice, whether privately – or much less on a program. I, by no means, don’t think he’s stupid or inept when it comes to training and/or even basic bodybuilding diets; however, I don’t think he’s well-versed enough in nutrition to be giving advice on radically unconventional approaches to gaining quality muscle.

Greg Doucette, like a handful of other top gurus, has hundreds of thousands of followers and does daily videos on diet and supplementation. Although he doesn’t accept the accolades, he is widely considered to be a leading authority on SARM’s, SERM’s, and many other research-type chemicals. His videos are extremely scientific and he tends to be very well-read on the topics he discusses. I have yet to watch a video of his, where he comes off as clueless on a subject he tackles. He also seems very prepared in Live settings and roundtable discussions.

If the feud was simply over gaining muscle, that might be one thing, but when Lee Priest trashes Coach Greg, calling him a “poor amateur,” among other things, that kinda talk spreads like wildfire. Lee also held the fact he made Top 6 at the Olympia over Doucette’s head, which indicates that Priest may in fact be intimidated by his much more relevant and educated, Canadian counterpart. Lee pressed on, talking about contest records, perhaps as a litmus test for Greg’s credentials. Doucette quickly unarmed Priest, however, by stating he’s one of the most genetically gifted bodybuilders of all time. That might sound like a mighty-kind compliment, but in reality, what it says is, Priest’s knowledge, or lack thereof, of diet, training, and supplementation didn’t really factor in much, with regards to the physique he built.I still remember one training video where Priest was asked how he built his signature forearms. He hadn’t a clue; in fact, he said he didn’t even really train them. The truth of the matter is, if a top tier athlete grows into a physique, he’s hardly in a position to be talking about muscle-building strategies. If anything, the only real knowledge Priest has, is on getting obese.

Further evidence of Priest’s genetic predisposition to build muscle is, he’s always said drug dealers always hated him because he’d usually buy very little. A guy who didn’t necessarily train his best bodyparts much, if at all, and used very little supplements, had to have been genetically blessed. No one is saying Lee didn’t work hard, but imagine if he didn’t have to work so much to lose all the fat he gained in the off-seasons, but instead, could have worked harder on getting leaner, more dialed in, and really honed in further on his already jaw-dropping posing skills?!?!
The truth of the matter is, maybe he just enjoyed eating bad foods, but to say that that resulted in muscle gain, is absurd. Did it make him stronger? That’s also arguable. There’s really no benefit to getting as heavy as he did.

Greg further debunked Priest’s dirty bulk strategy by pointing out more facts. No matter how much Priest gained in his off-seasons, he always competed at around 200lbs. If dirty bulking really worked, wouldn’t Lee have gained 10, 15, maybe 20lbs of lean muscle over the course of a 20yr career? The fact he didn’t, doesn’t only suggest his dirty bulk strategy was wrong, it pretty proves it.

Lee Priest has a great deal to offer. I’d like to see him bury the hatchet with Bob, Greg, GI, and do more, positive things. I’d love to see him compete again, maybe write an ebook, do seminars, in-store appearances and really get back to the business of bodybuilding. That being said, the opinion that matters the most – is yours – the readers of Iron Magazine. So, I ask you, where do you stand? Whose side are you on: Greg Doucette’s or Lee Priest’s, and why?