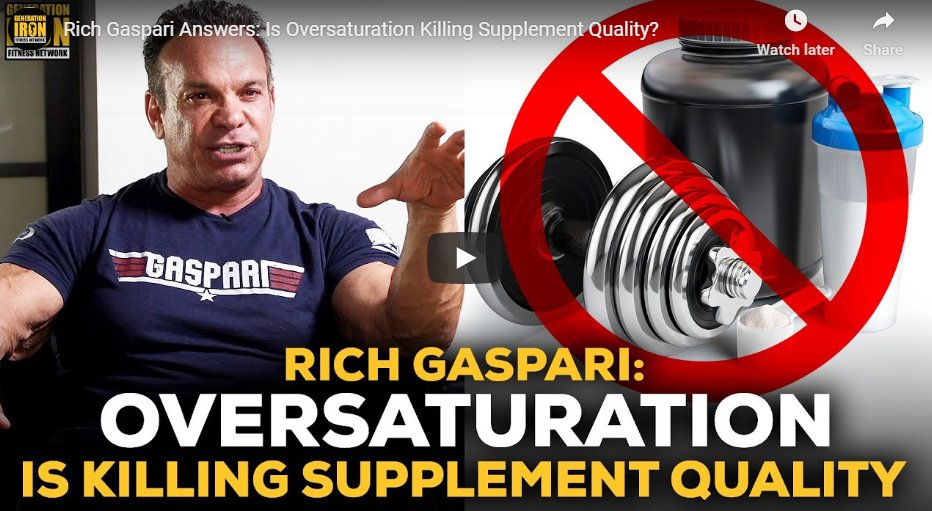 In a recent interview, Rich Gaspari told Generation Iron that he believes supplement quality is going down because there is an over saturation in the market. It’s interesting to hear this coming from Rich Gaspari who owns Gaspari Nutrition because it’s something I’ve been saying for a long time as well. Not only is the supplement quality as a whole going down, but also the margins for all parties involved.

Everyone Is Starting a Supplement Brand These Days

Not to throw anyone under the bus, but even Rich Gaspari mentioned that influencers these days are using their social media muscles to flex and sell their own line of supplements. Are these supplements generally of the highest quality? No, but it’s all about how much influence they have and turning their millions of loyal followers into customers.

If Kim Kardashian came out with a supplement line, you know people would head over and purchase her products. It doesn’t even have to be a high-quality product as most people who would buy her product probably know nothing about ingredients or even supplements in general but trust the influence coming from someone like Kim K.

Rich Gaspari mentioned that while many influencers could get paid some nice royalties or even a paycheck for being sponsored by a supplement brand, they bank on the fact that they have an exponential number of followers who are more loyal to them than anyone is loyal to a supplement brand. So, it only makes sense for them to start their own line of supplements. The same can be said about celebrities.

The downside of this over saturation and where I agree with Rich Gaspari is that many brands are fairy-dusting their products and hiding their deceitfulness behind proprietary blends. Now, side note, I’m actually FOR proprietary blends. I think they stop all the over saturation in the market because people who have some money in their pocket simply goes out and knocks off a brand by using the same ingredients, at the same dosages, and then prices the product lower than their competition, as well as spends more money out-marketing the other brand.

My feeling is that if a brand wants to stand out, they should consider looking into some of the patented ingredients on the market which are put under a microscope in a sense where they are held to a higher standard when compared to a generic ingredient.

A Race to the Bottom?

As much as I don’t agree with such a practice as it hurts the industry as a whole, there seems to be a price war going on between some brands and this is creating a “race to the bottom” effect that (in my opinion) is going to cause many brands to go out of business.

If Product A is a pre-workout and is sitting on the shelf at $21.99, the manufacturer of Product B is going to lower their price to the retailer so it can sit on the shelf at $19.99. This goes back and forth until neither supplement brand is making any money on the product.

Sure, some brands will use one product as a “lost leader” where they are willing to make very little margins on a product just to entice trial or get people to purchase some of their other products while shopping (both at brick and mortar as well as on various e-commerce sites).

If You’re Not Focusing Online, You’ll Slowly Bleed Out and Die

I think it’s fair to say that if people were going to die, they’d want it to be quick, so it’s done and over with rather than suffer and die a slow death. Business is the same way. Rich Gaspari went through some tough times several years ago, to the point where he had to sell his company to Jared Wheat of Hi-Tech Pharmaceuticals.

Now, I don’t know all of the specifics as to why Gaspari Nutrition was failing and why he decided to sell the business to Jared, but after regaining control back from Hi-Tech Pharmaceuticals a few years later, Rich Gaspari is now putting a huge emphasis on growing online.

In the interview, however, Rich Gaspari mentioned that he doesn’t want to give up on his brick and mortar business. I’d have to agree with him that brick and mortar isn’t completely dead, but in the next breath, you need to understand the direction that things are going.

Everyone is shopping online these days. If they can get a product off of Amazon for less than what it is at a physical store, and not have to drive to the store to get it, people will order online all day long. It’s convenient. As a society, we are getting lazier by the day and it’s changing our buying decisions and behaviors. If you want to grow, you must look online.

If you’ve been at this long enough, you’ve seen all of the Gaspari Nutrition ads in the fitness and bodybuilding magazines. In fact, I work with and am good friends with some of the employees who left working for Rich Gaspari and they now have their own businesses and are working with various brands to help their clients grow their business through product innovation and new-age marketing strategies. I’m lucky enough to be used as their copywriter on many projects.

But overall, the game is changing and you either evolve or you die. Many are riding the “transparent label” train for the time being so they can attempt to differentiate their brand from all the others, but I feel that will soon pass as their products get knocked off and they’ll move back to proprietary blends to protect their intellectual property. I mean, why would you want to spend all that time, money, and resources creating a product just to give everyone the “recipe”?

I feel that overall the supplement industry is going to hit a crossroad where they will be forced to make changes. The way things are headed right now, in my opinion, is not the direction that will provide brands with the most growth potential. The big brands need to keep pushing to stomp out some of these smaller brands who want to come in and steal their market share. Likewise, smaller brands need to think outside the box to put a hurtin’ on the big dogs out there.

It’ll be interesting to see where the supplement industry is in 5-10 years. Who will still be in the game? Will Rich Gaspari still be knocking on retailers’ doors or will his model change to e-commerce? Heck, will the brand even be around long enough to see another 5-10 years? I don’t think anyone is safe in the industry right now. Everyone is vulnerable and when you get complacent is when someone will go in for the kill shot to end your business.