RONNIE COLEMAN INTERVIEW WITH VALUETAINMENT WILL HAVE YOU IN TEARS 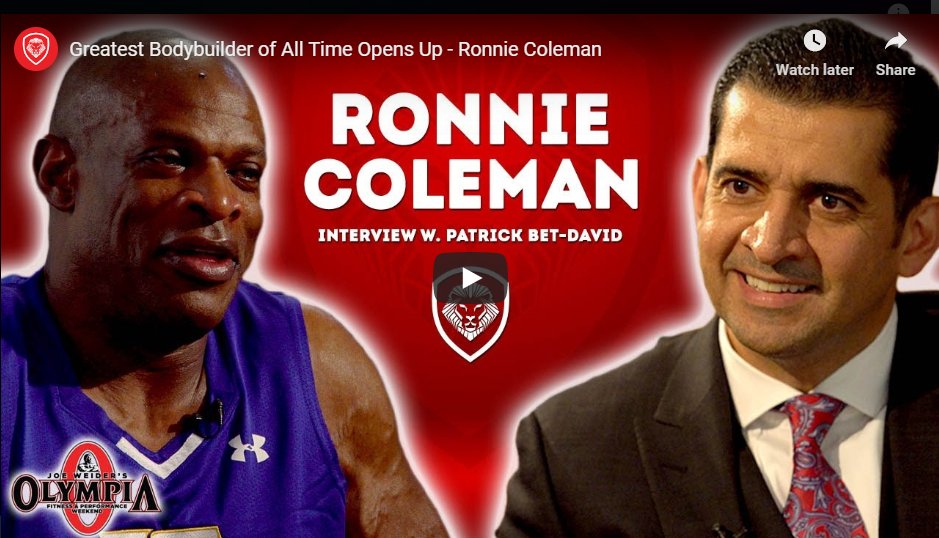 Patrick Bet-David has sat down with some great bodybuilders recently (such as Brandon Curry, Phil Heath, and Dorian Yates) and in his most recent interview, sat down with 8-time Mr. Olympia winner, Ronnie Coleman. Patrick Bet-David runs a very successful business and is also the content creator and brains behind the YouTube channel, Valuetainment. In this Valuetainment interview, Patrick asks some very interesting questions to Ronnie Coleman which some of the answers will have tears rolling down your face from laughing so hard.

I can only speak for myself but anytime I see an interview with Ronnie Coleman, I make a point to put aside some time to watch it – and this interview did not disappoint. Ronnie talked about his time on stage, his time as a police officer, and his current status post all of his surgeries.

When it comes to ranking the top bodybuilders of all time, it’s hard not to have Ronnie Coleman as #1. The man will never be duplicated. Not only was he big, but he brought the conditioning that many feel is missing today in the sport. That was actually one of the things Ronnie laughed about during this interview. When asked the question about how the competitors look today, he chuckled and said, “I don’t see it.” He expanded on that comment and mentioned that none of them look in shape. He went as far as to say that many of them wouldn’t even place in the top 10 back when he was competing.

If you follow Ronnie, you know his sense of humor and that at any moment a gem may come out of his mouth and supply you with a belly-laugh that will make your sides hurt – he never disappoints. I think that’s something that the bodybuilding industry is missing today. No one has really filled the shoes of guys like Ronnie and Jay. Everyone is so serious these days (except for Cedric McMillan who’s hilarious).

The State of the Sport

Ronnie Coleman was actually quite critical when he spoke about the current state of the bodybuilding industry. He said that after Joe Weider passed away it went downhill and that no one has brought the passion for the sport as he did. In a way, I would tend to agree, but on the other hand, I see some guys working hard to help the sport grow and be entertaining.

When asked if someone like The Rock, Arnold, or Dan Solomon could revive the sport, he mentioned it could help grow IF they had the same passion but mentioned the name alone wouldn’t change anything if their passion wasn’t there.

Here’s my take on that statement from Ronnie. I believe Arnold is doing a good job at promoting the Arnold Classic events. Do I see him doing much of anything for the Olympia? No. That being said, The Rock is going to have his own show in 2020 and it will be interesting to see how that all plays out and what his role with the IFBB moving forward may be. Finally, I want to touch on Dan Solomon. I’ve known Dan for years, I’ve written for Digital Muscle when he owned it, and I’ve had him on my Fit Business podcast. He’s a great ambassador for the sport and in 2019 he was handed a lot of adversity leading into the Mr. Olympia competition with all the competitors that weren’t going to compete. He crushed it in 2019 and the show was one of the largest to date with a completely sold-out arena. I think Dan is the right fit for the sport and I think his heart is in the right place.

Patrick Bet-David at the end of his interview with Ronnie Coleman mentioned he would love to get Robin Chang and even Dan Solomon on the show to interview. I sent Patrick a text mentioning I can get him in touch with Dan Solomon if he was interested. At the time of writing this, Patrick had not gotten back to me.

I have a few people that I would like to see on an upcoming Valuetainment interview. Those people would be Arnold, Dexter Jackson, Lee Haney, Flex Wheeler, Lee Priest, and Jay Cutler. I’d also like to see Dan Solomon on the show as well which is someone Patrick already mentioned. So Pat, if you’re reading this, there are a few ideas for you.

Arnold – Honestly, do we even need a reason? He’s one of the greatest bodybuilders and icons of all time. There’s so much they could talk about.

Dexter Jackson – The guy is still out there placing well, is the oldest competitor on stage, and has more wins than any other bodybuilder in history (which I don’t think ANYONE will ever break).

Lee Haney – A great bodybuilder with I’m sure a ton of great stories to share.

Flex Wheeler – From a bodybuilder, to businessman, to losing his leg. There are so many topics that can be discussed in this interview.

Lee Priest – If not for anything else, the man has a ton of stories and is one of the funniest bodybuilders alive.

Jay Cutler – A true champion of a bodybuilder with a great career and then to follow up his time on the stage to building his own supplement line and making some great investment choices. This would be a great interview to talk shop on bodybuilding and business.

Dan Solomon – The topic of the Olympia should be the main focus. Where it was, where it is, and where it’s going would be ideal. Dan has a lot of great ideas and it would be fun to hear some of the things he has up his sleeve in the coming years to build the brand.