RONNIE COLEMAN PUT BODYBUILDING ON HIS BACK: WAS IT WORTH IT? 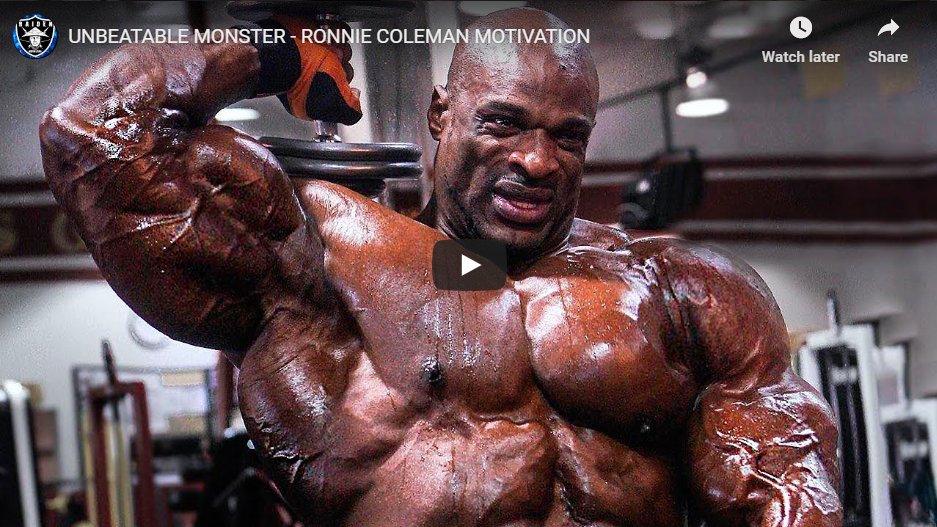 Have you ever watched the old school Ronnie Coleman VHS tapes of his life and workouts? I’m talking about the videos he put out and sold called Unbelievable, On the Road, The Cost of Redemption, and Relentless just to name a few. I remember back when I was just getting into bodybuilding and I would sit on the couch and watch each video one after the other. I’d sit there all day in awe of what Ronnie Coleman was capable of doing and what he was willing to put himself through to the be the best.

If you were to ask Ronnie if the cost of putting bodybuilding on his back was worth it, I’m willing to bet that he would say without a doubt. Ronnie Coleman is a different breed. From balancing bodybuilding with his work as a police officer to pushing his body to the absolute limit, Ronnie was willing to do whatever it took to be the best.

The Cost of Being the Best

With surgeries now in the double digits, Ronnie Coleman has gone under the knife more times in a matter of a few years than an injury-prone person would go through their entire life. But do you know what’s funny about that? He still walks around with a smile on his face while being in constant pain.

Ronnie Coleman literally gave his life and body to the sport of bodybuilding. If that’s not dedication and true passion, I don’t know what is. There aren’t many people who would be willing to get under 800 pounds and squat let alone do it and then live with regret for the rest of your life telling people you bitched out and could have done more reps that it felt easy. I mean, that’s just not normal. If either of us ever completed even just one rep of 800 pounds with strict form on the squat, we’d probably put it in our social media bio so the whole world could see. (LOL)

However, from all the years of brutally beating up his body and breaking it down to the point of multiple surgeries, Ronnie Coleman can only walk maybe 14 feet without needing to stop. To this day he’s still living with constant pain. He has pain in his legs and his feet are numb. To add insult to injury, just about his entire back from top to bottom has been fused and caged, yet he now is having issues with one of the discs (not caged) in his neck that may need surgery. The man can’t catch a break.

Even with all the setbacks, Ronnie has much to be thankful for while trying to fix his broken body. He is happily married with four kids and has his own supplement company that does 8-figure sales every year. It’s hard to be mad about that kind of life.

No Regrets (Well… Just That ONE)

As mentioned above, Ronnie Coleman only had one regret in his career and that was not doing more reps of 800-pounds while squatting. Other than that, he mentioned there really wasn’t anything more he could have done or stone that wasn’t unturned.

If you were to watch interviews of other bodybuilders who were asked about Ronnie, they would all say they can’t believe the condition he is in and they feel sad but know that Ronnie doesn’t play the victim nor has any ill-will towards the sport of bodybuilding. He was willing to go through all the pain in order to be the best in the world.

What’s even more interesting is that, like Arnold, he needs to work out every day. What surprises me is that he’s never opened up his own gym. I can see it being a bodybuilding mecca of sorts and that people from around the globe would travel to see Ronnie’s gym and have the opportunity to train there and take a pic. But then again, I thought the same thing about Arnold and he never opened a gym either.

Even when Ronnie Coleman was a police officer, he didn’t begrudgingly go to work on patrol – he wanted to go. The man didn’t need the money – he had more than enough from sponsorships and winning shows. But for some reason, he loved suiting up and going out to help people.

What makes me laugh is the thought of someone getting pulled over for speeding and up walks this 300+ pound behemoth of a man to your window and asks you if you know why he pulled you over. At that point, I’m sure people just begged him not to hurt them. The man was scary big.

Funny enough, due to his size he mentioned in an interview with Joe Rogan that no one ever messed with him or wanted to pick a fight. He also mentioned he wanted to get in some action but when people saw him everyone would correct themselves pretty quickly (and rightfully so).

There Will NEVER Be Another Ronnie Coleman… EVER

It feels like I’m writing a eulogy of sorts but how do you truly pay the man respect for all he has done for the sport of bodybuilding? There will NEVER be another Ronnie Coleman in bodybuilding. And if there is, he better be a freak and willing to carry the industry on his back like Ronnie did (and still does today).

Ronnie still makes appearances. He still answers emails. He still opens fan mail. Even though he’s been retired for years, the industry is still interacting with Ronnie as if he never left the stage.

Speaking of the stage, there has yet to be a bodybuilder to date that has come close to what Ronnie Coleman brought to the stage. The man was thick, dense, and his muscles had muscles – he was a monster. Yet, the man could talk for days and is hilarious. His personality was very much needed in the bodybuilding industry. Everyone expects to encounter a pompous idiot with muscles who can’t put two sentences together when they meet a bodybuilder, and Ronnie broke that mold when people would meet him.

I’m not sure there will ever be another competitor willing to do and go through what Ronnie Coleman did. Since his retirement, the industry has been missing something. And while Ronnie appreciates the bodybuilders up there on the stage today, you can’t help but wonder if deep down he’s thinking to himself, “What if I gave this thing another shot and show these young pups what an old dog can do?” I won’t keep my hopes up, but I will keep my fingers crossed.