THE INDUSTRY IS BEHIND YOU GREGG VALENTINO! 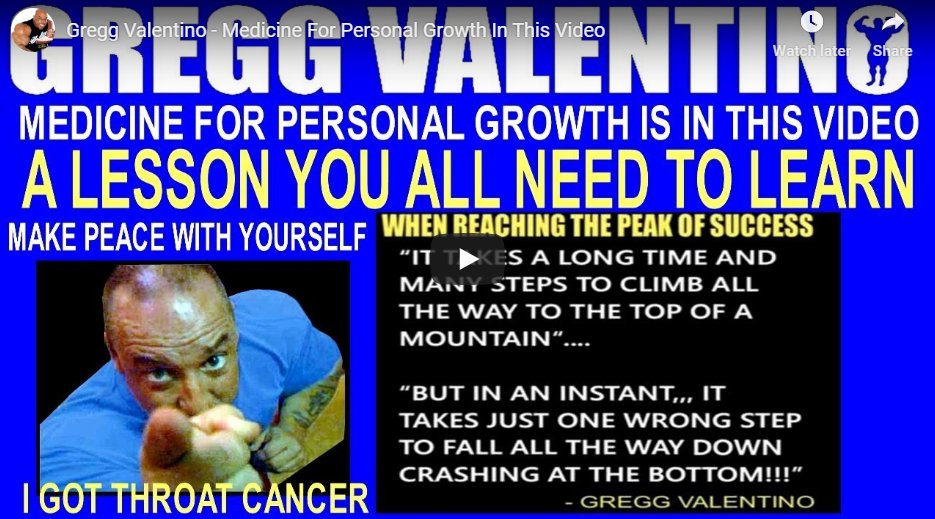 We, here, at Iron Magazine were deeply concerned to hear that one of our former show hosts, Gregg “The Ramblin Freak” Valentino has had some health issues that temporarily sidelined him. We care a great deal about him and had intended on putting out an article, wishing him well, much sooner; however, we wanted to be sure that Gregg underwent surgery and that it was a success, which it was, before putting this article out. While other pages, may have taken the opportunity to get clickbait, our only motivation in putting out this piece, is simply to say, we’re with you Gregg.

Anyone who knows him, knows this guy is a fighter, and nothing is going to stop him. For those of you that may not know of Gregg’s run with IronMag TV, I feel it’s appropriate to educate a bit, especially as we enter The Roaring 20’s and beyond. I would like to take the opportunity to speak to everyone, in general, regardless of age, with regard to health in our industry. I’d also like to speak to ways we can let Gregg know how important he is to us.

When I first approached Gregg about working for IronMag TV, he’d had a rough time and was looking for new opportunities. He’s always been incredibly sought after and revered by his fans. There aren’t a lot of guys in the industry who have spanned various generations, who get the kind of reaction that Gregg does. There’s a few names that come to mind, guys like Ric Drasin, Lee Labrada, and Rich Gaspari to name a few. Jerry Brainum is another one. These guys are used to getting mobbed wherever they go. The fans want to see them, get selfies, autographs, it’s just par for the course. Gregg is most definitely one of these heavy hitters. I mean, look at Luimarco. The guy’s been off of Youtube for 2yrs and now, he’s totally fallen off the map. Everyone forgot about him, because he was just riding a fad. When a guy like Jerry Brainum, or even Gregg Valentino, walks into an expo, it’s pandemonium!! These guys are used to it, but it’s still worth mentioning.

When Gregg was with IronMag TV, his weekly Gregg Valentino LIVE was always our biggest show, that’s why I gave him Monday night. His was always our top show. Absolutely nothing came close. He was and is, the King of New York!! His weekly Momo Mafia episode was a must-watch each week and continues to get hits to this day. He also had Gregg Valentino Uncensored which appeared sporadically under different titles and we were in talks to have him co-host a program called The Momo & The Fox, which featured him alongside rising armwrestling star J.D. Fox. That last show never got off the ground, but we were always brainstorming and talking about future programs and ideas. Gregg was always my go to guy; later it’d be Chris Griffin, briefly, but I could always count on Gregg.

From late 2017 to the late summer of 2018, we dominated the airwaves. We had Gregg, Chris Griffin & Mike Cox (which together are insanely awesome), Theresa Ivancik and several other heavy hitters. We also had some dead weight, folks who just couldn’t hack it and quit, but we were on fire and Gregg was our guy. To date, Gregg’s always been a gentleman and after the break, which was purely business and not personal, he remained so. That’s so important in this industry. Gregg Valentino is a man’s man, total class act.

What’s insanely ironic about his recent health scare, however, is that Gregg has never smoked, never drank alcohol, and doesn’t even drink coffee. At 60 years of age, the guy could pass for 40, but that’s genes, the body, whatever it may be, but that’s life. That’s really the only way you can sum it up – that’s life.

It’s so important to get yourself checked out, often; this is advice I need to practice, myself. Even if you abstain from vices, perform exercise, and eat right, you can still get sick. When I first heard about the growth in Gregg’s throat on Rx Muscle, I was 99% sure it was benign and nothing to be concerned about. Then the next thing I read, is that it actually was something, and I thank God it was detected and removed. I’d like to see Gregg with us for a long, long time. Bodybuilding needs a hero like him around!!

With regards to what we can do for Gregg, there’s plenty. Be sure to support his personal channel, buy his merchandise, and send him as many positive messages of encouragement as possible. Some people just don’t realize how powerful emotional support can be.

I know what you’re thinking, Gregg’s a tank (and he is), but even the toughest, baddest, and most hardcore people, they like to know how much they mean to people. I haven’t spoken to Gregg since the split and I suspect he blames me for it. The truth is, I got the axe a week after him. It was all business. I came back three months later in another role. Now I’m solely a writer, doing ten articles a month. I’m always close to Rob and who knows, maybe in a year, I’ll be in a different role. That’s just how this industry is, but yes, sometimes, it’s easier to make sense out of things if there’s a fall guy. The truth is, I fought for Gregg and I believe in Gregg; I believed in the shows. We had some bums and we had some guys, who in retrospect I wouldn’t have brought on, but guess what, you live and you learn. The bottom line is, I was beyond proud to have pushed to bring Gregg on, beyond proud we were both backed by IML for about 3-6 months of our own shows at MD, and very proud of all the great work we did with IronMag TV.

Be sure to show Gregg your support now, more than ever, because he is a guy who really lives, breathes, and dreams bodybuilding. We’re all behind you, my friend!