THE OLYMPIA RETURNS TO THE LAS VEGAS STRIP! 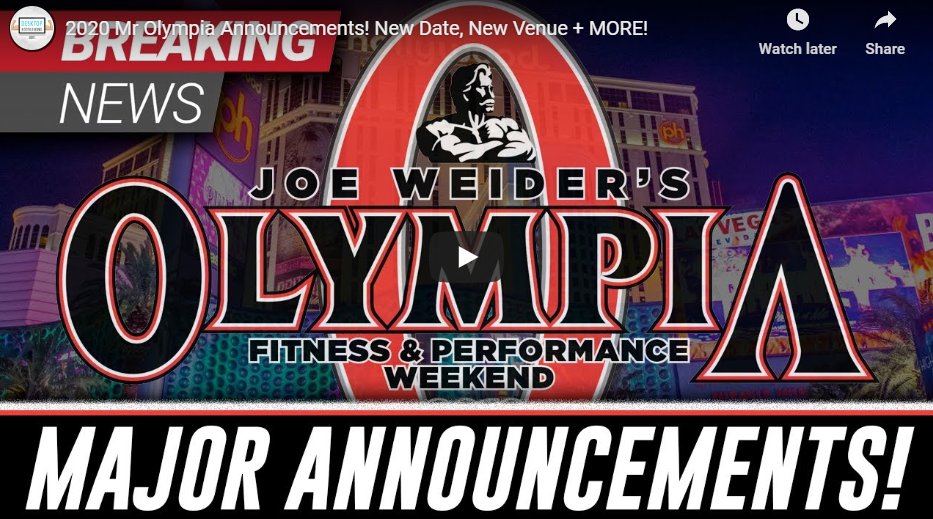 There will be an Olympia Weekend in 2020, but it won’t be like anything before, it’ll be the best of the best!! For starters, the most important contest in physique-based sports will be held in the heart of The Las Vegas Strip, at the Planet Hollywood Resort. The main event productions on Friday and Saturday evenings will take place at Planet Hollywood’s world renowned Zappo’s Theater (located within the resort). Event staff are always mindful of what the fans want and they always listen to feedback. That’s why this year’s event focuses on comfort and convenience, ensuring a truly memorable experience. The event date has also changed to give athletes as much time as possible to prepare for the event. The new dates will be Dec. 16 – 20th. These bold measures needed to be taken in order to ensure the most important contest in bodybuilding and fitness took place.

For weeks, everyone, from athletes to fans to media, has been wondering what the status of the contest would be. This has been a very tough year for everyone, but with countless contests postponing and cancelling, morale in our industry was most definitely affected. Knowing for sure that the crown jewel of physique-based sports will happen, we can now focus on some of the battles to be had at each division. I, along with countless others, am most interested in Open Men’s Bodybuilding, Women’s Bodybuilding, and 212 Bodybuilding. What can I say? I’m ALL about bodybuilding!!

Will Brandon Curry successfully defend his Olympia title? I say, YES!! That being said, he will have his work cut for him. There’s going to be some of the most substantial competition ever before. There are rumors that Phil Heath may return – and – that Kai Greene may return, as well. We read about these rumors often, but now, it’s a little different. In a throwback to when Joe Weider owned the Olympia, we have a real fan in new owner, Jake Wood.

The sale made headline news, but it’s said to have also had an impact on two of the sports greatest, and absent, competitors. If either of these guys made a comeback, the marketing potential would be colossal, from supplements to clothes to tickets sales. The media would have a field day, the message boards would light up, and the old rivalries – reignited, would be something for the history books – providing conversations for generations to come. That being said, while both Phil and Kai have kept a lot of their size, I don’t know that with 2 years and nearly 5 years off the biggest stage in bodybuilding, respectively, that they’d be able to get back to that level in seven months. Again, from a marketing perspective, it’d be liquid gold, but in terms of them realistically winning a Sandow, I’d have to side with reality and say it’s unlikely.

The real competition for Brandon will come from the guys in the trenches, the guys who have been living the lifestyle, battling on stages all over the world, and really gunning for his title. I’m talking about the guys that didn’t quit, who didn’t give up; I’m talking about William “The Conqueror” Bonac, Roelly “The Beast,” Winklaar, Mr. Olympia Dexter “The Blade” Jackson and The Egyptian Phenom, Big Ramy!! I’m also including Hadi Choopan (provided he can get a visa) and 7x 212 Olympia Showdown Champion, The Welsh Dragon, James “Flex” Lewis. These are the main guys that I’m sure are on Brandon’s radar.

There’s also a possibility that 2018 Mr. Olympia Shawn “Flexatron” Rhoden will return, but I think it’s more likely we’ll see him in 2021. Another possibility is that 4x Mr. Olympia Jay Cutler will come back out of retirement. I would be utterly shocked if that were the case, but Dan Solomon did say, “there could be as many as 4 Mr. Olympias,” on stage, so the numbers have to add up somehow, right? The beauty is, there is a ceiling to how many people he could, realistically, be referring to.

In addition to the aforementioned guys, there’s some real threats on the horizon. You have Patrick Moore, Akim Williams, Maxx Charles and an incredibly dangerous guy in Steve Kuclo. There’s also talk of Evan Centopani hitting the NY Pro stage, so if he wins there, what does he bring to Vegas? Another guy, and someone I really like, is Nathan DeAsha – he’s a factor in any contest, as well as Sergio Oliva. The one guy with ZERO flaws and who has Top 6 written all over him is Lionel Beyeke.

There’s a lot of talent in Open Bodybuilding!! There’s some really dangerous guys out there. What could someone like Cedric McMillan do at 100%? Back in the day, Cedric at 100% nearly beat Kai Greene at 100%, both in their prime. My point is, while comebacks mean big returns, I’d don’t know that realistically those guys jump ahead of all these active warriors in line. They could always try, though, it’ll just be all out battle!! It’ll be epic!!

Speaking of epic, everyone who attends the 2020 Olympia Weekend and/or watches it online, will be witnessing history, as Women’s Bodybuilding returns to the crown jewel of physique-based sports. It’s also key to point out HOW this division is returning. It’s not merely returning as added value, it’s coming back triumphant!!

What Wings Of Strength has done over the course of half a decade through its Rising Phoenix events, including the very impressive World Championships, has shown what can be done with this fantastic division. Knowing your product and knowing your audience are two key ingredients in achieving mega success!! Back in the day, when WBB was removed from the Ms. International and later from the Olympia stage, the folks then thought the people didn’t love muscular women, that there was no demand for them, yet whenever you’d go to an expo (anywhere in the world), booths that featured muscular women, had lines around the block, waiting patiently in line. Again, it’s all about knowing your product and knowing your audience. WOS was the game-changer and its owner, Jake Wood, brought about a renaissance in the division.

We all knew something special was happening when Dan Solomon sold Digital Muscle and became Chief Olympia Officer. Suddenly, things that seemed impossible, were not only conceivable, but they were happening! When news broke that AMI sold the Oympia to Jake, that was an even bigger game-changer. Whenever you have someone who knows the sport, knows the audience, and loves everything involved, you’re going to have a much better – EVERYTHING! Whether it’s a contest, a brand, a general vibe, everything will be 10x better and that’s exactly what’s happened. The guy who made Women’s Bodybuilding a headliner event again, is now the owner of the whole contest. WBB returns and will most definitely get the accolades and respect it so very much deserves.

What’s also very significant about the return of Female Bodybuilding is the fact you will have two eras on the same stage. You have ladies that battled and prospered during the WOS run, but you may also see a substantial number of women from the days before the division was removed from the Arnold and Olympia stages.

We all know that age is such a number and as far as the men go, there’s guys like Dexter Jackson and Kamal Elgargni who are extremely competitive well into their late 40’s; however, the women are starkly different. Whereas some men are competitive as they age, I’d say most women get BETTER with age. I think there’s a pretty big number of women in their late 40’s and 50’s who could give ladies 10, 15, even 20 years their junior, a very real run for their money. What makes things even more interesting, is the fact that some ladies who may have retired, may have had a few years of pure rest. Who’s to say if they got back to the eating, training, massage therapies and posing, that they may, in fact, look better than in their prior heydays. That fact, alone, is enough to keep the current best awake at night!

With regards to 212 Bodybuilding the level of competitiveness is equally jaw-dropping. Defending Champion Kamal Elgargni, The Lion of Libya, will be defending his title against a pack of fiercely competitive contenders. Much like the open, I could be here all day shouting out names. There’s a much-talked about, possible comeback from The Boston Mass, Jose Raymond, there’s the undeniable force that is Shaun “The Giant Killer” Clarida, and veteran champions in Correa, Ashkanani, and Henry. There’s John Jewett, Derek Lunsford, and Guy Cisternino. There’s 2017 212 Arnold Classic Champion Charles “Tank” Dixon who mustn’t ever be overlooked.

The 212 is a division that’s packed full of great competitors and a sea of silent threats. Just look at what happened last year with the media blackout. You had every single media outlet focused on one competitor, giving a few others some (but not much) love, but the guy who won, got zero press leading into the event.

I’m a bodybuilding fan, but there’s also six other divisions, seven in total, in addition to bodybuilding. There’s something for everyone!!

I am so beyond-words-excited that I can barely sit still. What’s crazy, is that it’s just May 11th, and this event won’t happen for another seven months. The level of excitement, the buzz, and the overall anticipation will make this event the biggest of all time. And the fact that it’s being held as far out as possible, should give everyone the confidence to buy tickets and reserve rooms. It’s also great news for the athletes, giving them all the tools in their arsenal to get ready. With the event in mid December, every athlete will be able to squat, deadlift, and bench press. They will have access to quality gyms and not have to rely on broomsticks, elastic bands, and bags of sand to train with.