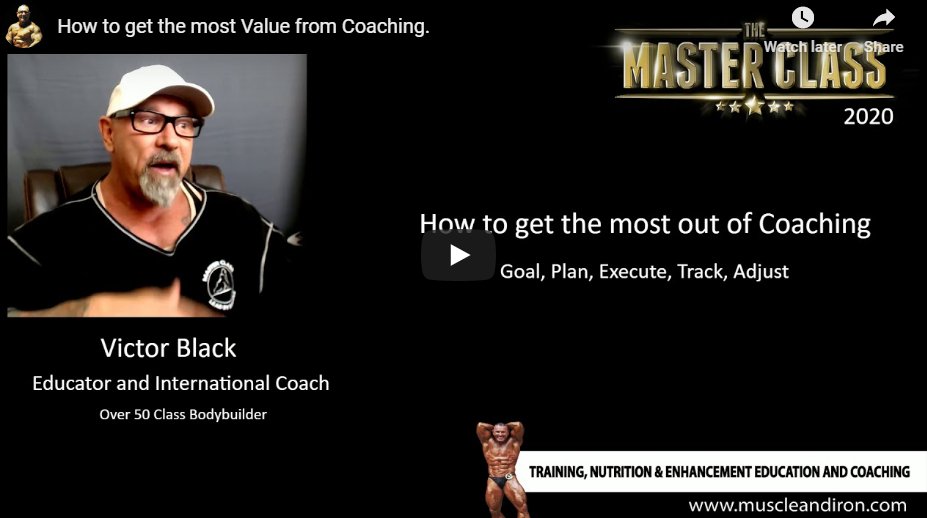 Oh, what a tangled web we weave. The Internet, aka the World Wide Web, contains at least 6.23 billion pages, with millions of them focusing on bodybuilding and fitness. We could narrow this down, while dialing in on performance enhancing supplements and drugs, and the content would still have a page count in the millions. The content on the Internet is vast to say the least, and it is very easy to get tangled in everything the Internet has to offer if you aren’t careful.

The countless number of bodybuilding blogs are often copy and pasted from another blog or website. Many times, the blogger will change the wording up a bit in an attempt to appear somewhat original. This can become problematic. Let’s just assume that the original content that was copied or referenced was in fact correct. Then we have a blogger that decides to copy this information, while changing it to make it appear that he is the original author. With this scenario, we are relying on this individual’s ability to comprehend and relay the information in a way that it still remains correct.

There is a popular international childrens game called Chinese Whispers, where players form a line. The first person in line whispers a message to the second person. The second person whispers to the third person, and so on, until it reaches the last person. The original message is then compared to the final version. By no surprise, there is always a large descrepancy between the first and final message. This is kind of how things are with the Internet these days. Facts get passed around time and time again, until they are no longer facts. Information regarding anabolic steroids and other performance enhancing drugs has become so twisted, it is difficult to trust anything you see or hear today. The thing is, many people believe everything they see and hear, even if it comes from a YouTube video. The saying, if its on the Internet, it must be true, seemed to have started as a joke. People often dont take it as a joke, and rely on everything they see on YouTube. For example, I came across a self-proclaimed, 21 year old SARM expert on YouTube recently. He posted a video regarding SARMs, side effects, and indicators when doing blood work. This individual was so far off base with his claims, it was hard to believe that this is where PED users are turning for their information. The icing on the cake was that there were roughly 12k subscribers to this person’s YouTube channel. So in other words, there are over 12k people that are using very misguided information to rely on while they are using performance enhancing drugs. This is just one example of countless blogs, YouTube channels, and forums that put out the same type of content. The blind leading the blind, with no scientific data to back up their claims. I have zero respect for this type of misguided information that is careless and potentially dangerous. However, I do have respect for individuals that are meticulous with their research before publishing content, and one of the few people that are actually digging deep into scientific data regarding anabolic steroids and other performance enhancing drugs is Victor Black.

I recently became familiar with Victor after reading some of his social media posts regarding PEID use. At first glance, I thought big deal, another person copying and pasting a PubMed article. After looking closer, I noticed Victor was really digging deep and using legitimate studies to piece together and graph out information with how people responded to performance enhancing drugs. I have done plenty of research, and I was coming across data in his posts I had never seen before. It is then that I realized that this guy is doing something right, and he is someone I needed to talk to. One thing I have noticed consistently through Victor Black’s segments is that he seems to have a neutral stance on performance enhancing drug use. He doesn’t push them as the end all, be all of bodybuilding, and he never downplays the counsequences that come from using these drugs. He seems to have an agenda to inform the reader or listener on what to expect; the good, the bad, and the ugly. After several messages back and forth on social media, we decided to set up a Skype call. After all, one of the reasons I wanted to put this article together was to pick his brain.

Josh Hodnik: Victor, would you please tell us about your training background, and how that transcended to where you are today?

Victor Black: At 52 years old, I compete as an Over 50 Grandmaster Class Bodybuiler. I began training 34 years ago, and I really began researching anabolic steroids and other performance enhancing drugs in depth at about the age of 40.

Josh Hodnik: A lot has changed in this world in the last 34 years when you began training. How has PEID use changed during this time?

Victor Black: In 1970, PED discussion was really restricted to 10 or 12 anabolic and androgenic steroids. In 2020, there are literally 100’s of different compounds in dozens of different classes that might be considered for building the Super Natural Human.

Ranging from AAS to SARMs, from Recombinant Growth Hormone to Secretagogues, from Glucose Disposal Agents and Sensitizers to Human Insulin Analogs, from Peptides to Chemical Uncouplers, there are literally so many potential PIEDs that it is both truly overwhelming for novices and the amount of “Bro Science” in the domain of Performance and Image Enhancing Drugs is at unprecedented levels in our tribe.

Josh Hodnik: As you metioned, there’s an almost endless variety of PED’s available today, which most are easy to obtain with the Internet. Do you believe that this is the catalyst behind PED’s being misused and abused with little regard to health consequences today?

Victor Black: History has shown us that people have always seeked the magic pill, and have been risk takers in their pursuit to be anything but average. DNP was used extensively in diet pills in the 1930’s after a Stanford University reported of it’s metabolic boosting ability. Then there was the Goldman’s Dilemma, which surveyed athletes in the 80s and 90s, and showed a staggering number of them would take a pill that guaranteed success, even if it meant an early death. So, the risk taking person has always been there, you just now have drugs that were once only available to certain bodybuilders and athletes, that are now available to the masses.
Josh Hodnik: The research that you do is very time consuming. What drives you to do this day in and day out?

Victor Black: My educational background is in Engineering and not Biochenmsitry. But the data is out there if someone looks deep enough. Its not like it was years ago when Dan Duchaine was reading through medical books at a University library. It comes down to being able to comprehend and translate data, which my engineering background has helped me with. There is an unmet need in our community that led me to pursue the educational aspect of PEID use.

Josh Hodnik: For the readers that may not be familiar with what it is you do or who you are, what would you their take away from this be?

Victor Black: I am passionate about helping men and women that are interested in better understanding the great, the good, the bad and the ugly of PEID use and believes in evidence based practice, where anecdotal, observation, and experience are equally as valued as the clinical evidence and the clients personal choices.

Victor is one voice in a market overwhelmed by noise that is worthy of listening to.

He is actively seeking to find the balance between the practical user application of PIED’s and understanding what we can learn and apply from the Clinical Evidence toward our “safer use” of these compounds.

Here are 3 tips from Victor for safer use

*Start by separating Compounds into Basal (or Daily Use) PEDs and Situational Use PEDs.

Examples of Situation PED Use might include the final weeks leading into Competition or breaking through a Plateau. Where we might be able to justify adopting a higher level of risk for a short duration of time but we don’t really want to live in this state of escalated risk over a long time frame.

**As a general rule of thumb, we would place only drugs that have been approved for Human Use into the Basal or Daily Use PED Class. These are the compounds that we are going to be living with over the majority of our enhanced career.

Research Chemicals and Veterinary Drugs, then really by default, become Situational Use PED’s, meaning not so much as we should never use them, as we should use them sparingly or under certain specific conditions over greatly reduced time frames weeks not months and most definitely not years of exposure.

Understand that unapproved, untested Research Chemicals and Experimental Drug Candidates carry a greater plausible risk to you not a lesser one. This misunderstanding has reached almost epidemic levels today driven exclusively by the marketing of those that sell these drugs.
Today as a result we have people that truly believe that a drug never even tested in a Rat Model is “safer to use” than a Drug that has been in Human Clinical Use for 60 years with 100’s of Clinical Trials on its safety and efficacy for us to consider.

Just understanding this simple fact has the potential of lower your risk profile significantly, most people today don’t understand that a drug developed and then evaluated for Human Use and subsequently abandoned, was abandoned for a reason, usually either efficacy or safety or toxicity profiling, or on some occasions both.

There are drugs like Yk-11 that have never even been tested in a Rat Model and Drugs like GW1516 abandoned by the developers because it failed standardized toxicity testing. Few people even understand the facts here. I have lost count of the guys that believe GW1516 failed some massive escalation of dosage testing over unreasonable timeframes. Incorrect, it failed standardized toxicity testing the dosage and duration of exposure as was “required” to move forward in the approvals process and it failed and so it was abandoned by the developers.

Even that does not mean you should never use GW1516 or YK-11, just go in “eyes wide open” understanding this defines higher risk drug use not lower risk than Drugs in Human Clinical Use.

***Finally consider using dosages that are “close” to those used at clinical levels, many are surprised by the latitude this allows us, giving us reasonable data to consider from Clinical Use and Trials.

As a general rule of thumb, I always use less than dosages for the Clinical Trial data we have. Some examples here are:

Anavar
Trial Data at 80mg and 150mg a day ( 200mg a day but limited data to review, just a paragraph or two )
Clinically deployed at 20 mg a day

Metformin
Clinically deployed at up to 2000mg a day

In an industry where a PEID guru pops up too often to keep count, I can say without doubt that Victor Black is the real deal. We have relied too much on opinion based concepts, and Victor relies solely on data backed concepts. This alone will make Victor Black an asset to the informational and educational side of PEID use.

Victor can be reached for online coaching and advice at: www.victorblackmasterclass.com