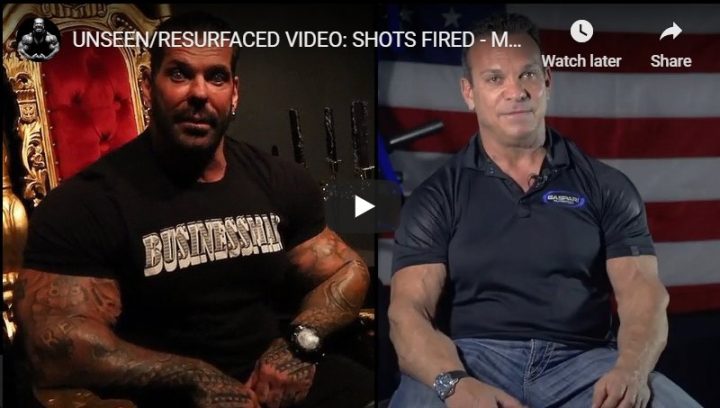 It’s been three years now since the industry lost Rich Piana, yet his name continues to come up in a negative light. Most recently, a video surfaced on the Rich Piana YouTube channel that was posted to discredit Rich Gaspari. While I haven’t seen confirmation that it was 5% Nutrition who posted it, whoever is in control of his YouTube channel needs to do several things in my mind.

Let’s first touch on the video itself. The video was done in response to Rich Gaspari mentioning in Generation Iron 2 that he doesn’t like Rich Piana and thinks he’s bad for the industry. There are people on both sides of that debate, but it’s neither here nor there anymore as the man has passed away.

In the posted video, Rich Piana is clearly angry at the comments from Gaspari but didn’t go completely off the deep end with what he said in his rebuttal. That all being said, Rich Piana didn’t post the video for a reason. What that reason is? We’ll never know. But whoever is in control of the Rich Piana YouTube channel made the video live for everyone to see.

I have so many issues with what has transpired that I’m going to chime in with my two cents and discuss what I feel needs to take place.

What Should Happen Now?

As I mentioned, the stuff I’ve been seeing in the industry regarding Rich Piana is disturbing. The man is dead, yet people are either trying to monetize from his passing, sell his belongings while saying they never got any money after he passed, or put the man on blast for something he did in his past. Here’s what needs to happen next.

Note: Your thoughts could be different from mine and that’s ok – these are my opinions of what I feel would be the right thing to do.

To my knowledge, Rich Piana has never mentioned what will happen to his personal YouTube channel in the event of his death. That would mean, the channel would be live but dormant in the sense that there will be no new videos or content being posted. That, however, has not been the case.

Someone has been posting videos on his page and being that Rich monetized his channel, money from ad revenue would be deposited monthly into a bank account. Who has that account now? Who knows? Does his ex-wife have it? Does 5% Nutrition have it? Does his girlfriend at the time of his death have it? Who’s making money off of Rich Piana’s YouTube channel?

I feel as if the channel should be handed over to the family and that if they decide to put together videos and tributes of their son, they should have the right to do that – but no one else.

If 5% Nutrition is behind the channel and they are making money off of this and putting out dirty laundry that Rich Piana never wanted to post or he would have done so himself, there needs to be consequences. Somewhere in YouTube’s guidelines, there has to be something that you cannot post content if you are either not the creator or do not have consent or the right to do so.

Include Rich’s Family in ALL Profits

I was watching Dave Palumbo’s response to all of this and I agree with a point he brought up in his comments where he mentioned Rich’s family should get all of the money from his hard work. While I wouldn’t say ALL the money, I do feel they should be entitled to profits.

Rich’s earnings from YouTube should 100% be going to the family. That was Rich’s platform and a place he could talk about anything and everything. He was documenting his life and for 5% Nutrition to possibly be benefiting financially from it right now does not sit well with me if that is what’s happening.

The family of Rich Piana should also be getting portions of the profits from 5% Nutrition. If I were to die today, I’d want my hard work and earnings to go to my family to make sure they are taken care of. I don’t believe that is the case at all with 5% Nutrition – I don’t think they are helping out the family in any manner. To me, that’s wrong.

If I die, I want my passive income and money from my businesses to go directly to my family. It’s MY blood, sweat, and tears invested into those income streams. Why should someone else be in control and take those away from his family?

My parents always told me growing up that if I didn’t have anything nice to say, don’t say anything at all. They also told me that I shouldn’t say anything that I wouldn’t be willing to say directly to the face of someone and accept the consequences.

I’ve watched several interviews over the years of people talking about their relationship with Rich Piana and how there were things going on behind the scenes that out of respect, I’m not even going to mention in this article. None the less, they were pretty damaging to his character – regardless if they were true or not.

Why can’t people simply let Rich Piana rest in peace? What benefit at this point do they get from bringing up dirt on someone who has died three years ago? If they need an ego boost that bad, they have even bigger problems if talking smack about a dead person is their way of feeling better about themselves.

Personally, I wasn’t the biggest fan of Rich Piana and I was vocal in the fact that I didn’t agree with everything he was doing. And if given the chance, I would have sat down with him and explained my position. That being said, Rich’s name doesn’t come out of my mouth in a negative way today. What would the point or purpose be at this stage?

I’m saddened by what happened to Rich. He was taken way too soon. I feel for his entire family and those who were extremely close to him. I simply wish people would leave the man alone and let him rest. If you wouldn’t want people talking bad about you after you pass away, then don’t do it to Rich.