WILL GNC SURVIVE AS A BRICK & MORTAR CHAIN? 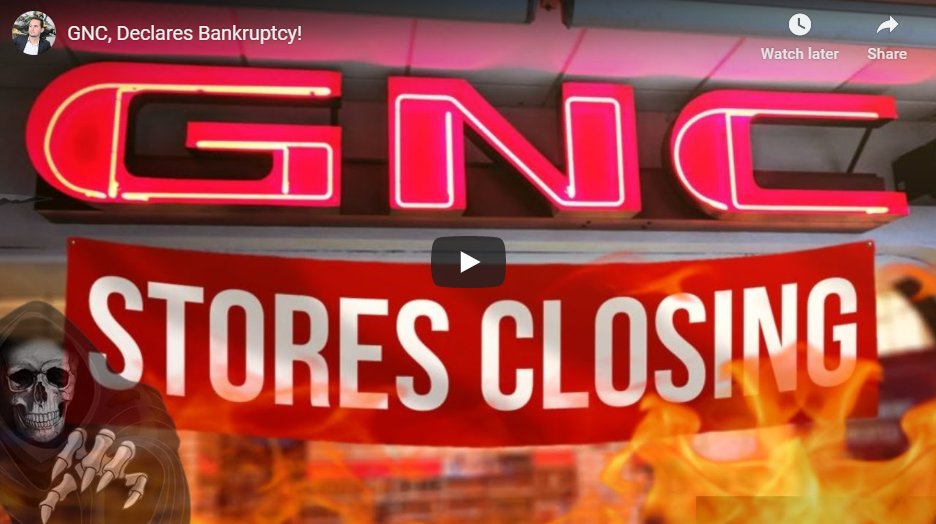 Let’s cut right to the chase as opposed to spending half an article trying to rearrange the deck chairs on the Titanic. When it comes to business, change is inevitable. You either evolve or you get left behind. Sometimes companies, particularly large ones, can defy changing times and keep it business as usual for the indefinite future. This is a way of maintaining an internal status quo, while ignoring the larger one at play in the marketplace. There’s a variety of reasons why this might be more suitable than scrapping old ways of doing things instead of teaching an old dog new tricks.

When it comes to vitamin retailers, GNC is the king, they’re the biggest, they’re the ones with the deepest pockets, and at one point in time, they were so big they made their way into mainstream America, as well.

They’ve always been mainstream with regards to having storefronts as standalones, in plazas, and in busy malls, but at one point they had a deal where they were inside thousands of Rite Aid drugstores; it’s like you had your very own mini GNC outlet within a separate store. That’s big leagues!! The problem, however, is that GNC didn’t see the bigger picture. When the internet hit, online shopping was very limited. When megasites like Bodybuilding.com and the like started to corner a substantial corner of the market, GNC counted its losses and continued on.

As the mega online stores and mega distributors (e.g. Europa) started to see their own models having to change due to the ever-changing market, GNC stayed on course (its course). Finally, as Walmart got more into the supplement game, carrying many of the brands that could only be found at GNC and it’s competitors (Vitamin World, Vitamin Shoppe), GNC still kept doing things as they’d always done them. The fact is, nothing at GNC has changed. Their store model, their promotions, and their way of doing business has remained, largely, the same since the day they started. Their size has let them defy reality, but now, having to make the tough call of closing 1,200 of their 4,000 stores, speculation will run rampant. Will restructuring as a result of filing bankruptcy protection be enough? Or is this simply the beginning of the end?

Consistency is great, but not at the price of being outdated. The GNC store model is tired, it’s old. For starters, the amount of inventory is excessive, the layout makes it as to where almost every inch of the store is filled, and the general vibe is one of clutter. There’s no empty space, there’s no imagination, everything is done to sell, to promote supplements, and to inundate the senses with the various products, claims, and hype. Every aisle and every shelf looks the same because corporate makes sure that each store is consistent. Just about the only thing in a GNC that has any uniqueness, is the register area. The fact everything is always the same, turns a lot of people off too. Also, customers can’t request brands, they can only buy from the companies GNC deems fit. As opposed to courting businesses, GNC puts a world of requirements on businesses that want to sell on their shelves. Most companies don’t even see the benefit to selling in brick and mortar stores, they hate the return policies which often make them lose money, but if that weren’t enough, they have no interest in jumping through all the hoops and getting through all the red tape, when they can sell direct and make more money.

There used to be substantial bragging rights if a company had products on sale at GNC. Similarly, companies used to have a certain level of credibility if they had ads out in all the major magazines. Times have changed. Today, no one buys magazines and it seems, very few people care to shop at physical stores. Whether it’s GNC, one of their large competitors, or even small franchise supplement stores, you’ll be hard pressed to walk into one of these locations, in any state, and find more than 2-3 people on a random day, at any given time. In fact, you’re lucky to find one other person besides yourself. That’s because people, today, value convenience.

What’s easier? Setting aside free time, getting in your car, using up fuel, driving and parking, just to walk into a store and buy protein, then walk back to your car, drive, use fuel, and take more time to travel home – or – buy online?

You could do all that – or – you could go to a website, place your order, pay nominal shipping (or no shipping if you order enough) and do it all from your phone. It’s a no-brainer. And the more people who order online, means the less people who visit stores. Now, look at it from the store’s side. They have to either buy stores or rent them, they have to pay manpower, and they have to keep shelves stocked. If products are six months out from expiration, for example, the store marks them down as much as 40% (to start) and lower as that date approaches. That’s a loss and there are many losses because a lot of the brands that appear, don’t actually sell. Some don’t sell because consumers can get them cheaper online, but some don’t sell because there’s just no demand for them.

If you as the owner (franchisee) or as a general manager see that an entire shelf of products doesn’t sell, you can’t just sell off what you have and order something different next month. It doesn’t work that way. If you’re a GNC, you pay franchise fees and you follow the corporate model. If you think the fine print isn’t enforced, you better think again. Beyond the losses on the sales side and the cost of doing business, many new, potential franchisees, are opting to work with cheaper franchisors. At the end of the day, the few new business owners in this market simply don’t see the curbside appeal of being associated with GNC – it’s not worth the time or money to them. Further, a great many would rather try their on their own. In the end, opening a supplement store is becoming as daunting as opening a gym. Can you make money? Can you be that one exception to the rule? Of course you can, but understand that the odds are stacked against you. And also understand, there are a lot easier ways to make money!!

GNC could switch it up, but they haven’t, and they probably won’t. The truth is, Gold Card savings no longer make people rush to the stores for the first week of the month. People can get better savings than that at Walmart and they don’t need to buy a card, join a program, or limit their purchases to any set days or times each month. What is this 2010? We’re in a whole new world. No one gets excited about stuff like that anymore.

Also, those hard plastic cases … loss prevention or not, they look so silly. Some stores don’t even have the boxes for LP, they simply like to use them to keep the really powerful stuff out of reach. C’mon guys, you’re a GNC, you don’t have anything powerful. No one goes to GNC to buy gray area supps. If anything they go there to buy protein and pre workout powder. Maybe a million years ago when you had the Pinnacle Poppers or the original Jack3d 3d pre workout, but nowadays, you guys only carry goody two shoes supps, so don’t act like you’re carrying anything exotic. Also, the prices.. even if you don’t carry anything that’s actually strong, it seems you never got the memo to lower your prices.

I was recently at a GNC in Kentucky, where you guys had the audacity to charge nearly $150 for a bottle of pills (in the glass case under lock and key,of course). That’s ridiculous!! Who in the hell is going to spend $150 on any supplement today? I’m sorry, but it’s gimmicks like that, that turn a lot of people away.

If GNC changes its model, got a lot more hip with the times, lowered their insanely high bar for businesses to want to work with them and perhaps reexamined their pricing, then maybe something could be done. That being said, the same thing that let them get this far without changing, their size, may also be what prevents them from changing today.

GNC isn’t just a company, it’s very much an empire. Even after closing 1,200 stores, you still have well over 3,000 locations. It’s one thing to keep everything normal, but to effectuate any kind of real, across the board, change, that might be a lot more ambitious than meets the eye. Still, I do think if the company diversified its reach, invests more into online sales, maybe streamlines its brick & mortar model, and revamps its corporate culture, i do think GNC could experience a renaissance. The brand name is worth liquid gold and it’s very much a part of our culture. The question is, what will it do now that it’s bought itself some time?