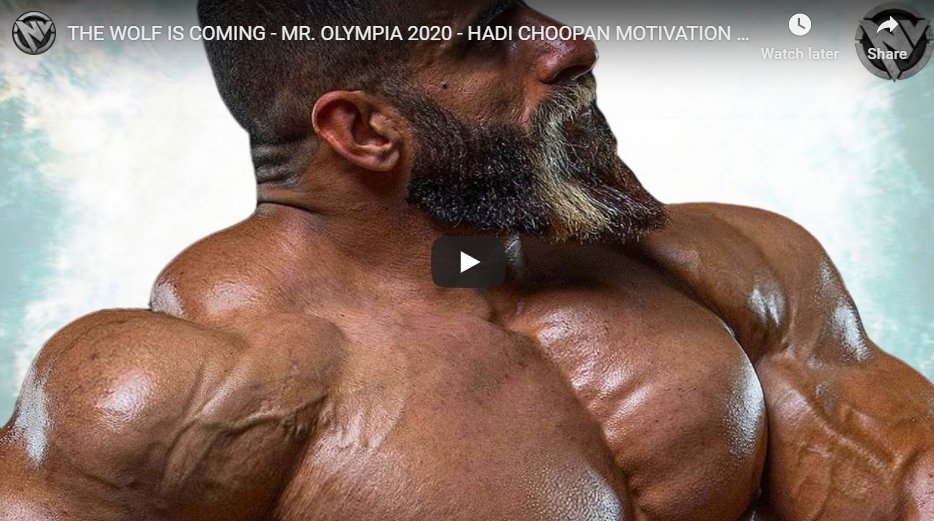 Last year, one of the most talked about guys competing at the Olympia, was none other than Iran’s Hadi Choopan. Everyone from the fans to the media, were consumed with speculation. Would Hadi compete, would he get a visa, and what division would he compete in?

The 212 sensation was always said to be the one man who could stop James “Flex” Lewis, but we’ve read similar stories about guys like Eduardo Correa, David Henry, and Ashkanani and several other heavy hitters. Whether or not Hadi could do it or not, was at most speculative, because Lewis wasn’t competing in 2019. That being said, we all know that at the Olympia, bodybuilders must pick one of two bodybuilding divisions and Hadi picked the Open. It was really history in the making as the Iranian legend not only brought one of the best conditioned physiques to the stage, but he cracked the Top 3.

Do I think Hadi beat Brandon? I’d say no way. Do I think he beat Bonac? I think a case could be made for it, but do I think he did? No. In reality, Hadi had a spectacular outing and was worthy of every last accolade received. The big question for Choopan, relative to 2020, is whether or not he’d be able to stay consistent, working towards the 2020 Olympia. With this competitor, there’s also a bigger picture, and that deals with U.S.- Iranian relations.

Few, if any, competitors have to worry about a dynamic quite like this. The only other country with relations as tense with America as Iran, would be North Korea. In fact, American-Iranian relations might be even more tense!! President Trump has visited North Korea, even if only a few feet into its territory, but he has never set foot in Iran. That is a very important distinction. On top of all that, there’s also the question of the Olympia changing dates and Covid 19. Who would have thought the Olympia would be a week before Christmas in 2020?

With regards to consistency, I figured that as long as Hadi stayed with Hany Rambod, he would be in good shape – literally! Now that Hany is less occupied with 7x Mr. Olympia Phil Heath and other big names on his Evogen line, it seems most of his attention is focused on Choopan. I have seen a number of IG Lives between them over the course of 2020 and these videos always show Hadi right where he needs to be. He’s in the gym, no distractions, with workout partners who know what time it is. One of the advantages of training internationally, is that champions don’t have all the temptations they have in Europe or Stateside. Life revolves around bodybuilding, from the nutrition to the training and the mental focus. After all, to a great many people Hadi could have won the Olympia.

It’s one thing to be Top 10, Top 6, or even Top 5, but to be amongst the Top 3, that’s greatness. Hadi was in 2019, where Roelly Winklaar had been in 2018. He got the same placing and he was also voted The People’s Champion. When he came to America, he was a great bodybuilder with a lot of hype; when he got off the Olympia stage, he walked the walk, he justified all the support that was shown him.

To date, U.S. Iranian relations have been surprisingly good. There are no international disputes and Iran has done well with Covid. Unlike other countries like Italy and Spain that were ravaged by the pandemic, Iran has managed to successfully control the virus. This is good because it’s one less hindrance, one less obstacle to Hadi obtaining a visa. Further, when he applies for a visa, he’s not just a great IFBB Pro Bodybuilder, he’s a great IFBB Pro Bodybuilder who got Top 3 in 2019. If you don’t think being 3rd in the world helps you along, you’re nuts. This is a man who has earned his spot among the best and all parties involved will go out of their way to ensure he takes the stage.

As many of you know, I’m very critical of social media. In my eyes, social media can be very misleading; however, I do believe that in Choopan’s case, it paints a very accurate picture. The fans simply can’t sit still when it comes to this legendary bodybuilder. In their eyes, there’s no one he can’t beat. They think he’ll overrun Flex Lewis, Bonac, and will bring so much to the table that he’ll upset Brandon Curry. I suppose that’s possible, but unless he morphed into a different body in a year’s time, then I don’t think he’ll overrun the likes of Lewis, Bonac, or Curry.

Can Hadi repeat his 2019 success? I definitely think so, but last year he wasn’t up against Lewis, nor was Phil Heath making a comeback. Roelly was also considerably off and will have had over a year to focus on just one contest – the 2020 Olympia. While Choopan may bring what he brought in 2019, even with improvements, 2020 is a completely different can of worms.

I know a great many people want to throw the book at me for that. Let’s be fair. Phil is pompous and has rubbed a lot of people the wrong way, myself defitiniely included, but he’s a great bodybuilder. I agree that he won many of his Sandows – hands down. Did he beat Rhoden in ‘16? No. Did Rhoden destroy him in ‘18? Yes. That being said, if Phil brings 100% and his surgery went well, he’ll dust Hadi. If Dexter comes in 100% for his last hoorah, he’ll dust Hadi. If Roelly comes in at 100%, he’ll dwarf Hadi. So again, while Hadi is a freak and comes in with freaky condition and separation, 2020 may offer up a lineup where Choopan’s 2019 physique won’t crack the Top 3, in fact, it may not even crack the Top 6.

Remember, that when it’s all said and done, Choopan is a 212 competitor, so if the big guys come in shape and pose hard, the size differential might be enough to throw a monkey wrench into everything. Also, Hadi won’t be taking on the Flex Lewis we know, who at 212 was unstoppable, rather, he may be taking on a Flex Lewis at 220, maybe 225. If Flex is as dominant with 8-15lbs of additional, lean muscle mass, he blows Choopan out of the water. That’s fact, folks.