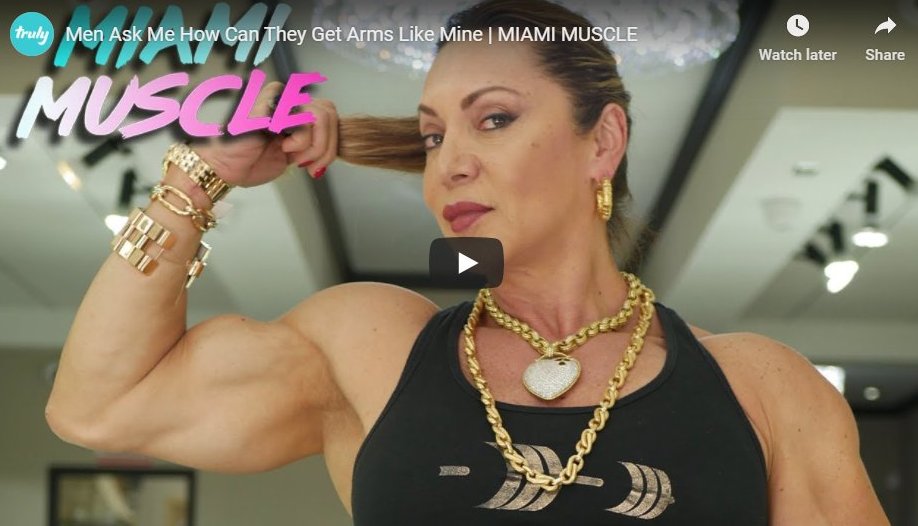 It’s a scene that plays out daily, weekly, yearly. You walk into Rypt Gym Miami and you see a world class facility, top of the line equipment, and a vibe unlike any other. When you’re at the front counter, you see photos on the wall, trophies, and a real emphasis on bodybuilding. That’s because Rypt Gym is an iron sanctuary where South Florida’s most hardcore athletes come to train. Miami is the gateway to Latin America and it’s one of the fastest growing, most exotic, and most exciting cities to be in!!

Just one look at the walls at Rypt and you see a woman who I refer to warmly as La Reina, the Queen, of Women’s Bodybuilding. I’m half Cuban and half Chilean, you can’t get more Latino than me, and 2005 Ms. Olympia Yaxeni Oriquen is our champion. This former runway model from Venezuela discovered the iron game and built one of the best physiques the sport has ever seen. She amassed countless titles, including multiple Ms. International crowns, and of course, the crown jewel of them all, the Ms. Olympia. What’s equally as impressive as the number of wins and top placings she’s earned, is her longevity in the sport, and the many contributions she’s made to it, through prepping competitors and inspiring countless men and women to follow their dreams and fight for what they believe in. Her faith in God is ironclad and she lives her life according to strong principles. I have a world of respect for La Reina and it makes me so happy to see her join the other great champions, back on the Ms. Olympia stage, this December in Las Vegas, NV. Seeing Yaxeni, Iris, and so many ladies who fought tooth and nail to keep the flagship women’s division alive, will be quite the experience.

Yaxeni never stopped. Although she took a couple years hiatus, she’s been competing pretty much uninterrupted for years. Her approach to building muscle, eating her meals, and posing for the judges, photographers, and audience goes back to the old school. Much like her contemporary & friend Iris Kyle, Yaxeni comes from a different era. We often hear the term “old school” thrown around when discussing the men, but that’s just because most of the women’s divisions are too new to have an old school. Women’s Bodybuildling has been around for nearly forty years and women like Oriquen came into the sport drawing inspiration from ladies in the 1980’s. That’s not to say their approach is better than that today, but the fact they’ve seen more, certainly gives everything they’re about many perspectives than what many of the ladies today may draw from.

I’ve interviewed Yaxeni at Rypt Gym many times over the years and each time, our interviews seem to touch upon new subjects. She is always thinking, always planning future moves, and is always big leagues while at the same time being humble – it’s who she is. At this stage of the game, winning isn’t the #1 priority. If she won the 2020 Ms. Olympia, that would, of course, be huge, but I don’t think it’s why she’s doing the contest.

At this stage of the game, I believe she wants to be part of the return of the division to the Olympia stage. Aside from the fact that this will be an amazing contest, definitely one for the record books, it’s also history in the making. The new owner of the Olympia weekend has spearheaded the resurgence and renaissance of muscular women. The division isn’t just back from the dead for a cameo appearance, rather, it’s back to being a powerhouse. It’s back in full force, with people who know how to market it correctly, and who are growing it. Men’s bodybuilding might be lagging a bit, but women’s bodybuilding is growing. Imagine that! Imagine that statement being made just five or six years ago. The sport is about to turn a key, new page and I think it makes sense to have some of the most decorated champions in the division there to see it get started right, even if it might rattle some cages.

The truth is, the younger women are most definitely aware of both Yaxeni’s and Iris’ presence. These ladies are graceful, experienced, and have both been at the top of the sport before. Whether you win 1 Olympia or 10, that gives you a mental edge that others simply don’t have. Also, even though Yaxeni only has 1 title, she It got beating Iris. Now, Iris has beat Yaxeni countless times, so it’s not to say Iris is intimidated by Oriquen, but she most certainly has her on her radar. My only point is, while Yaxeni only has one Ms. Olympia she has that mental edge and because she’s also beat Kyle, that’s something no other woman on that stage ever has, making Yaxeni incredibly dangerous as well.

Age has no bearing on things. Unlike the men, who start falling apart over the years, muscle counteracts the aging process for women. So long as there’s no injuries at play, I have personally seen women in their 50’s and 60’s – EASILY – look twenty years younger like nothing. I have seen women who are 70 look 40. I am not speaking with regards to what I’ve heard about or read, rather, ladies i have met and interviewed.

Yaxeni is young, but if she wanted to compete another 10 or fiteen years, she’d have zero problem doing so. And she might, but my thinking is, the ladies of the past era, want to help get the division started out right. Although WBB has been going strong through Wings of Strength since ths Ms. O went away, now that the crown jewel is back, it’s almost like the sport has started all over again. She wants to be a part of this new chapter.

It makes me very happy that not only is the division back, but that great champions like Yaxeni and Iris were courted to return. You don’t just open the door to legends, you invite them back, you give the respect and the accolades they have earned. That’s exactly what was done and why this is such a great time to be a fan of bodybuilding and physique-based sports. The owner is a fan and enthusiast of the sport; the Olympia isn’t just one of a basketful of holdings. This is personal to him and it’s personal to us all.

When Yaxeni takes the stage, she is Latin America’s champion. Her posing has that Latin flare, hearing her speak Spanish feels like home to us, and whenever she wins, we win. If you only knew how many fans she has in the Spanish speaking world, your jaw would drop. Everyone knows who Yaxeni is, what she’s all about, and everyone is excited about all the new chapters in her journey.

I hope you’re excited about the return of the Ms. Olympia, this December in Las Vegas, NV.