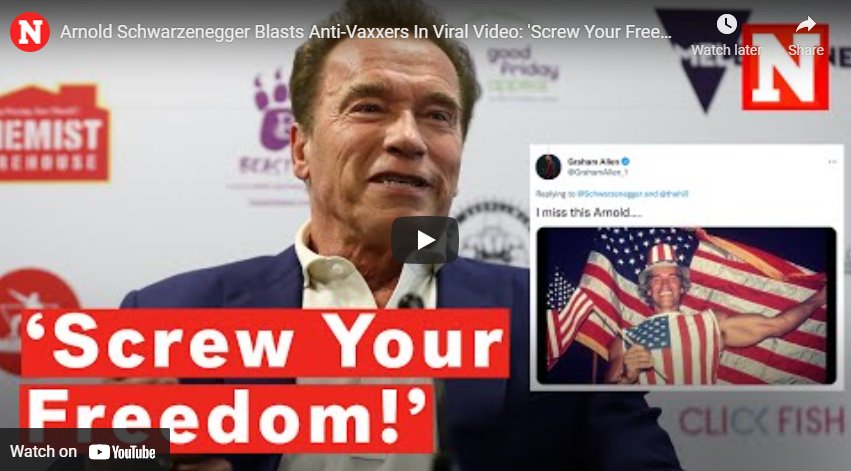 First and foremost, I’d like to stress one glaring point, Arnold Schwarzenegger is no stranger to ruffling feathers. He has been in front of the cameras, whether for bodybuilding, film, politics and/or philanthropy for the better part of a half century. He not only understands how the mainstream media works, but some might say he utilized many of the tactics they adopted, well before their very existence.

Before the 1990’s, news anchors, for example, didn’t weigh in on news, they simply reported it. Many times you couldn’t read a reporter’s personal biases; they spoke in monotone voices and even their facial expressions were devoid of anger, sadness,or indifference.

When you stop to think about the movie that put Arnold on the map, Pumping Iron, you realize that the picture wasn’t about bodybuilding, contest prep, or posing. It wasn’t a documentary, it was a docu-drama. Many of the feuds between the leading stars were, largely, fabricated. This was done because a movie about muscleheads fighting to rule over a sport no one had heard of, wasn’t exactly going to sell out theatres, but muscleheads fighting like school kids, that was a whole different story.

Schwarznegger is keen to the power he wields and he knows exactly how to push peoples’ buttons when he wants to. The fact of the matter is Arnold is known for his outspokenness and wanton disregard for the rules. Much like other politically-engaged celebrities (e.g. Jesse Ventura), Arnold doesn’t hold back and he’s keen to the power of soundbites. This is why I’m of the firm belief that “screw your freedom,” was exactly what The Oak wanted to say, he knew the fallout that would come of it, and quite frankly, he didn’t think anyone would dare miss his event or pull their support from him. Could this be the blunder of his career? Let’s discuss.

In many cases, when people get themselves in hot water with the press, they’ll say things like read the whole article or watch the whole video. This is a way of deflecting from what’s attributed to them and putting the onus on the viewer. If, in fact, the person was taken out of context, then looking at the bigger picture should minimize the scorn that came as a result of it; however, it’s an equally handy bluff card. What do I mean?

Well, let’s say that someone in fact did say something awful, they put the onus on the viewer to watch the full video, but they’re banking on the fact they won’t. In all honesty, we live in a soundbite age. People love to jump the gun, pass judgment, and ask questions later. Challenging critics to dig deeper, usually can disarm them, because they’re not going to read something that will amount to egg on their face.

Further, seldom is the case that the person who makes the insensitive remark, basks in the backlash. That’s precisely, what I believe, is happening here. Arnold isn’t upset that we’re upset, he’s reveling in it. If he had wanted to make a polite commentary, he knew exactly how to do that. Remember, aside from being a governor and movie star, he was married to a Kennedy. The Kennedy’s in America, are the closest thing to royalty. The Oak knows all too well how to be diplomatic and scholarly, but he was looking to brawl. He wasn’t aiming for civility, he was looking for a fight. Screw Your Freedom is synonymous with giving all his critics the middle finger. He also couldn’t have picked worse timing. Then again, one man’s garbage, is another man’s treasure.

As the Taliban overran the Afghan capital of Kabul and its president sprinted faster than Micheal Johnson out of the country, the international press ran stories of true gloom and despair. The one last sanctuary in the whole country, the airport, has seen men and women go to some pretty extreme lengths to find freedom.

Whereas thousands of Afghan citizens are willing to lose life and limb just for a chance at freedom, Arnold Schwarzenegger is on tv crapping on it. That’s enough to make peoples’ blood boil even more. And when I say everyone – I mean just that. You have fans, business owners, media and officials all looking at the most popular bodybuilder on Earth, with a great level of disdain. That being said, he wanted their (our) attention and he got it. Perhaps in his mind, the only way to truly get someone’s attention in this day and age, is to thoroughly offend them. Who knows, maybe he’s onto something, because everyone seems to have something to say – case in point. Here I am, writing an article that thousands of Iron Magazine’s faithful readers will read. Maybe that’s what works, but surely, Arnold could find more productive means.

That being said, for all the people who are talking about boycotting Arnold, never doing business with him again, and turning their backs on him, today, how many will actually back that up in the future? It’s one thing to be upset, initially, but will the bodybuilding world really turn on The Austrian Oak?

It’s really a tough call, in my opinion. I mean, while “The Arnold Classic” is seemingly Arnold’s show, his involvement is minimal. In America, The Lorimer’s and The Lorz do everything. Other major notables, like Mike Davies, do a ton of work for the event that takes over Columbus, OH, each year. The extent of Arnold’s involvement is to walk around the expo, wave his hand, take some photos and visit with the shrinking club of Golden Era bodybuilders who still attend the event. While it’s his namesake, that’s about all it is. Put in that perspective, boycotting the event doesn’t really have the same symbolic effect. He would lose money, but does anyone think Arnold relies on the money his contest makes survive? He was the star of Terminator, after all. The money he makes from his events is nothing to sneeze at, but I doubt he’ll be eating cat food under the Santa Monica pier anytime soon, if he loses some of those proceeds.

The fact is, the Arnold Classic this year (won’t have an expo), so maybe some companies don’t advertise, but as of 2022 and the future, we’re talking about the biggest fitness expo in the world. Does it make sense for supplement companies to skip that? For competitors, the purse at the Arnold is second only to the Olympia. Does it make sense for competitors to deny themselves that kind of a payday? For the fans… how many would actually sit out the chance to see the best physique-based athletes in the world, looking their best, battling on stage?

In the end, if you’re principled, then money and exposure take a back seat. On the flipside, if Arnold just played us all, then maybe you might reconsider. The fact is, Arnold loves America (otherwise he wouldn’t be here), he loves freedom, and respects the foundations our country was built on. That said, he has no filter, he’s insensitive, and he offended a lot of people. At the end of the day, we all don’t have to agree, but the goal is to be respectful. His rebuttal to that, might simply be, fuck that – I’ll say what I want, when I want. And that’s ok, too.