DO’S AND DON’TS TO GETTING SPONSORED 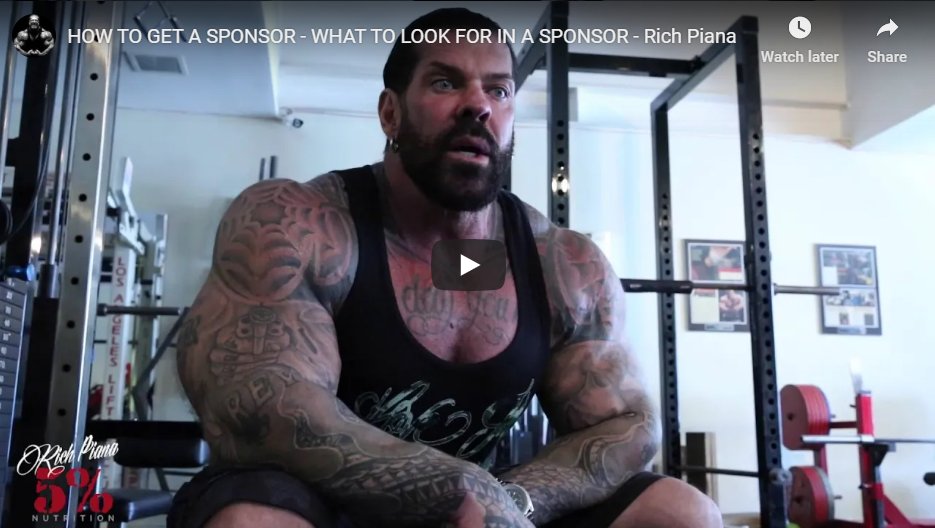 Frank Sinatra sang that if you could make it in New York, you could make it anywhere. The same can be said for the very, very few who can make living a living from fitness. Many who can, do so while working in a variety of roles. For those who take the time and study hard, personal training certifications are a great way to earn income. Those who put the time in and develop good customer service skills, can literally write their own ticket. Others will work at gyms, health food stores, and/or take gigs working at booths at busy expos.

Most of the people who work the Arnold Classic or Olympia, aren’t in fact sponsored athletes with fancy sports cars waiting for them outside; they’re average people paying their dues and answering twelve hours of stupid questions for $250. Some of them don’t even get money, they might settle for supps, or they might do it out of the kindness of their hearts. People who work for free, however, are suckers and there’s plenty of suckers in the industry, but I won’t expound on that. All I’ll say is, if you’re openly letting yourself get taken advantage of, there’ll be no shortage of companies and people that will do just that.

Everyone wants to say they’re with a company and they’ll stop at nothing to make it happen. Once an athlete can say they’re signed, on whatever level, that’s validation. The truth is, people outside the industry don’t get it. They don’t understand why anyone would spend thousands of dollars to get a gym membership, eat bland food day after day, train until practically passing out and then shaving their bodies, applying fake tan, and posing under lights for a panel of judges, simply to get a $5 soda can trophy. They also don’t understand why anyone would work twelve hours, eat their lunch under a folding table at an expo, and then say thank you for barely minimum wage money. Mainstream people don’t get it and most would never subject themselves to such conditions. So why do countless fitness-minded people willingly get screwed and then say thank you afterwards? It’s all heart, but it should also make sense.

Suckers don’t win – always remember that. If you do good work, then you should never do it for free. That’s perhaps the best advice I can impart on you from the jump. Further to that, think about your work product in terms of real world value. For example, all people need certain things to survive, call them basic necessities. There’s only so many hours in the day, so your top priority should be making a living. What you do with your free time is entirely on you; however, you have to pay your bills and be self-sufficient.

Don’t embark on a fitness journey by living on someone else’s dime. I get that Arnold had help from Joe Weider, but don’t mooch off others, until you get your big break because chances are, you never will. This isn’t the music business or Hollywood. You’re probably never going to have a triple platinum album or land a big movie role that pays you bank. This is fitness.

Are you going to win to be that one person who wins The Arnold Classic or the Olympia? I mean, you might be, but chances are, you’ll do well at local shows, maybe graduate to the regional level, and possibly do one or two shows at the national level and have your ass handed to you. Most people don’t get first callouts at national NPC shows, less become pro, and even less go on to win pro shows. Therefore, if competing is part of your goals, then compete in your free time, but be sure you have an actual job, first. For as many suckers as there in fitness, there’s a pretty healthy number of hustlers. Hustling can have a good context, but the hustlers I’m referring to, are users. Don’t be a user. Make it on your own dime. And don’t get taken advantage of.

Assuming you’re gainfully employed, paying your mortgage/rent, keeping the lights on, and food in your fridge, then investing your free time and extra income on a fitness journey is a perfectly fine path to follow. Competing is certainly a great vehicle to exploring the fitness industry, but it’s not the only way. If we learned anything from Rich Piana, it’s that for all the years he competed, he made very little money. He came close to earning pro status, but for all the preps and all the contests he competed in, he didn’t create a following and people certainly weren’t pounding on the door to hear his opinions. Marketing is key and if you’re able to develop a lingo, a fashion sense, and/or build your own community, then you’re going to become attractive to companies. Rich did all these things and Mutant gave him a very good deal. Once he signed, Piana could have become complacent. He was making good money, he was the featured star, and he was treated very well. He had job security and he could really grow with the company; however, he quickly realized that he didn’t need them. They, however, needed him. That’s another big DO. Value yourself correctly, have a solid work ethic, but never stop dreaming big. If Rich had stayed at Mutant, he would have continued being famous, but he never would have become as famous or as rich as he got.

A big a DON’T is dragging yourself on the ground and begging for a spot. If you work hard on your social media platforms, putting out content that draws traffic, and you’re good about keeping in touch with your followers, then you’re on top of your game. If you have something to offer, if your work translates to sales and your presence creates good will, then you need to include that in your presentation to a company.

You can answer questions, do conference calls, and provide analytics and data. Beyond that, the ball is in their court. If you absolutely must, you can follow-up once, but definitely not twice. They got your packet, they know who you are, and they can totally get in touch with you. We’re living in the digital age, after all. The worst possible mistake someone who aspires to getting signed can make, is becoming overwhelming.

Marketing directors and social media managers usually know who they want to work with, from the get go. It’s their job to keep tabs on rising stars, current stars, and also has-beens. They know what they know. They study trends, they look at comments on posts, and they look at like/dislike ratios. They know who bought their followers and they know how engaged audiences are. With that being said, no one knows everything, so it’s totally valid for a potential ambassador or athlete to break the ice. The point is, you can break it, but not pulverize. A lot of athletes simply don’t know when to stop – and sometimes, they may have made a perfect first impression, but hounded a company to the point they fall out of love with the ambassador.

Assuming an athlete gets signed and everything is looking good, many athletes drop the ball, simply, because they stop working. They’re no longer hungry, they’re no longer promoting the company the same way as when they wanted to get noticed. One of the biggest blunders rising stars make, is that they let their egos become way too big once they’re picked up by a company. The only thing that’s worse than not getting signed, is getting dropped. That’s not a look you want!!

While the fitness industry may seem vast when walking around huge expos like those at FIBO, The Arnold, or The Olympia; the industry is actually a lot smaller than you think. If an athlete gets dropped for being lazy, for not putting out content, not working expos, and/or for needing to constantly be reminded of contractual obligations, then word will get out and spread like wildfire. No one wants to work with a bum and no one wants to pour money down a well. After all, very few people can make a living in the fitness industry, and for every sweet paying gig someone has, there’s an army of people waiting ever-so-impatiently for it.

The bottom line is, if you put the work in and get signed, keep putting the work in to stay signed and earn more income and accolades. If your good fortune makes you hungrier, then who knows, you might be the next Rich Piana. Never beg, never settle, and never get so comfortable you’re no longer hungry. Oh yeah, and always dream big!