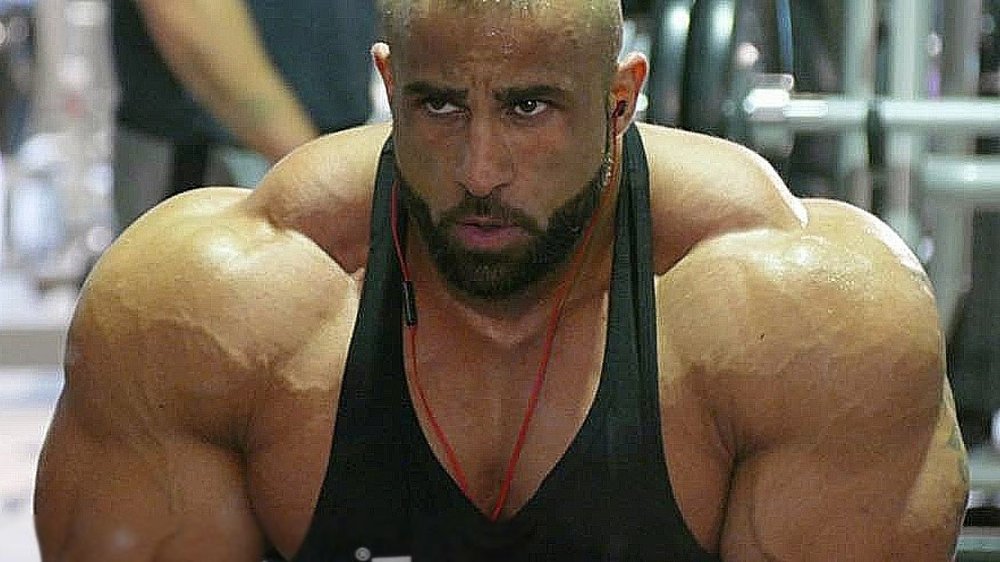 This week has seen a number of stories emerge from legendary Canadian bodybuilder and the force behind Hosstile Supps. First, Fouad Abiad, formally, announced his retirement. Next, his interview with Dennis “The Menace” James, dropped. Finally, it was announced that Abiad would be a guest commentator at the 2022 Arnold Classic in Columbus, OH.

These announcements, coupled with the surging popularity of his hit program, Bro Chat, have made him one of the most talked about bodybuilding celebrities in the fitness industry. To date, this level of stardom would only come as a result of some kind of scandal, whether it’s a video that went viral, or the result of a major feud. I mean, think about it, what’s the surest way to get famous, fast in this industry?

To date, there have been four or five major controversies since the Olympia, that bodybuilding fans haven’t been able to stop talking about. They all deal with negativity, calamities, and/or tons of speculation. Sometimes, if you break down the amount of speculation to truth, the ratios can be quite alarming, but it doesn’t stop people from talking about it nor does it stop the inevitable snowball effect. A lot of times, hardcore fans that battle on the message boards, don’t even know what the hell they’re mad about.

Anyways, Bro Chat, covers a number of topics, some bodybuilding related and others not, no one is getting actively trolled, and they don’t attempt to break stories without all the facts. They’re not trying to pretend to be journalists, they’re just four guys shooting the shit. This dynamic has spread like wildfire and a lion’s share of the show’s success, goes to Fouad.

In many ways, Fouad has been able to far surpass the role of merely being a physique-based pro. I don’t mean to downplay those who have earned pro status, as not having much more to offer, but he’s been able to consistently expand his position. Hosstile Supps has consistently grown over time. It’s a respected brand, that’s not received bad press, and it’s associated with a decorated pro bodybulider who is also a well known coach. The fact is, marketing is big, but credibility is even bigger. In fact, cred is something you simply can’t buy, and once you have it, you protect it. I believe that the more work you invest into a project, the more success it will have. People see how strongly Fouad feels about his line and that translates to customers giving him their business. Even on BroChat, which allows its co-hosts to promote their own sponsors by what they wear, Fouad appears with his HS backdrop, sometimes even HS attire. He’s not pushing the line, but he’s very proud of it, and people can’t help but want to try it.

BroChat is liquid gold. It’s something that RX Muscle has been trying to do for a decade with The Whack Pack, but never seen any kind of success on this level. Whereas, RX and MD have both put entertaining lineups together, BC consists of top pro bodybuilders who have ruled the sport and lived to talk about it. The usual lineup consists of Fouad, Guy Cisternino, and Nick Walker. The fourth spot consists of 3-4 somewhat regulars, usually Iain Valliere and Brettt Wilkin. These guys talk about anything that comes to mind, with a level of candor that guys like Palumbo strive for, but are far too guarded to allow.

The hosts make the show, but they all fall in line to the beat of Fouad’s drum. I don’t think they agree beforehand on doing so and I certainly don’t think the program is scripted, I just think that the co-hosts consciously and subconsciously recognize Abiad as the leader. That being said, he doesn’t flaunt the power, he just uses when it needs to be employed. All in all, a lion’s share of the credit for BroChat, belongs to Fouad.

The fact is, most guys who formally retire, are looking to ride off into the sunset. If anything, competing may hinder Fouad from becoming more famous. What the hell does he need the stage for? He’s running a lucrative supplement company, leading the most successful bodybuilding program on YouTube (with no paid promotion or negativity), and now he’s been announced as a featured commentator for the 2022 Arnold Classic in Columbus, OH.

For those you who live under a rock, the Arnold is second only to the Mr. Olympia. Also, the Arnold, unlike the Olympia, is a wholly different contest form any other in the sport. Whereas the Olympia is owned and operated by those working for Jake Wood, that team is a lot closer in line to the folks who run the IFBB Pro League and NPC. I don’t think that’s a point that can be argued. The Arnold, on the other hands, also has key federation people, but Arnold is far more of a free spirit than Jake Wood. In fact, there’s years where Arnold nearly goes rogue and he could care less about consequences. With that said, I think Fouad becoming a featured member of the Arnold staff, is key. I don’t know that he would have been able to walk onto the Olympia press team, but now, it’s possible.

You don’t just join Shawn Ray, Bob Cicherillo, and Dennis James. Even though Fouad is super popular and everyone loves everything he does, there’s no way he could have been picked up the elite Olympia crew of IFBB Hall of Famers. He’s just not there yet, at least not in their eyes.

I truly believe if Shawn Ray or Bob Chick were asked, behind closed doors, if Fouad Abiad would make a great addition to their Olympia team, I think they’d be like “Fouad, who?” I’m serious. I don’t think the older guys see much value in what the new guard is doing. To them, Bro Chat might be four guys talking into webcams, with no production value. They might argue that the numbers on YouTube don’t translate to ticket sales or PPV downloads. And they might be right, but more than likely, I think they’d be wrong. I happen to think that if you can keep an audience going for 30 minutes, an hour, or more, then you have a level of talent that’s hard to deny. Also, just one look at the comments, the likes/dislikes, and the reposts, that BC draws and the case is made.

With Fouad joining the Arnold team, the comparisons will start to be made. Of course, this, largely, depends on how well he does covering the contest, keeping the flow going, and keeping the audience engaged. Let’s say that Abiad is able to score the same level of fan engagement Bro Chat gets, for his Arnold coverage, then people are going to start comparing him to what the Olympia commentators are doing.

As Cicherillo would say, it’s apples and oranges, but if enough people start to complain, then the businessman in Jake Wood, might start to reevaluate who’s on his team.

In my opinion, Shawn Ray has amazing job security; he’s a hall of famer and the most photographed bodybuilder in the history of FLEX Magazine; however, to 20 somethings who never bought a FLEX Magazine on newsstands, the starpower of BroChat might seem more impressive. At the end of the day, both the old guard and the new guard can co-exist, but with Abiad at the Arnold in 2022, it might expedite the process by which he’s courted by Jake’s team. It will happen. Although the Arnold and the O are wholly distinct, I have no doubt they keep up with each other.

While I’m bummed that Fouad is retiring, I can hardly blame him. From his supps company to Bro Chat to being part of the Arnold Classic team, I think the sky’s the limit for him. I commend him on his work ethic, consistency, and vision. I wish him nothing but the very best.