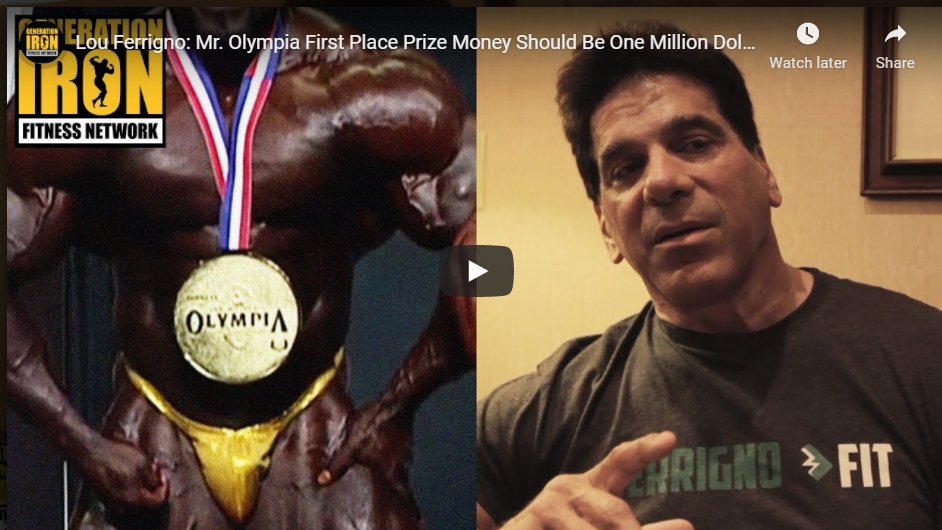 I recently watched a video interview where Lou Ferrigno was asked about the financial realm of the bodybuilding industry. Lou, of all people, knows a thing or two about money. Through his businesses, movie career, and time on television, he’s racked up a net worth (according to several sources) of around $12M. Was bodybuilding where he made his millions? Nope. Not even close. But he chimed in on exactly how much today’s bodybuilders should be making in his eyes.

I’m not going to downplay the fact that MOST bodybuilders make no money from their bodybuilding passion. In fact, many bodybuilders need to work a job while bodybuilding in order to make ends meet and pay for their lifestyle.

Back in the day, bodybuilders weren’t paid a ton of money – today, it can be debated that while things have certainly increased in regard to prize money, it’s still not anywhere close to what other professional athletes make. If you were to look at the NFL in 2020, the minimum salary for players was $610,000. No, I kid you not. Players who sit on the bench and have a front-row seat to watch their teammates go out and perform are paid $610k to not see any game time. I’m starting to rethink my career path as I write this.

That all being said, most bodybuilders TODAY will never see $610,000 a year (actually, nowhere close). You have to be one of the top bodybuilders in the world to see that kind of money. Sponsorships are hard to come by as many supplement companies aren’t writing checks to bring athletes on board (which I agree with their stance of moving away from that expense). You don’t see many bodybuilders on television or in movies like what Arnold Schwarzenegger and Lou Ferrigno have accomplished back in their heyday.

So, is Lou Ferrigno correct that bodybuilders should be paid more and are grossly underpaid? Eh, I’m not sure I’m buying it. In the interview, Lou Ferrigno mentioned he feels that bodybuilding physiques are going to start downsizing and moving more towards aesthetics. I don’t believe that to be the case either – especially after Big Ramy just won the Olympia. Mind you, Big Ramy was awarded a check for $400,000 after winning the 2020 Olympia, which is drastically below the $1M that Lou Ferrigno believes they deserve for taking home the Sandow.

I don’t agree in the slightest bit that the winner of the Mr. Olympia competition deserves $1M. Honestly, for what? They eat, train, sleep, repeat. That’s not to downplay their hard work and dedication, but there are plenty of people out there who work a 9-5 or own a business who wouldn’t make $1M in several years combined. Why should bodybuilders deserve a $1M payday (for a single competition)? I’m just not on board with it.

Bodybuilding is not a mainstream sport. It’s not like people are sitting on their couches every night watching bodybuilding or even packing venues on a daily basis. Heck, you’re lucky to see a bodybuilding show once a week if you were to include all organizations, and you’d need to be there in person to follow the sport as a die-hard fan. So, explain to me why a bodybuilder would deserve $1M for ONE SHOW, and it may be the only stage they step on all year. I think Lou Ferrigno has absolutely lost his mind.

Grow the Sport AND THEN Worry About the Prize Money

If you were to poll Americans, I’m willing to bet over 90% of them couldn’t name a single bodybuilder in men’s open who competes today – not one. Sure, they may say Arnold just to name someone they’ve actually heard of, but there is NO ONE in the sport today that has built the sport and has been recognized as a bodybuilder like Arnold – and that’s not to take anything away from Lou Ferrigno, but even he hasn’t even done enough to help put bodybuilding on the radar from back in the day. Sure, he was the Incredible Hulk, but most people these days probably wouldn’t even speak his name when asked who the Incredible Hulk was.

If you were to look at median household income in 2019 (according to Census.gov), it was $68,000. That’s HOUSEHOLD income. Split that in half, the average American would be working 52 weeks a year for $34,000. I’m dating back to 2019 since 2020 was a horrible year for most people, and it’s expected that, unfortunately, many people brought in less money than 2019.

Why are we talking about paying bodybuilders more money instead of growing the sport? If you were able to grow the sport, there would clearly be more money to play with. But Lou Ferrigno saying $1M should go to the Olympia winner is asinine. Unless he’s putting up the difference in money, sit down. And this is coming from a guy in the industry who is known for not exactly being the best ambassador for the sport by charging people money for just about every interaction they have with him – as if he’s actually relevant in the industry anymore. Heck, Big Ramy, Phil Heath, Jay Cutler, and Brandon Curry don’t even do that, and THEY ACTUALLY WON THE OLYMPIA (something Lou Ferrigno never accomplished).

There’s still the debate on if bodybuilding is even a sport or if it’s a pageant. You’re scored based on your looks, not a skill such as throwing a ball into a basket or hitting a golf ball into a hole. So, I guess a topic of discussion would still be how much is bodybuilding worth compared to the attention put on all other sports? And at what point do bodybuilders deserve more money? But $400,000 to win one show? That’s not bad at all, in my opinion.