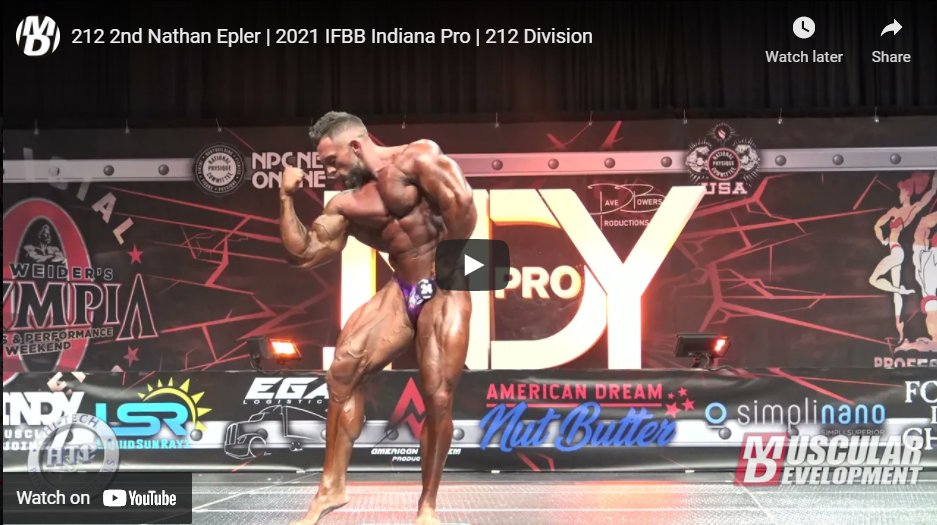 With the 2021 contest season off to a great start, one can’t help but focus on the 212 Bodybuilding Division. True to its core values, the bodybuilders here bring size, condition, and symmetry. They pose hard and they’re used to being compared over and over again. Just last week, Tonio Burton came out of nowhere, to win the coveted Indy Pro title. Dave Bowers and his team put together a fantastic production and many of the biggest names in the the category were looking to make a lasting impression at the first contest of the season.

The truth is, the winner of the show was a guy who very few social media outlets covered and a guy that many fans were unfamiliar with. It goes to show you, hype doesn’t win bodybuilding shows. In the runner-up spot was Nathan Epler. That’s actually an interesting fact because for most of the contest, it appeared as if Epler would be winning. He’s from Indiana, it was his pro debut, and winning there would have been a dream come true. Nonetheless, this was a contest that went down to the wire, with Burton and Epler both giving their all, but that’s not where it ended – not by a longshot!

You had two other guys who were really on the Top 2’s heels. John Jewett looked spectacular and he really seemed to be giving Epler a run for his money. Bryan Balzano, who I interviewed extensively in 2014 for RxMuscle, had all but disappeared from the stage due to injuries and rehab. I only became aware of his entry about a week before the contest. In any event, the 2014 NPC Middleweight USA champion brought the goods. He was in picture perfect shape, with excellent condition, and really made Jewett earn that 3rd place. Noel Adame, who would earn 5th place, also held his own. These guys were just giving everything they had and when the judges made their decisions, everyone was gracious. This is another attribute that distinguishes The 212 from all other categories. They are known for their terrific sportsmanship.

In fact, in what seemed like a direct throwback to 2019, when then defending Arnold champion William “The Conqueror” Bonac was narrowly defeated by Brandon “The Prodigy” Curry, he could have acted as others have in a similar situation. He could have pointed at “politics,” he could have said the judges didn’t do their jobs right, or he could have gone on a social media crusade, calling himself things like “the uncrowned champ” and so on. Instead, Bonac not only recognized the new winner, but he rallied his own fans behind him. In similar fashion, Nathan Epler did the exact same; however, it should be noted that unlike Bonac, a seasoned veteran, Epler was gracious in defeat in a whole other kind of way. Remember, this was his pro debut, in his backyard, and he was overlooked by many in the media. Like Tonio, no one was predicting Epler to win, and there he was, so close to doing just that; he so close he could taste it. But from the moment Toni won, Nathan gave the champ his respect and conducted himself like a true ambassador for the sport. 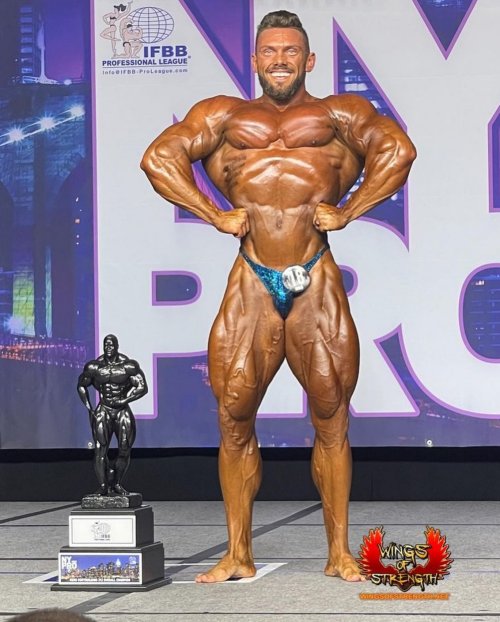 This past weekend was 100% Nathan’s time. I believe he impressed a lot of people in Indianapolis, from judges to media to fans. Perhaps the single most important person Epler impressed, was probably, himself. Both Epler and Burton not only got validation with their placings, but it must have given them the self confidence to get in the mix with guys who have ourranked them in wins and towered over them with seniority. It’s one thing to believe in yourself and have a positive outlook, but I’m of the belief that winning a contest gives you a level of courage unlike anything else. I don’t think the guys who qualify through points feel this way and maybe that’s why so many pro’s look down on racking up 2nd’s and 3rd’s in order to get to the biggest contest in physique-based sports. When you win, the judges recognize you as the very best among pro’s. That’s what happened to Tonio in Indy, and it’s what happened to Nathan, just a week later in Tampa, for the 2021 NY Pro.

Tampa, like Indy, also saw a very competitive John Jewett, who took runner-up to Epler. Noel Adame was once again knocking on the door. He may not have won, but between Indy and NY, he’s definitely ensuring his place among the very best in Orlando, FL. Hometown favorite Derik Oslan was also in top form, taking a key 4th place after an unexpected placing in Indy. The fact is, the guys in Tampa (for New York) gave their all.

John Jewett was once again being compared heavily to Epler, only this time, the two were effectively battling for the top spots. Much like Epler’s friendship with Burton, Nathan and John have become quite tight as well. There’s no point to being adversarial – bodybuilding isn’t a sport about guys against guys. It’s a sport where each competitor needs to look their absolute best and then get scored according to each judge’s subjective opinion.

I know we say this often, but sometimes I feel like folks just don’t get it. I’ve already seen and heard of people, stunned, like literally stunned, that the top guys don’t get salty with one another. Anyways, you’ll never see that in The 212 and the newer generations are keeping that tradition going strong. It’s always great to see guys who have really nailed it, really done everything possible, having a good time on stage. That’s what it’s all about.

Nathan brought his best – again – and he battled with everything he had. We could definitely talk about minor physique distinctions, what song Nathan posed to, or what his cheat meal consisted of, but I just have to point out how big this win and last week’s placing are for Epler.

For starters, it’s only been a week from his pro debut, yet he’s already been able to process a narrow defeat and claim a key win. It takes most pro’s an entire career just to experience this. While winning a contest gives an athlete an undeniable level of confidence, taking a close second adds a certain type of skepticism that’s also very much needed, when ultimately, getting on the most exalted stage in the sport.

You see, a lot of competitors wrongly assume that if you’re dead center and don’t move – you’ll win. Others think that if you win the prejudging, you win the show. Both assumptions can prove costly. You only win, when the judges say you do. Who knows if last week’s mindset would have won the following week’s contest? The truth is, if you think you’re going to win, whether consciously or subconsciously, it could translate into even a hair’s less intensity and then – you lose the show. The point is, Epler left no stone unturned. He brought the hunger of a runner-up, underdog, and a rookie who wanted his day in the spotlight. He got all that, but with all due respect to the Indy Pro, on a far bigger, more strategic stage.

Here’s the pecking order in bodybuilding. You’ve got pro shows in general, then you have shows like Pittsburgh, Tampa, and Chicago, which are all extremely key. Then you have the NY Pro, the old Night of Champions, the historic 3rd most important contest. Above it, you have The Arnold Classic. At the very top, you have the Olympia. The fact is, Epler could have won a pro show in Indy, but instead, he won the 3rd biggest contest in the sport. He won Steve Weinberger’s contest. Just let that sink in.

On paper, a win is a win. On paper, an Olympia qual is an Olympia qual. In reality, however, Nathan Epler has just carved a notch for himself in both 212 history and the 212 hierarchy. Anyone who wins the Arnold or the NY Pro gets automatic buzz going into the 212 Olympia Showdown. Since the Arnold no longer offers 212 Bodybuilding, the significance of the NY Pro 212 title increases even more in value. What that means is, when pundits and super-fans start handicapping the Olympia, Nathan Epler’s name will now be in the conversation. When the likes of Shaun Clarida, Kamal El Gargni, and Derek Lunsford get brought up, so too will Nathan Epler’s. In fact, Nathan Epler is in an even more commanding spot than Lunsford, thanks to his 2021 win; he’s an even hotter stock than last year’s 3rd place winner George “Da Bull” Peterson. Again, that’s not personal, it may not even reflect my personal opinions. It just is what it is. When you win the NY Pro, you are second only to Olympia and Arnold. I don’t mind stating the obvious – hell – even the folks in the cheap seats should know this.

Where do you see Nathan Epler in 2021? This season just kicked off so he could do more shows, make more prize money, and get more exposure. That being said, is that the smart thing to do? I could see where he’d want to hunker down, give his body a little break, and then focus on fine-tuning and prepping towards the Olympia. I could also see him getting with his sponsors and figuring out appearances. There are other ways to stay in sight, travel the world, and build your fanbase, than competing. I’m sure Epler’s camp will do what’s needed to make the biggest impact on The Showdown. I hope you enjoyed reading my article, here, at Iron Magazine. I look forward to reading your feedback in the comments.