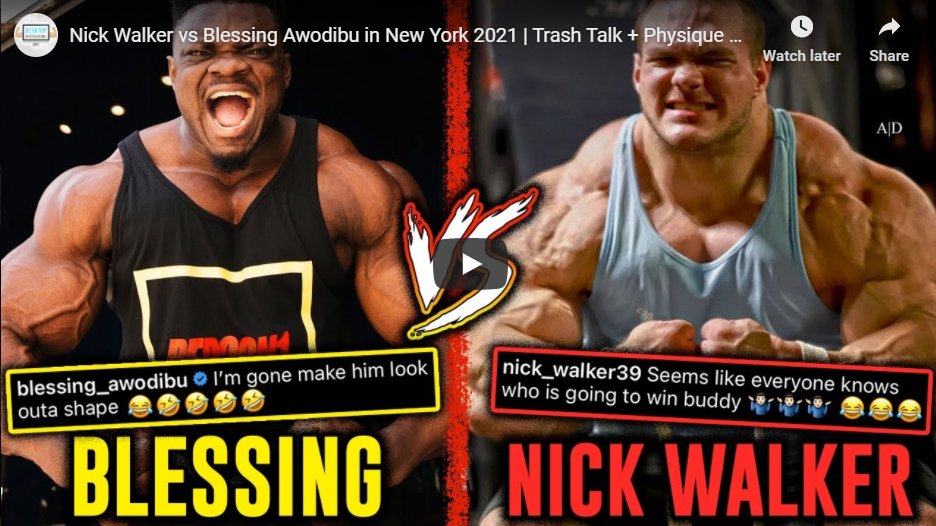 Sometimes I feel like a clairvoyant when it comes to the articles I pen for Iron Magazine. Just last week I wrote an article asking the question of whether or not feuds made the fitness industry more interesting. Well, the drama between Nick and Blessing is getting more and more people fired up on the boards, particularly as brand-loyal cadres who want to broadcast their loyalty with each respective company. As is often the case, these feuds quickly spiral out of control, where the actors themselves begin to take a backseat. Isn’t that bizarre?

You’d think that the opposing camps would list the many pro’s each guy they support has (e.g. more size, better condition, better posing, etc). You’d think the fans would compare each athlete’s contest record, trying to prove which athlete is superior, based on how long they’ve been competing, in what lineups, and how their physiques have evolved over the course of time. These are all plausible factors to settle scores on social media; however, as Kai Greene would say, “that was then and this is now, today is a new day.”

On the one hand Nick took his pro card in commanding fashion, doing quite well on his pro debut; meanwhile Blessing has yet to make his pro debut, largely because of the chaotic year 2020 was, but he’s more than ready to hit the stage and kick major ass. So the question is, how will each guy do at the iconic 2021 IFBB Pro League New York Pro, celebrated in Tampa, FL. The NY Pro is the 3rd most important bodybuilding contest on the pro circuit and whoever wins there, will have an enormous amount of buzz going into any event, particularly the 2021 Mr. Olympia.

Buzz is what it’s all about. Buzz is what got this feud started. You have two very popular guys who are prepping for Steve Weinberger’s New York Pro. They both want the title, joining some of the sport’s most star-studded champions, and the media sees endless possibilities by fanning the flames of a feud that really isn’t all that serious. What makes these two guys so promising? Well, of course, they have great physiques, they have paid their dues, and they have earned the coveted and elusive IFBB pro cards, but much like I said on my article last week, if Pumping Iron had only been about a few guys training in a largely nondescript garage gym in Venice Beach, CA nearly half a century ago, no one would be talking about it, today. Bodybuilding is what we all love, but muscle alone is boring. It may seem like I’m way off, but when you look back at the early 2000’s, a lot of people remember the feud between Kamali and Titus or Ray and Priest, far more, than many of the contests of the day. Similarly so, the media has a golden opportunity here. If they can pit these guys against each other, with their camps doing the same, then everyone wins. Because if they’re hot, their sponsors are hot, and the media has something to write about in the months leading up to the beginning of the contest season. You have two young pro’s (young in terms of how long they’ve had their cards) and while they may not have asked for the attention, they certainly aren’t in any rush to turn it away.

I don’t care what anyone says in this sport. I don’t care if you train in sweats, with oversized hoodies on, sunglasses and a facemask. You can say you don’t want to be bothered in the gym, you can say you’re a private person, and you can say you just want to be left alone; HOWEVER, when the entire industry hangs on your every word, when the media is constantly refreshing your social media platforms, and everyone you know – from steady workout buddies to the guy who scans your keycard at the gym – everyone – is being asked what you’re doing, what you’re thinking, what your next move is going to be, THAT, is addictive. Right now, everyone is talking about this feud, largely, because it’s the only game in town. That’s no disrespect to either of these awesome new pro’s, but they have to be aware that they’re not A LIsters just yet. That designation is for guys like Ramy, Curry, Bonac, Winklaar and Heath. They’re nowhere near that point, but in time, I have no doubt they will be.

This feud could be good for them – provided it doesn’t get personal. If you look at the bigger picture, this is a truly mutually beneficial situation, but once it gets personal, then it can get ugly. Arnold and Franco had a friendly rivalry; Titus and Kamali did not. Kai and Phil also didn’t have an amicable rivalry, but its antics made the 3 Olympias where they battled, among the most popular of all. And I don’t care what guys say in their retirement. Any and all attempts to rewrite history are comical to me. Kai and Phil almost went to blows in 2014, on stage, before the entire world. That little tantrum is what I believe kept the Olympia from being broadcast on NBC Sports that year. That was not staged and had those guys been in an alley, it woulda gone done. Believe you me, those guys were just about at their breaking points. The problem, though, is they let it get personal.

Look at The Black Swan and CBum. These guys kept the whole world of Classic Physique lit up as the world looked to the 2020 contest. There was so much going on, so many people wanted information and couldn’t get it, and the media looked at both of these guys for an all out war on social media. In fact, the most popular Youtuber online, even suggested that if Ansley didn’t win, he should consider leaving the division. And you know he didn’t mean moving up to Bodybuilding, more likely, moving down to Men’s Physique. That kind of statement is utterly absurd, but the person saying it, happened to be a huge Bumstead fan. That’s what I mean when I say the media likes to fan the flames of a feud. What’s great about this story is that when it came time to be champions, both CBum and The Black Swan stepped up. They congratulated each other on stage – AND – they continued to be good sports after the contest and on post-contest interviews. Can we expect the same from Nick and Blessing at the 2021 IFBB Pro League New York Pro? I certainly hope so.

I also hope these guys talk way before the contest. One of the two, doesn’t matter who, should pick up the phone and call the other. It’s totally fine – and entertaining – to let this thing build up more as the contest approaches, but it’s worth making the effort to keep the rhetoric lighthearted and the attacks, not personal. Do you see these guys being cool to each other on stage, do you see them squashing the feud before the contest? What say you?