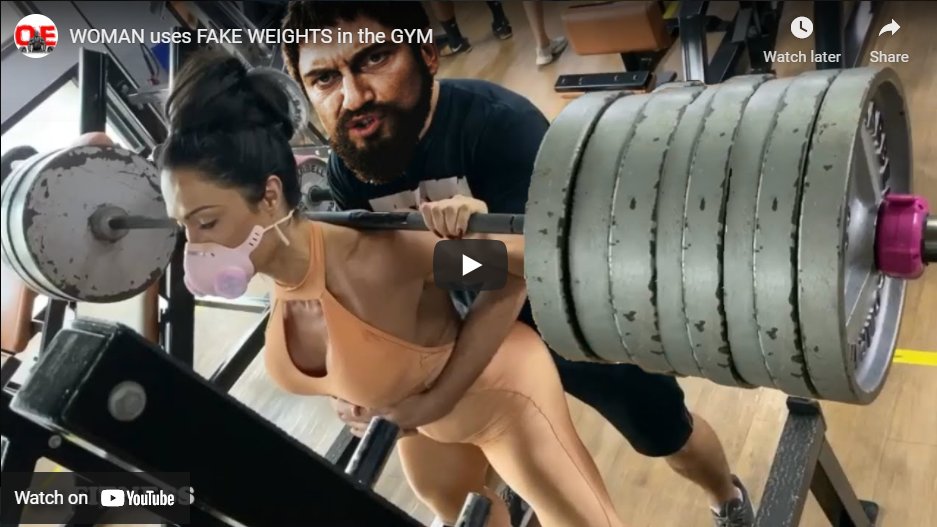 They say that no publicity is bad publicity but I tend to disagree. Bad publicity may get you attention and likes (which many are after on social media), but it can also damage your reputation and even career. After a year full of people using fake weights, in the back of my head, I kept telling myself that these foolish behaviors would end – but I was WRONG.

We have seen and watched various Instagram personalities such as Kali Muscle, Brad Castleberry, and Gracyanne Barbosa effortlessly set “world records” in the gym without as much as a trembled muscle fiber. I mean, heck, if they’re that strong they should make it official and call the Guinness Book of World Records, no? After all, if you’re the strongest person in the world on a given lift, wouldn’t you want it to be official somewhere and have your name in the record books?

I’m going to use the three individuals I touched on above as placeholders for this article. Just look at them. Plastic surgery. Anabolics. And… fake weights. Now granted, those individuals aren’t “weak” but rather play us all as fools which makes them look dumber than the people who actually believe their “feats of strength.” Watching someone like Gracyanne Barbosa squatting 495 pounds for 10 reps when she only weighs around 130 without even grimacing or showing any type of strain whatsoever, should be a tell-tale sign that something fishy is going on here.

I mean, if you’re going to fake lifts, at least do a little bit of acting as if the weight is heavy. Having an emotionless expression on your face pretty much raises a red flag that either you’re using fake weights or you’re not human.

For many of them, their lifts are as fake as their personalities. They are putting up a front for whatever they are lacking within them and it causes them to act foolish to gain attention. Look, ask anyone in the industry if they like Brad Castleberry and I’m willing to bet a high percentage of them think he’s a tool. Kali Muscle got off the sauce and is now a fraction of his former muscular self. And Gracyanne Barbosa, where do you even start with her? She looks to have more plastic surgery than Michael Jackson’s face.

Lies, lies, and more lies. It’s all FAKE. It pains me to even be writing about this topic but I feel someone needs to speak up. It’s painting a false image of our industry. I’m not saying our industry is full of a bunch of weak individuals (hardly the case at all), but it’s giving the illusion that influencers have almost superhuman strength – which they don’t.

I’ll give it to these individuals. It’s entertaining to see people appear to throw up a ton of weight. But deep down we all know it’s fake which diminishes most of the enjoyment. You see a bar loaded up with an ungodly amount of weight and watch the individual move the bar through a full range of motion and then slam it down and prance around the gym like they just hit the lottery (or maybe that’s just Castleberry doing that?). Either way, it’s comical. If anything, the people who frequent these gyms are probably laughing their faces off because they watch these influencers in the gym every day and when they actually use real weights, it has to make them chuckle. I mean, who effortlessly squats 495 and then struggles as if they’re going to die doing 135?

What’s even funnier is when they get called out in person, they always say they’ll meet the person to show them how strong they are – and then never show up. Or they’ll deflect the question entirely and randomly say something stupid. (Ehem, Brad Castleberry)

I actually feel bad for their trainers. I wouldn’t want to be associated with these clowns. They’re a joke. A laughing stock of the industry. They prey off of the naïve and try to monetize from their (fake) efforts. Several people have outed these “influencers” but we need to keep the pressure on them as this nonsense needs to stop.

The Dangers of Fake Weights

These days you can purchase fake weights just about everywhere online. That being said, unless you are using them for some sort of prop, office décor, or photoshoot, don’t waste your money. Do you really want to be known as the guy who brings fake weights into a gym just so he can take photos or videos for Instagram? If I ever saw this take place at my gym, I’d be taking pictures and videoing the entire thing to expose them for the tool they are.

Everything these days is for social media. IT’S FOR THE VIEWS! Honestly, if you’re entire existence and worth is based on what you put on social media, you’re pathetic. Sorry to burst your bubble.

Using fake weights in the industry is extremely disrespectful to all of us who legitimately lift heavy weights. We deserve the respect for heavy lifts, not your fake weights. Other than it being disrespectful, there are some major dangers that come into play.

Being that the people using fake weights and posting their “accomplishments” are social media influencers, they tend to have a large following. When the younger generation gets ahold of their videos, they see a guy or gal tossing around some heavy weight and think they too can lift that weight. They go to the gym, toss on the plates, and wind up gasping for air when the bar comes crashing down on top of them. While it may be funny to think of someone getting stuck under a bar for being stupid, that stupidity can be fatal (and as history would prove, there have been several very bad injuries and even deaths from lifting accidents).

I don’t want to see people getting hurt and for that reason, I want this fake weight nonsense to end. If you want to use it for a photoshoot to look good in a shot, awesome (supplement brands do it all the time with their athletes). But claiming to do a set with an insane amount of weight when it’s really all fake is dumb and negligent in my opinion.