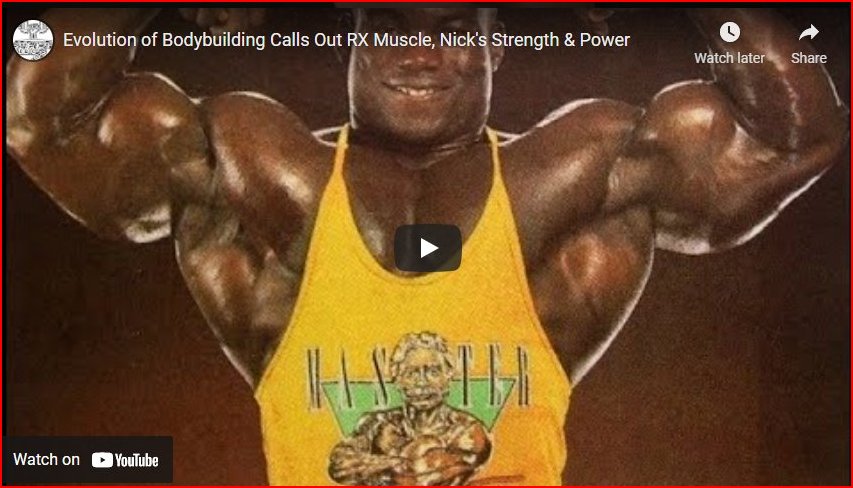 With all the deaths in bodybuilding as of late, it seems like bad news just keeps on coming. From John Meadows to Phil Hernon to John Meadows then George “Da Bull” Peterson and Shawn “Flexatron” Rhoden, just to name a few, the fitness community has been rocked by deaths throughout 2021. We’ve also lost a large number of women, from multiple divisions, which only makes matters worse. The industry has never had a year like 2021 and it just seems like it’s been nonstop bad news.

To date every early news report that speculated as to a bodybuilder’s death, proved to be accurate. Many news outlets cover these topics over the course of a few videos and/or articles. There’s the first video which typically is the most speculative. Many responsible sites won’t touch the story at this point. There’s simply not enough information to release any kind of video. The sites which are desperate for hits, have no moral quarrels doing so. Each time more information is discovered, clickbait sites will make a new video with each new fact. Eventually, when the news is completely confirmed any of these sites will then turn to potential stories within the story. 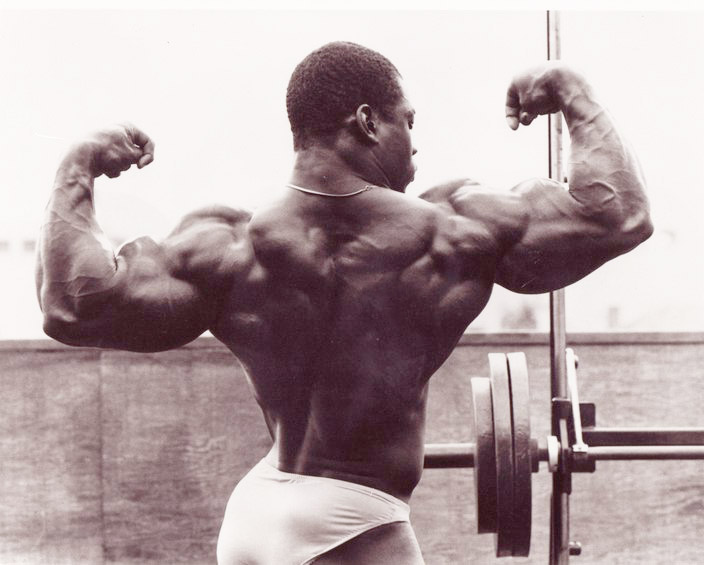 For example look at the sheer number of videos and articles that have come out, mostly, bashing “Sugar” Shawn Ray over his statements at that train wreck of an interview on Flexatron that Dave Palumbo of RxMuscle put together. If you were to tally up the number of videos related to Shawn Ray’s interview vs the number of videos remembering Shawn Rhoden, you might find yourself looking at a dead heat. And that’s just it, the sites that chase traffic, do not like letting go of stories until there’s no possibility for more hits. What’s worse, some of these sites won’t do the right thing, even in the face of overwhelming truth. Let’s talk about the news of Victor Richards’ death.

IFBB Pro Victor Richards is a bodybuilding legend. He’s known all around the world, earning his pro status in Nigeria, and then touring the globe. He built a phenomenal physique, with that signature 1990’s condition that so many fans of the sport remember fondly, today. Victor had huge fan appeal and would get mobbed wherever he went. Fans couldn’t get enough of him! They wanted photos with him, they’d grow impatient waiting for him to autograph their magazines or talk to them about how to build muscle. The guy was a real people person; he was respected by fans, the media, and the officials. Unfortunately, once many competitors leave the stage, unless they start working with a sponsor company or they get into the media, many former bodybuilding greats tend to transition back into normal life. They may occasionally do an interview or spontaneously be spotted at a contest, seminar, or expo, but for the most they’ve left the life of bright lights, posing oil, and photo shoots.

In their absence, fans start to speculate as to where they are, what they’re doing, and why they’ve basically gone off the grid. It happens to legends from all eras. And this type of conversation is commonplace on message boards, list-servs, and social media groups. If the fans don’t get updates, they tend to make their own up, over time. When, all of a sudden, a death rumor, for example, snowballs and gets picked up by a big outlet (e.g. Generation Iron in this case), things tend to get pretty crazy – and fast!

Remember, if there’s a rumor making the rounds about a largely absent fitness celebrity and there’s no one to refute it, then it becomes more and more tempting for sites that yearn for relevancy to spring to action. Many of the people who own and operate these webpages, YouTube channels, and or print publications, can’t stay on the sidelines for long. They’ll start reporting, if anything, so that they won’t be behind their competition. They’ll literally get on video, just to say they have nothing to report, but they’ll make sure to release something. That’s where we’re at with many of the most well known sites in the sport. Much of their content is fluff, but it’s fluff that holds their place in the order of succession of outlets reporting on news. Remember, for reporters, it’s very important to say they either broke a story or were part of that first group that’s responsible for getting the news out. Put in bodybuilding terms, it’s like being in the First Call Out of press when it comes to a piece of news. It’s the second and third callout outfits that are basically drinking the backwash.

RxMuscle, like Nick’s Strength And Power, pride themselves on breaking stories. I can’t speak much to NS&P’s accuracy because I don’t really watch his videos, but having a history with RX, I know all too well how often they’re dead wrong in their reporting. They may be the first to publish, but they also routinely end up looking silly, having to make retractions and employing varying degrees of damage control to save face. Nonetheless, Dave Palumbo cannot allow a kid making videos in his garage to get more eyes on his videos than his. Pride’s in the driver’s seat, with journalistic integrity and due diligence riding behind, in the trunk.

But wait! How can I say RXMuscle and/or Nick’s Strength And Power lack journalistic integrity? Well, let’s address it. First of all, what I’m stating is my opinion and we all have our own, but let’s see if I can’t make a persuasive argument for my position. Ok, here goes. 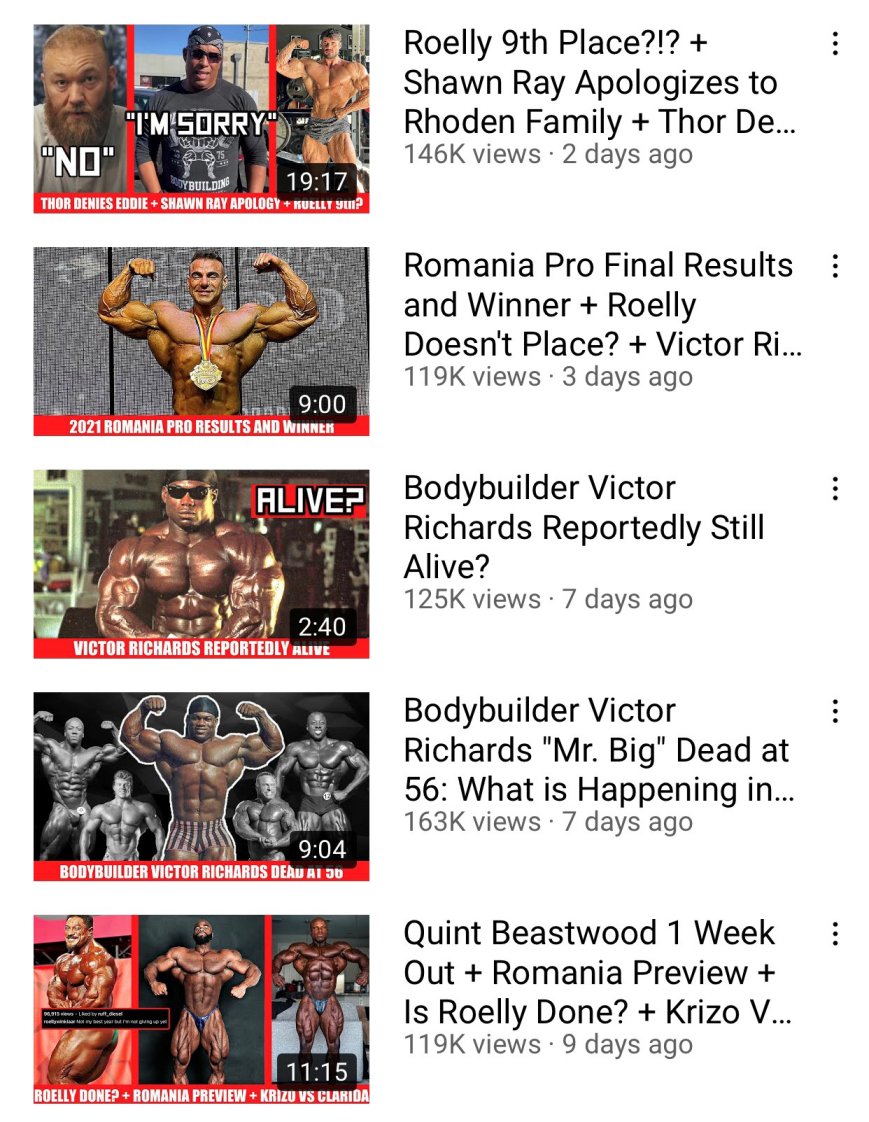 I woke up at 5AM to go do my cardio and lift at the local gym and I opened up Instagram. One of the first things I saw was a story posted on the Evolution Of Bodybuilding page. EOB is one of the premier bodybuilding websites in the world. Kevin Grech, it’s owner and operator, is known for giving all federations equal coverage. He’s out of Malta and puts his heart and soul into everything he does. So, naturally, when I see that EOB has posted a story, I want to see what’s up. Well, as it turns out, he put out a story asking a very fair and reasonable question. Why were videos on RX and on NS&P still up regarding the death of the legend, Victor Richards?

Two such videos on Nick’s Strength And Power remained available as of press time. One titled “Mr. Big Dead at 56,” with 163,000 views (in 7 days) and “Bodybuilder Victor Richards Still Alive?” with 125,000 views. While follow-up coverage from Miller would confirm Richards to be alive and well, what’s to say that viewers who watched either of the previous videos would also watch the one where the real news was contained? It’s a disservice to the fans to have videos with this many views, still circulating, with false news. Also, the sheer number of hits they’ve earned, will likely put them at the very top of search results. Nick Miller is a one man operation and he could easily remove these two videos with a couple mouse clicks – so why hasn’t he?

Both of Nick’s videos and all three of RX’s videos are 7 days old, proving my theory about how these clickbait sites operate, but more importantly and distressingly, is the fact both have had equal time to act, and neither has. Could it be because the videos are still getting traffic and generating revenue, despite putting out misinformation, days after the truth has been universally accepted?

Would these facts put RX’s and Nick Miller’s journalistic integrity, at least partially, in question? I can’t speak for you, but as far as I’m concerned, I think Kevin Grech’s question is very much on the money. Why are these videos still up? I say for hits and dollars, but maybe you say something else. To each their own.